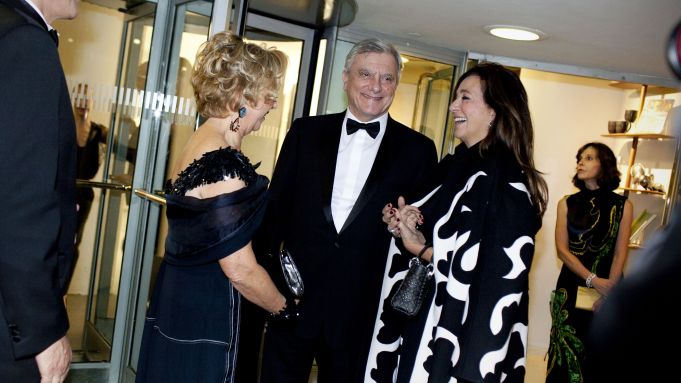 “You want to do the interview?”

In his final night of hosting duties for the annual Dior-sponsored Guggenheim International Gala, outgoing Dior chief executive officer Sidney Toledano was (jokingly) attempting to pass interviews off to his colleagues.

The brand’s continued relationship with the Guggenheim Museum results in a two-night affair: a more casual, hip dance party the first night, followed by a black-tie gala for esteemed museum members, celebrities and, importantly, artists, in the impressive rotunda. Ever the host, Toledano was making sure everything was in order before guests streamed in.

“I was checking the room. It’s nice — I love this room. I love the museum,” he said, early in the evening on Thursday.

After being honored at the Trophée des Arts gala earlier this week and socializing with guests at the pre-party the night before, Toledano has had quite the week. His highlight from the previous evening?

“The singers!” he said of Haim, who took over the rotunda on Wednesday with a mix of songs from their first and second albums, as well as a Tom Petty cover. “Although, don’t ask me which song. I heard about them before but it was the first time I’d seen them onstage. And frankly, I loved the energy and I like the name they have — [it] means ‘life.’ You didn’t know that? It means ‘life.’ It’s one of the most important words in Hebrew. ‘Haim.’ And to see three sisters…I imagine the pride of the father or the mother, having three artists.”

Which, naturally, was the perfect transition into Dior’s role in the arts. “You know, Maria Grazia, she had this claim at the last show ‘Why have there been no great women artists?’ She was answered last night — she had three!” he said.

“Mr. Dior, as you know, was a gallerist before being a couturier. If you see the list of artists he worked with — he had two galleries. So it’s natural for the house to be connected to galleries, painters, artists — this is part of the DNA and the story of Mr. Dior — and also all the designers after Mr. Dior. Art inspiring fashion and fashion inspiring art. We just had this exhibition in Paris — it’s not finished yet — where you see Mr. Dior, couturier…it’s the designer of dreams. Not the dreams of a designer; designer of dreams. And I think art is giving humanity this kind of vision of the world that is for me…yes we do important work, but artists are bringing so much. For Dior, this aspect of the company is so important. At Guggenheim, the museum itself the location, the artist, the show, it’s something where, when Richard Armstrong proposed me to do this partnership, it was important. And every year we enjoy it so much.”