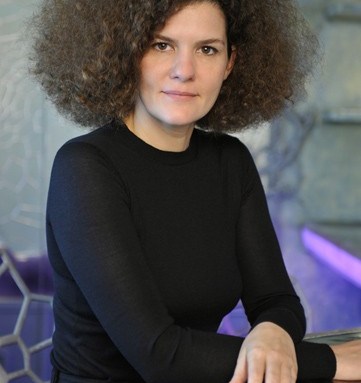 PARIS — “I just love to put on a T-shirt and overalls, and work with my fellow craftsmen,” says French interior designer Roxane Rodriguez over coffee at Ladurée, the iconic Parisian patisserie chain, whose shops she has been designing since 2000. In everyday life, Rodriguez, who is also an antique dealer, can usually be found dressed in stilettos and frocks by Martin Margiela, her favorite designer. But she’s just as happy to pitch in on the sandpapering for projects like Bar Ladurée, a new restaurant that opened last week just around the corner from the Ladurée tea salon on the Champs-Elysées.

For this latest endeavor, Rodriguez mixed futuristic techniques with romantic design details to achieve an otherworldly atmosphere. The walls are covered with stained glass, in which butterflies are trapped, and the long resin bar undulates through the room, encircled by metallic stools that resemble chrysalises. “It’s a timeless decor — a very different vision of Ladurée,” says the 37-year-old designer, smoothing back her crop of curly hair.

As the only child of antique dealers, Rodriguez grew up helping her father with the family business in the outskirts of Paris. She opened her own antique shop in 1997 in the ninth arrondissement, which was quickly followed by a book, “Le Japonisme.” And she garnered further attention for being the youngest exhibitor at the 2004 Biennale des Antiquaires, where her booth included a rare Edouard Lièvre piece.

Now, however, Rodriguez devotes most of her energy to interior decorating projects, including those for private clients. “I’m fond of the 19th century, but I like

everything,” she says of her aesthetic.

It’s true that for Ladurée, her work ranges from creating a cave-like decor (albeit in gleaming gold) to display the famous macaroons at London’s Burlington Arcade location to using Marie Antoinette as the muse for the recently opened Tokyo Ginza outpost.

And the coming year should be equally busy: Rodriguez has four more Ladurée projects on her plate — in Dubai, Kuwait, Bahrain and London — as well as a limited edition line of furniture she’s launching.