With the monopoly that downtown seems to hold on the city's nightlife, one wonders: If a bar opens above 34th Street, does it make a sound? 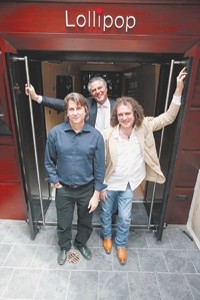 NEW YORK — With the monopoly that downtown seems to hold on the city’s nightlife, one wonders: If a bar opens above 34th Street, does it make a sound?

Lollipop, a new lounge on East 61st Street opening tonight, is about to find out. But having architect and designer David Rockwell and restaurateurs Vittorio Assaf and Fabio Granato of Serafina behind it should help create some buzz. The long, narrow space — a “teeny” 1,000 square feet, Rockwell says — is awash in candy colors. Panels of the iconic lips-and-lollipop image from the film “Lolita” hang on the walls. “Don’t read into it,” Assaf says. “It’s like dolce vita, in a way.”

“I wanted it to be like a candy shop for grown-ups,” Rockwell explains. To make the point, he coated the interior in swirling shades of red and installed a transparent resin bar top reminiscent of a cherry Jolly Rancher.

The menu of Vietnamese and Thai small plates is equally whimsical. Lobster, Kobe beef and chicken “lollipops” will be served until about 11:30 p.m., and a long list of martinis mixed with exotic ingredients, including Thai basil and aloe vera, will be poured throughout the evening.

Even though he is the father of young children, Rockwell didn’t turn to flicks like “Willy Wonka and the Chocolate Factory” for inspiration. Instead, he was influenced by one of his upcoming projects: the set for the Broadway production of “Legally Blonde — The Musical.” “Designing both at the same time certainly helped,” he says. “Elle Woods would be very comfortable here.”