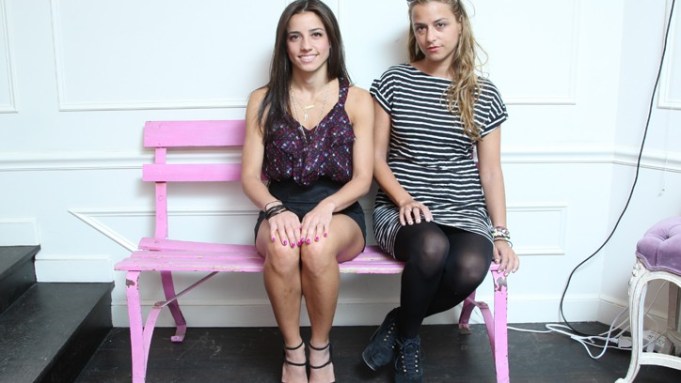 Ever since their days at Nightingale-Bamford, BFFs Shoshanna Lonstein Gruss and Charlotte Ronson have been those girls. You know, the ones who are invited to every party but still get good grades and are liked (and copied) by everyone else. And if New York City is like high school, as so many people say, then it’s still the case — and they both have a loyal following of customers for their eponymous fashion lines to prove it. Ronson is the downtown wild child with sun-streaked hair who rarely wears makeup and can often be found in the company of her multitalented siblings (DJs Samantha and Alexander, producer Mark and sometime-model Annabelle). Gruss is a manicured Upper East Sider with the perfect blowout who spends time with husband Josh and baby Sienna when she’s not on the charity circuit. “It’s funny, I get really defensive when people say we are so different. But people judge books by their covers,” says Gruss.

“We have so much in common,” adds Ronson.

Now even more so because the pair are collaborating on a bathing suit and beach line for grown-up girls and their mini-me daughters called Shoshanna Made With Love Charlotte Ronson, now retailing from $60 to $140 at stores including Bloomingdale’s, Saks Fifth Avenue and online retailer Shopbop.com. A few days before tonight’s official launch party at the Thompson LES, Ronson and Gruss — who grew up on the beaches of East Hampton and St. Barth’s — sat down with WWD to talk about girl-watching in Mexico, tanning techniques and bikini blunders.

WWD: How was working together?
Shoshanna Lonstein Gruss: It was really fun. I have my specific customer, and this gave me the opportunity to have a little more fun. People were like, ‘Oh, you’re doing it with Charlotte, you can be cooler.’
Charlotte Ronson: She brought the expertise, and also the outlets. Just doing clothes and shoes, I was working with different buyers. It was a win-win.

WWD: So, to wear a string bikini or not? You make all different styles.
C.R.: String. I like when it ties. You can open it, tighten it, loosen it depending on what’s going on. [laughs]
S.L.G.: She can get away with just the string. I need a little more support. Of course, I like to match with Sienna — and Charlotte. We were just at a wedding in Mexico together and we wore our [Made With Love] bathing suits.
C.R.: We were staying in the same room, so it was like, ‘What are you wearing today?’ And we saw girls on the beach wearing our suits.
S.L.G.: I always take pictures of people in my stuff, so it looks like I’m taking pictures of girls in bikinis — I chase them. It’s the worst in a hotel, because I’m at the pool and I’m hunting them down.

WWD: Are you swimmers?
S.L.G.: We are always the only girls who go into the ocean a hundred times. Other girls won’t — I always feel like it’s their hair.
C.R.: They are like, ‘I need to get my conditioner.’

WWD: What’s your stance on accessorizing bikinis?
S.L.G.: I’m a beach gold girl. I like to be in the ocean with my necklaces.
C.R.: I take everything off, because I’ll lose it or something will happen.

WWD: Have you ever had any bikini wardrobe malfunctions?
S.L.G.: I did actually lose my top once in seventh grade, and I stayed in the ocean for three hours, waiting for my parents to come. No one would help me because I was with all guys. I was like, ‘I’m just going to drown. I’ve had 13 good years.’