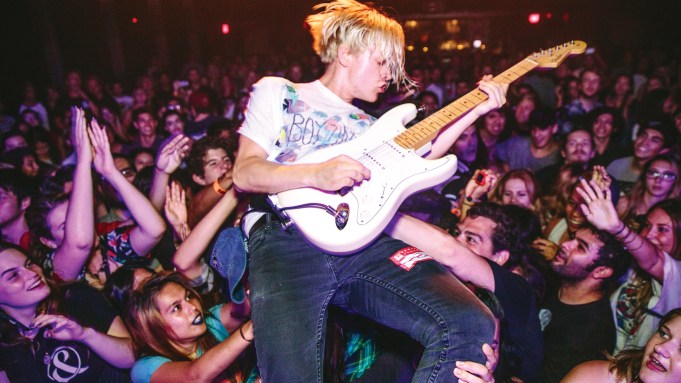 Cole Becker owes the makers of Manic Panic a muffin basket. It was his chartreuse-tinged locks, a DIY job done out of impulse and boredom that ruined his bathroom sink in Oakland, Calif., that got him cast in the Saint Laurent spring men’s show and from which a sort of partnership with Hedi Slimane would flourish.

“I knew the name ‘Saint Laurent’ — I had seen the B-list movie about Yves,” Becker, 20, says, sitting on a leather couch, having just arrived to his WWD photo shoot. He’s sporting sparkly nail polish, a vintage Queen Latifah T-shirt and, yes, green hair. “But we just knew it was fashion.”

Cole, 20, his brother Max Becker, 22, as well as Joey Armstrong and Seb Mueller, both 20, make up SWMRS, the second iteration of a band they formed in childhood. Their debut album as the reimagined (and vowel-free) SWMRS, titled “Drive North,” is due out Feb. 12. They’re Bay Area punk rock boys who may have vintage sweaters and dirty Vans spilling out of their closets but who unwind with Tchaikovsky’s compositions and read Toni Morrison aboard the tour bus. And apparently gave Slimane quite the jolt of inspiration.

It was last year and the designer was in Santa Ana at the Burgerama Music Festival to see French singer Soko perform. “He saw us loading up our stuff, and I had bright green hair and Max had electric blue hair and he was like, ‘Oh my god, I need to shoot them, I want them,'” Cole says, sliding into a French accent. “And we were like, ‘Who the f–k is this guy?'”

They soon received a call that Slimane wanted to shoot them for his Diary [the designer’s decade-old blog], “in our regular clothes,” Cole says. At the end of the shoot, Slimane told them he had a secondary motivation in getting the boys together: He wanted them to provide the soundtrack to the upcoming men’s show.

“So we drank a bunch of 40 water [alcohol] and went into Joey’s basement,” Cole says. “And banged out a 20-minute extension of a song.”

The soundtrack wasn’t their only contribution. “They asked Max and I to model in the [spring men’s] campaign and then to walk in the show and that was absurd, and even more absurd was they saw my journal, and I do these stupid doodles, and they were like, ‘We want you to make drawings and we’ll, like, pay you,'” Cole says. “So it turned into a whole relationship.” The relationship is ongoing, as the band is set to play Saint Laurent’s Palladium show in Los Angeles tonight.

Cole and Max contend that the spring men’s collection bore some strong similarities to the SWMRS boys’ own looks, as fashion-apathetic as they claim to be. “It was a nod to our style,” Cole says. “The sweaters all looked like my sh—y old sweaters, they made all the shoes very dirty white. And they dyed a bunch of models’ hair green.” The origin behind the shade? “Well, I didn’t want to do what he’s doing,” Cole says, nodding to his brother Max (he’s since gone back to blonde). “But green’s a little grosser and that definitely fits to mypersonality — I’m very scraggly and unkempt.”

After the show, they were expectedly bestowed some Saint Laurent duds. “They sent us jackets, and they’re all super nice and flashy, so I don’t wear any of them,” Cole says. “I brought the leopard bomber to New York because I heard everybody dresses really nicely in New York.”

Unnatural hair hues and holey, Cobain-esque sweaters aside, Slimane also seems drawn to the boys’ youthful energy. They’re all about having fun.

The group grew up together in Oakland; their parents are friends and the playdates started early. “Joey’s fourth birthday is our first memory of hanging out,” Cole says. “Our little brothers are ten days apart, our moms were pregnant together,” Armstrong adds. “We live five minutes away from each other, we started playing sports with each other when we were, like, three or four, and it just progressed.”

Their foray into music came, inspiration-wise at least, at the hands of Jack Black. “‘School of Rock’ came out, and we saw that kids our age were making and writing music,” Cole says. “We were like 8 or 9, and they were 10, so it was like, ‘We could do this.’ We recorded our first demo when we were that young.”

Armstrong’s musical lineage also helped. His father is Billie Joe Armstrong, the lead singer of Green Day. The similarities are apparent not only in the Nineties-esque punk-pseudo-grunge look the boys work, but also in their sound. That sound was born more so out of their limitations than their skill set. “We couldn’t play our instruments well enough to do anything technical,” Cole continues. “So our sound was somewhere in between The Ramones and the ‘School of Rock’ soundtrack.”

“Max and I started writing songs on acoustic guitar,” Cole says. “Because we were inspired by ‘School of Rock,’ it was never a question of if we’d play other people’s songs. We always knew we’d play our own songs.”

The result was Emily’s Army, a band the Becker boys and Armstrong formed in 2004 to success. (Emily is a beloved family friend of the boys.) “It was like, we’d be high school students during the school year and play shows on weekends and during summer. When some kids went to summer camp, we got to go on tour,” Armstrong says. “And we were, like, 14 years old.”

Emily’s Army produced two albums and completed two Warped Tours — but as their years at Piedmont High School dwindled, so too did the “School of Rock” influence. “After we graduated we wanted to start a new project,” Cole says. “I feel like when you’re 14 years old the only thing you can really do is pop-punk,” Max adds. “Now we’re broader than that.”

With the end of high school and the addition of Mueller to the mix full-time, it came time to re-brand. “It gave us a clean slate to work with as we entered adulthood and had a completely different set of tastes,” Cole says of the name change. “We were driving down the peninsula, on the beach, and we were, like, we need to change our name, what should it be?” Armstrong says. “The seagulls, the palm trees, the pelicans…and then all of a sudden we were like, ‘Let’s just be swimmers.'”

As for the lack of vowels? “It’s easier to stand out,” Max says. “Plus we got sick of typing in ‘swimmers’ on Google or Instagram and getting all these images of Michael Phelps,” says Armstrong. “Also, it looks better as a tattoo.”