The former "Community" star on facing her fears of improv and being the most-hated girl on "Girls." 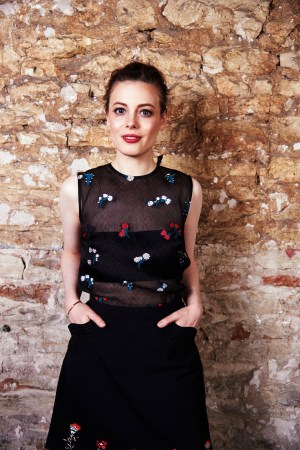 WWD chatted with the Juilliard-trained actress — and four-time South by attendee — about the importance of sensible footwear, facing her fear of improv and being the most hated girl on “Girls.”

WWD: Smart choice: pairing your Kenzo two-piece with Air Max 1s.
Gillian Jacobs: I think after the first Comic Con I went to, I learned that you have to have a pair of flats with you. Have to. It’s a bonus if they’re cute.

WWD: Had you ever done improv before this film?
G.J.: I grew up loving Monty Python and Christopher Guest movies but I’d never done it formally, so I’d always been scared by it. When I got this movie, it was like, oh God, now I have to face this fear.

WWD: How did you conquer your fear?
G.J.: Mike [Birbiglia] set up two weeks of rehearsal, we had improv workshops and we performed as a group in New York. My heart would be pounding every time. I was so lucky to be surrounded by the most supportive, kind, talented people in this cast who just would pick me up whenever I fell.

WWD: When you entered Juilliard, did you think you were going to end up doing so much comedy?
G.J.: No! I really thought I was going to spend my life doing classical theater. But I didn’t have such a good time [at Juilliard]. I just felt like, ‘Oh, I can’t act on stage.’ So right out of school, I sort of made a right turn away from what I grew up doing. I did a few plays in New York, but I’ve never done a Shakespeare play since I graduated college.

WWD: After your stint on “Community,” you had a memorable turn on “Girls.”
G.J.: I knew going in, being the next girl that Adam [Driver] dated was not going to stand me in good stead with a lot of fans. But I felt like it was a great character, and I wanted to be on the show. So I was like, ‘OK, I’ll be the one everybody hates. I can handle it.’

WWD: Speaking of your name, how often do you have to correct people’s pronunciation?
G.J.: Oh my gosh, like every day of my life. [It’s pronounced like] “gills” on a fish.

WWD: What’s next for you?
G.J.: I’m shooting the second season of [the Judd Apatow-produced Netflix show] “Love” right now. And I have another film, “Dean,” [directed by comedian Demetri Martin] which is going to be at the Tribeca Film Festival.