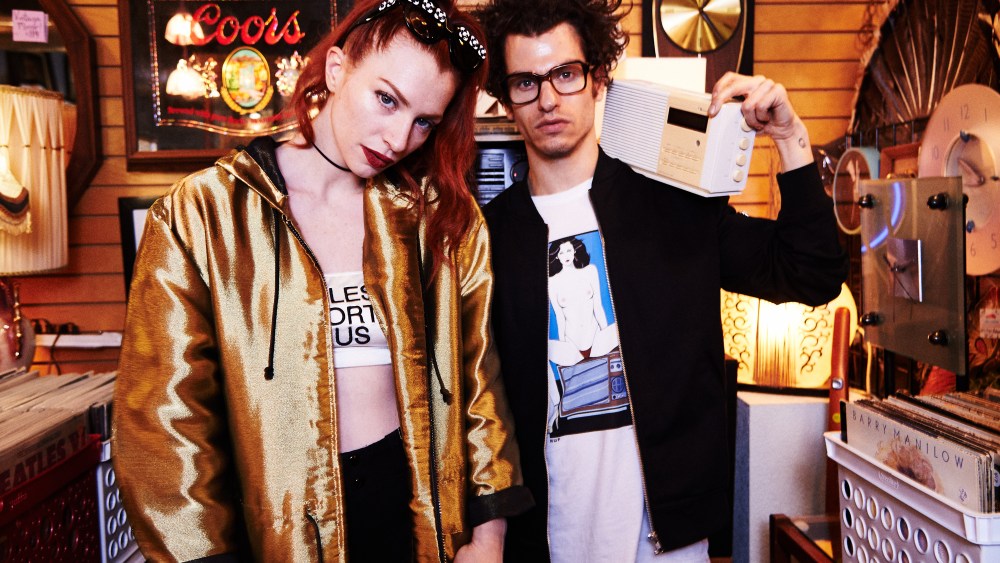 Zoe Silverman, one half of New York-based electronic duo ASTR along with Adam Pallin, came prepared to perform at SxSW, thanks to stylist Marcelo Gaia, who loaded up her luggage with freebies from “so dope” Asos, along with vintage wares. “I’m, like, new stuff? No, I want to see the old cool stuff,” Silverman said.

A rising star can never have enough clothes. Donning a gold Michael Kors jacket, Diesel boots, V Files bra top, black vintage shorts and Prada sunglasses, Silverman sifted through the racks at local odds-and-ends shop, Off the Wall. “I’m really a tomboy, but I’m influenced by the Nineties vibes, a mix between Aaliyah and Gwen Stefani I would say,” she said of her style. “For the last tour, we designed a lot of stuff ourselves, like painted-on jackets. It’s one-of-a-kind, and it just feels more us to destroy things ourselves.” The New York-bred redhead continued, “I’m someone who’s very shy of high heels and too much high fashion-y, can’t walk around. We want to be accessible. We don’t want it to be so far away that it’s not real.”

Keeping it real is important to the daughter of Tom Silverman, the founder of hip-hop label Tommy Boy Records, who insists nepotism did not play a part in the band’s success. “That might have happened in a different era, like your dad could pay for you to get somewhere, but I don’t believe in that now. I’m like, ‘Honey, come to a show. We’ll show you. We’ll dance, we’ll sing. You can hear me live. It’s the age of transparency. You can just see when something’s genuine,” asserted the Berklee College of Music dropout and Snapchat aficionado.

Although she admits that growing up around a lot of young rappers influenced her sound. “I think [my dad is] really proud. He can definitely hear the roots of house music and the hip-hop that I was around when I was young, but there’s also a pop element to it,” said Silverman, former member of a teen pop band. “One day I feel like it’s all going to come to surface, and I’m going to go running. You have to do a lot of bad stuff and that’s fine. I would make a band out of anything since I was a kid.”

Not much has changed. A couple of years ago, Silverman met the mop-topped, bespectacled philosophy major in yoga class and soon after, they formed ASTR. “It sounds so douchey to be honest. We were in the [yoga studio] cafe and we had a friend in common,” said Silverman, a yoga instructor at the time. Things have remained strictly professional ever since. “We’re not dating. We’re actually good friends,” she clarified.

The duo — loosely named after Asteria, the Greek goddess of the stars — have released two EPs, “Varsity” and “Homecoming” and are working on their first full-length album. “If we do another EP, it’ll be called ‘JV Tennis,’” cracked Pallin of the high school-themed titles. The twosome also gained attention with covers of songs like Drake’s “I’m Coming Home” and Rae Sremmurd’s “No Type.” “We were at Facebook [SXSW outpost] yesterday, and [Rae Stremmurd] came in afterwards, and we ended up shutting down the offices and the street, basically turning it into a dance party,” shared Pallin, in between puffs on his vaporizer. Silverman added, “It was insane. People were like, ‘Rae Stremmurd!’ We were like, ‘Highlight, day one.’”