The 22-year-old dishes on prank-calling with Jonah Hill and writing her own roles. 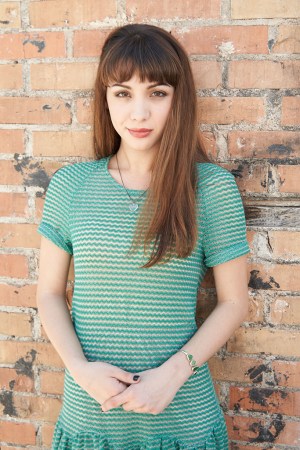 True to the Hollywood trope, former child actor Hannah Marks, now 22, returns to high school for her role in the coming-of-age fan-fiction comedy “Slash,” which premiered Sunday afternoon in Austin, Tex. during the South by Southwest Festival. “We’re very internet, very Tumblr,” joked an Opening Ceremony-clad Marks, acknowledging the “Interactive” portion of the festival, held concurrently with the film pillar.

WWD chatted with the South-by newbie in the historic Driskill Hotel on bustling 6th Street about making prank phone calls with Jonah Hill, surviving the child actor curse and suffering for her art (literally).

WWD: How did you dive into the fan-fic subculture?
Hannah Marks: We went to a real comic convention in Houston and we dressed up. I look up to nerd culture. I’m a fangirl myself, so I really related to everything our characters were doing. I hope people become fans of the fictional characters [we play in the film]. That would be really fun.

WWD: You really rocked those elf ears [part of her character’s convention get-up].
H.M.: I’m allergic to latex so my ears got all red and burnt. Half the time I was holding the ears in the scenes because they were painful, actually.

WWD: Was that your first allergic reaction on set?
H.M.: My very first movie was called “Danika” with Marisa Tomei. I played a ghost that was haunting her, so they gave me a slit neck and when they took it off I had welts everywhere.

WWD: How did you approach the film’s romance angle?
H.M.: We wanted it to be a love story that felt honest and unconventional without trying to be unconventional. I didn’t want to be some manic-pixie-dreamgirl type. That’s ridiculous.

WWD: One of your big breaks was in “Accepted.” What was that experience like?
H.M.: My parents took all these pictures of me with Jonah Hill and it was before he was famous so they cropped him out of every picture. Both he and Justin Long would prank-call my guy friends on my flip phone and say, “Hannah has a crush on you” and hang up.

WWD: That sounds embarrassing.
H.M.: Not if it’s Jonah Hill and Justin Long! And I babysat Blake Lively’s dog. It was a really memorable experience for me.

WWD: How did you survive the child actor curse?
H.M.: I wish puberty wasn’t onscreen for me. It definitely gives you a warped perception because I felt like I was old just because I was 13. I was like, “The good old days of 12.” It’s a really messed up thing when it comes to aging.

WWD: What’s next for you?
H.M.: I wrote a movie almost four years ago and we’re making it in May and I get to star in it. It’s like a female “Superbad.” A lot of my idols are people like Lena Dunham, Tina Fey, Greta Gerwig, Brit Marling — all the girls that write, direct and act. I’m trying to get an early start on that.