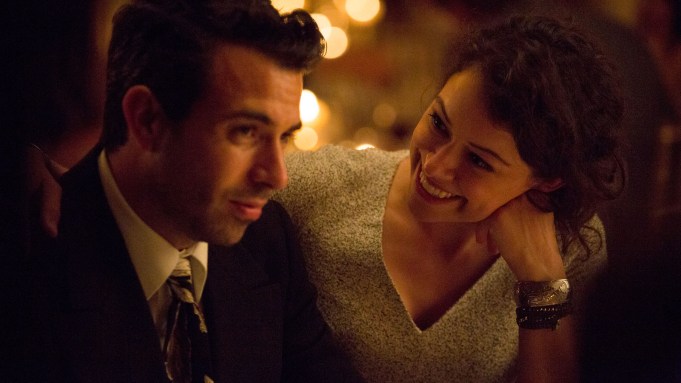 Most people know Tatiana Maslany as the star of BBC America’s “Orphan Black,” but they may be less familiar with her real-life beau, Welsh actor Tom Cullen. In 2011, Cullen made waves at South by Southwest Film Festival for his role in “Weekend,” which scored an Audience Award. The rub: still a struggling actor/waiter, he couldn’t afford to pay for a flight to Austin to soak up the adulation in person. “That was my first-ever job, so none of us had enough money to fly out here,” he explained on the rooftop of Buckshot, a rowdy bar in downtown Austin.

Five years later, Cullen is making up for lost time in the laid-back Texas town with girlfriend Maslany in tow to debut writer-director Joey Klein’s drama “The Other Half,” which they also executive produced. The couple, who met on the set of the miniseries “World Without End” in Budapest five years ago, star as tortured souls who fall in love in.

To play the role of Nickie, an alcoholic struggling to accept the loss of his brother, Cullen got his inspiration from animals. “Often prey disguise themselves as predators to ward off being eaten alive, so I used that for Nickie,” he explains. “I wanted him to look aggressive and kind of stick his middle finger up to anyone who comes near him to ward them off because he’s terrified inside,” he added.

The heaviness of the material could have been enough to break up even the strongest of couples. But Maslany, who plays a bipolar painter in the film, called the experience of working with her boyfriend “the most joyful, rewarding experience of my career for sure.” She shared, “I was really scared to do this initially because we know each other so well and it could have been too difficult, too intimate, [but] getting to work opposite of someone who challenges me and scares me and makes me feel safe at the same time — it was really rewarding.”

But she admits her day job on the critically acclaimed “Orphan Black” is pretty cool, too. “Getting to inhabit such different characters — that’s the most fun thing as an actor, to physically transform and internally transform,” said the Canadian actress, who plays several clones on the sci-fi thriller. Cullen brags, “I don’t know another actor who can do what Tatiana does.”

Next, Maslany will flex her acting chops alongside Jake Gyllenhaal in the David Gordon Green-helmed “Stronger,” based on the Boston marathon bombing. “I’m so excited to get in the ring with him,” she said of working with Gyllenhaal. The only challenge of staying so busy: packing for back-to-back trips. “It’s mostly Adidas stuff. Basically any time Tom buys me something it’s Adidas,” said Maslany.

Cullen is staying busy, too, with diverse roles in U.K. web thriller series “The Five”; “A Hundred Streets,” a drama starring Idris Elba; “Happily Ever After,” a romantic comedy; and “Black Mountain Poets,” which also premiered during SXSW. “It was shot in five days, it was improvised and I did it purely because I wanted to scare the crap out of myself,” said Cullen.

Indeed, comfortable footwear is key for a couple that has been going to bed at 5 a.m. every night. “I always get massive FOMO,” said Cullen, whose fest highlight so far was watching “Willie f-ckng Nelson” perform on Sunday night. “I owe so much of my life to this festival. That’s why we’re not sleeping because we just want to eek out the most of it.”