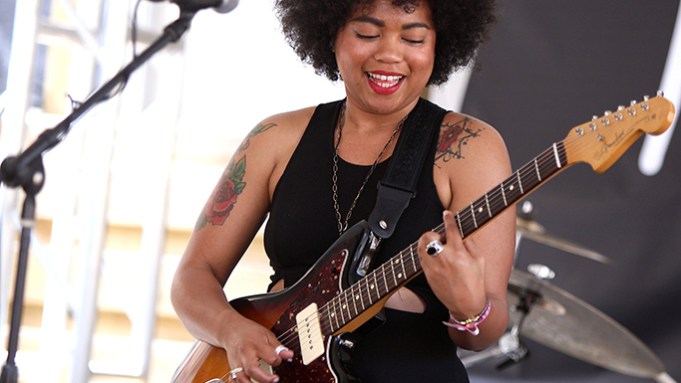 Days before AJ Haynes, frontwoman of the Shreveport, La.-based band, Seratones, performed a rousing set at Clive Bar in Austin, Tex. on Wednesday afternoon, she thwarted a major sartorial disaster. The culprit: a missing black Ariat cowboy boot. “I had to go pick up some guitar strings and picks and had my boots off in the van, and when I opened the door one fell out. It was tragic,” recalled Haynes during a chat with WWD in the rustic-chic lobby of the South Congress Hotel.

Crisis averted thanks to her stealth bandmates, who returned to the scene of the crime and spotted the missing boot under a tire. “This one got run over and it’s still good,” she said, raising one leg in the air as proof. “I need an endorsement from these guys. Holla! They last forever so there’s not a need [to ask for free boots] unless they want to send me some nice red ones,” she cracked.

Endorsement deals could be in the near future for Haynes, as the band is in town to play four shows as part of their first official South by showcase before the release of their debut album, “Get Gone,” on May 6. They even squeezed in a video shoot for their latest single, “Chandelier.” The theme: “It’s just swag,” said Haynes with a laugh, before summing up the quartet’s overall sound: “It’s rock ‘n roll and everything that comes with it. We have a lot of different influences. I’m really on this huge Ethiopian jazz and Brazilian kick.” But to be sure, the deep blues, R&B and country roots of their hometown seep their way into their sound.

The band formed a couple of years ago, but the foursome played in several different configurations both together and separately over the last decade, including perhaps most notably, the punk rock outfit AJ Haynes and the Sh-t for Brains. They cut their teeth playing at local casinos, an experience that Haynes, for one, is glad to leave behind. “It was awful, but it paid for instruments and bills,” she said. Instead, they prefer Shreveport spots like Man Cave, a converted outdoor shed run by a fellow musician.

Haynes brought a piece of home with her to Austin in the form of “my baby horse skull that I just love to have with me,” which she put on full display during her shows in Austin. “I like to put it on the amp or the dashboard,” she said, admitting she has a dark side as evidenced in the title of their single, “Necromancer.” She also dons a necklace made from cat vertebrae. “I like totemic jewelry that reminds you of death because it’s part of life,” she noted.

There will be many more adventures ahead for Haynes — and her skull. First, she will shoot a leading role in her first film, “Electric Blue.” “It’s set in New Orleans in the Eighties. My character’s a lead singer of a punk band and she has to break a curse,” she says of the indie film. Then, she heads on a U.S. tour with The Dandy Warhols and Thao & The Get Down Stay Down, followed by a tour in the U.K. “You do all this work and you’re in the trenches and then you see it,” she says and snaps her fingers. “Sh-t, we’re going to Europe. Woo, it’s going to be a fun year!”