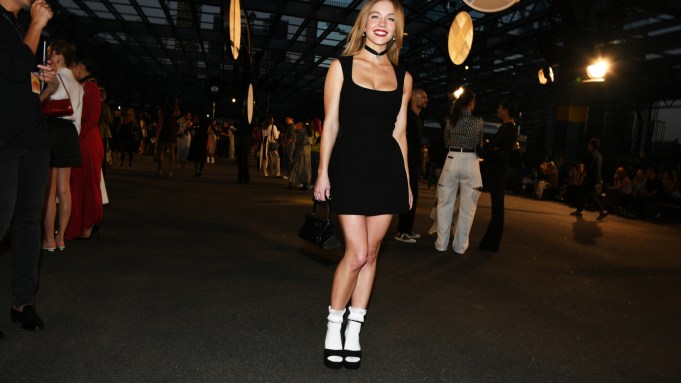 From the Emmys to Tory Burch: all in a day’s work for Sydney Sweeney. Monday evening the actress was in Los Angeles, dressed to the nines in an Oscar de la Renta gown, attending the Emmy Awards, where she was nominated for two roles — as Cassie in “Euphoria” and Olivia in “The White Lotus.” Come Tuesday night, however, Sweeney was in New York, looking fresh as can be and ready to take in the Tory Burch show (she is a face of the brand).

Sweeney joined fellow actors Thuso Mbedu, Jenna Coleman, Lana Condor and Chloe Fineman in the front row for the show. Fineman, a cast member on “Saturday Night Live,” was on the clock of sorts: earlier in the day on the Tory Burch Instagram account, a series of videos dropped featuring Fineman impersonating Burch, pretending to show the models how to walk and shoot the campaign herself. By nighttime, Fineman had switched back to her own clothes, though she was still working the cameras as Burch for some on-the-ground content.

Mbedu, who broke out in “The Underground Railroad” and will next be seen alongside Viola Davis in “The Woman King,” out this Friday, was making her fashion week debut at Tory Burch, taking in her first-ever show. “It’s not as crazy as we see in the movies,” she said of the experience thus far. “I can take it all in. It’s a doe-eyed, wide-eyed experience.”

Doing press for a movie as big as “The Woman King,” however, was by far the more chaotic of the two. “That is a pill and a half,” she said. “But I’m taking it in stride.”