The actress talks starring on Broadway and appearing in Kate Spade ads. 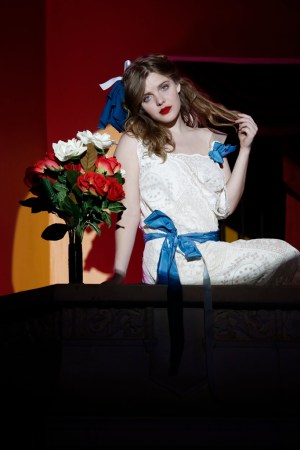 Syrie Moskowitz’s New York life is one that thousands of out-of-towners dream of, provided they have outrageous imaginations.

How such a self-contained, spirited twentysomething wound up headlining her Broadway debut in “The Midnight Frolic” is a tale in itself. But more on that later.

She also appears in Kate Spade’s spring ad campaign with Karlie Kloss and Iris Apfel, is the one-and-only subject of artist David Salle’s two new exhibitions, as well as being featured in an upcoming one for Jenny Morgan, and helped inspire violinist and composer Ittai Shapira, who plays Carnegie Hall for the first time May 14.

“It’s been the strangest spring. All these things keep happening. I feel like I’m living in late-19th-century Vienna or something. It’s like being Gustav Mahler’s wife Alma,” she said with a laugh, referring to the socialite composer who inspired her husband and other cultural icons of that time.

Moskowitz mentioned these various events in the course of conversation during a chance meeting at The Paris Review’s Spring revel. Far from boastful, the agent-less Bushwick resident shrugged off the attention with, “People just find me.”

Aside from her striking resemblance to Thomas, a former Ziegfeld girl and silent film star, Moskowitz said she has always had an affinity for Ziegfeld Folly Girls, so much so that her street art centered on them for years. The show’s casting director knew nothing of this before she was chosen — or the fact that Moskowitz’s birthday falls on the same day on the calendar that Thomas died under mysterious circumstances at the age of 25.

“I don’t fit into any one box. I’m an actress, but I model in a lot of different ways for painters and photographers. I direct films, music videos and commercials. I don’t fit anyone’s idea or concept of what you should be doing. I’m on the phone one day talking about doing a $30,000 music video and then they meet me and I’m this girl with ringlets. If they had met me beforehand, that wouldn’t have made any sense.”

“The Midnight Frolic,” an immersive theater piece that opens Saturday at the Liberty Theater, is also rooted in multimedia with shadow puppets, holograms, projected paintings and all sorts of visual distractions based on historical references. (Cell-phone use will be discouraged.) Created by Cynthia von Buhler, the play explores Thomas’ 1920 death and her actor husband Jack Pickford’s subsequent unraveling, a combination that some cite as among the first celebrity scandals. Thomas’ trajectory from anonymity to disenchanted fame is another theme that von Buhler expects will appeal to audience members. What’s-old-is-new can be found in the Twenties-inspired piano playing, which is also set to current songs like Sia’s “Chandelier” and Gotye’s “Somebody That I Used to Know.”

“The Twenties came out of extreme misery. It was just after World War I. People had lost so much and were so depressed and so miserable that all they did was explode out of it,” Moskowitz said. “We [as a nation] have been in this weird place where we’re at war, we’re not at war, we have a lot of things, but we don’t. And we glorify almost what’s not beautiful any more in a lot of ways. Our sense of beauty has become warped in a way. People are craving not vacuous beauty, but a deeper type of beauty. And authenticity.”

Theater-goers will be free to roam the expansive space to explore the story at their own pace, stopping at what is meant to be Montmartre’s Cabaret du Néant and the Hotel Ritz Paris, where Mary Pickford allegedly tried to save Thomas after she drank poison. Along the way, they can have a drink or dance with such characters as Fanny Brice, Josephine Baker, Eddie Cantor, Billie Burke, Alberto Vargas, Will Rogers and Marilyn Miller. Throughout each show, aerialists will whisk a few guests up to the theater’s ceiling in a chandelier that rises from the floor on panels. Several of the stunts are based on ones that were actually performed in The Midnight Frolic. Striving for historic authenticity, von Buhler created set models for each scene based on the ones designed by Frances Glessner Lee that are used to teach forensic studies today.

Walking through the set last week with her costar Joey Calveri, Moskowitz said, “Olive was a Ziegfeld girl who became [Florenz] Ziegfeld’s lover. Then she meets Jack Pickford, becomes a silent film star and they have this tumultuous relationship. They take a second honeymoon to Paris and end up having this night of complete debauchery.

“It was the first Hollywood scandal. They didn’t know if it was an accident, a suicide or a murder,” Calveri said. “She drank his syphilis medicine.”

“It was mercury bichloride,” Moskowitz explained. “It burned her from the inside out. She died of nephritis.”

After following the two actors into the dimly-lit Ritz-inspired lobby to pick up their hotel key, guests will stand outside the all-glass room nearby to watch the three scenarios of the death scene acted out while composer Billy Butler plays the piano and provides the only narrative. Therefore, guests will have different views of what happened based on when they arrive.

To research their roles, Moskowitz and her friend Haleigh Ciel, who plays Billie Burke, Ziegfeld’s third wife (who is better known as “Glinda the Good Witch” in the 1939 film of “The Wizard of Oz”) visited the Ziegfeld Theater on West 54th Street to check out the memorabilia displayed there. Near one of Lillian Lorraine’s gowns, they spotted an old business card for Nils Hanson, former director of the Ziegfeld Club, a nonprofit dedicated to former Ziegfeld Girls. “None of the numbers worked, so we Googled it and called a new number, which was for Laurie Sanderson [the group’s executive director],” said Moskowitz.

As it turned out, the Ziegfeld Club was gearing up for its April 27 relaunch party, which will include a musical performance by a few Radio City Rockettes wearing Ziegfeld Girl costumes. “Fun Home’s” composer Jeanine Tesoro will be on hand to unveil the club’s Florenz Ziegfeld award, a $10,000 cash prize to honor women creating new musical theater.

Moskowitz, meanwhile, related to Thomas’ ambition to become a film director. “People would say things to Olive like, ‘Isn’t that cute?” But I read her retorts and they were so intelligent and satirical, but kind. I find that a very interesting combination. She very much understood the time she was in. She didn’t try to change it. She tried to use it, but not in a Machiavellian way. I love that because I feel that I live that way, too. I’m never going to be able to change the scope of society, but I will do what I can to push it a little,” she said.