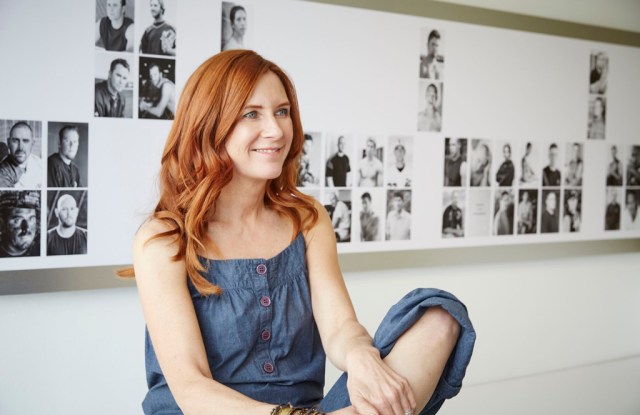 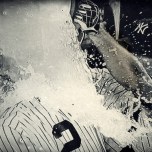 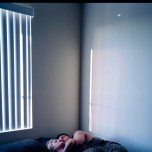 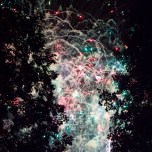 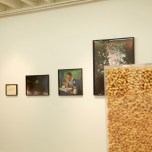 Tabitha Soren might know a thing or two about living a fantasy life. She once held the gaze of millions of viewers at MTV News, appeared in a Gap ad and married a best-selling author, yet it was only when she stepped from in front of the camera to behind one that she began to grasp the potential for not only her own life, but most of America’s.

In her photography exhibition titled “Fantasy Life” that opens Saturday at Los Angeles’ Kopeikin Gallery, Soren uses baseball as a metaphor for the uniquely American concept of Manifest Destiny, which, in her words, “propels us all to feel like we need to do something extraordinary.” She started by taking pictures of the Oakland Athletics’ draft class in 2003 and tracking their successes and failures through the years. (Three still play on Major League Baseball teams, another is homeless and the rest have found new livelihoods in coaching, stonemasonry, coal mining, wineries and insurance.) She even forced them to swap their Nike and Under Armour-branded clothes for plain white tank tops so her photos wouldn’t look cluttered. When boredom in the dugout moved her to experiment with taking an abstract image of bugs and dust floating in the light, she shifted from photojournalism to art. Then she diverged to interpreting fandom by taking tintypes of memorable sports scenes on TV and incorporating gold-painted peanuts and human bones in installations that comment on how, after much pain, only a few make it.

“In America, there’s almost a tyranny of individualism,” Soren says. “It’s not about just these guys. It’s about all of us striving for something: being special, feeling special, doing something great.”

Soren can turn to her own life for proof. Shuttling around the world with an Air Force dad, she stayed in houses that were decorated with nothing but piles of boxes. Fresh out of New York University, she interviewed former Presidents Clinton and George H.W. Bush for MTV’s presidential election coverage in 1992. She eventually married Michael Lewis, the chart-topping author of “Liar’s Poker,” “Moneyball” and “The Blind Side,” and provided the visuals for some of his articles in The New York Times Magazine. ESPN The Magazine and McSweeney’s also have published her work, and the New Orleans Museum of Art placed her photos of Hurricane Katrina in its permanent collection.

A journalism fellowship at Stanford University opened doors to art history and photography classes that formed the building blocks for her second career. One of Soren’s professors, Alex Nemerov, who also happens to be the nephew of photographer Diane Arbus, ended up consulting on her baseball series.

“It’s very hard for me to do something without ambition,” Soren says while on a break from hanging photos at the gallery. “I don’t know why that is. I’m just made that way. And the art world…really looks down on having ambition. It’s all supposed to be bohemian. ‘Oh, I just thought of this in a dream and I was playing around and this wonderful thing appeared.’”

She continues: “It’s hard for people to recontextualize someone. ‘What does this TV person have to do? Who does she think she is trying to make art?’ It’d be very easy to be condescending to me.”

To make her art, Soren found inspiration in various sources: portraiture as a documentation of transformation, seen in Rineke Dijkstra’s photographs of Israeli soldiers; limbs reaching for the heavens from a stolid center column shaped by 17th-century sculptor Gian Lorenzo Bernini; and the romanticism of the restless wanderer extolled by Jack Kerouac.

“There’s nothing romantic about sleeping in Super 8 motels or on buses,” she says of the routines endured by players like Nick Swisher and Joe Blanton, whom she tracked over a dozen years. “And they’re away from their families. There’s not much stability. Marriages and relationships just really falter. There are kids without their dads around for a long time. That’s not romantic. But it’s sort of all for the chance to do something special.”

Continuing her motif of visualizing psychological states — fight or flight in “Running,” panic attacks in “Panic Beach” and striving in “Fantasy Life” — Soren’s next project will integrate sculpture into her theories of how people adapt to technological domination. As for her own psychological state, she isn’t complaining. At 47, she still has the milky complexion and shiny russet-tinted tresses from her MTV days. Sporting a chambray jumpsuit and hot pink ankle boots at the gallery, she could pass for a trendy fashion blogger in L.A. — if she weren’t residing in the leafy hills of Berkeley, Calif., with Lewis and their children.

“In terms of me having a fantasy life, well, geez,” she says. “No mom would ever think that. Three kids. A husband who travels quite a bit. I work really hard to have a mix of things in my life. I don’t take the easy route.”

Despite her husband’s “Moneyball” fame and her kids’ schedules crammed with softball and Little League games, Soren can’t bring herself to say that she likes baseball now. She can impart the same advice to young players that a successful artist recently shared with her. “‘It’s a game of perseverance. It’s last woman standing,’” the photographer, whom she declined to name, told her. “I was like, indeed.”