Boys’ Night Out With Pete Hamill

The journalism veteran isn’t much of a believer in the afterlife, but his hypothetical version of heaven looks something like a city room. 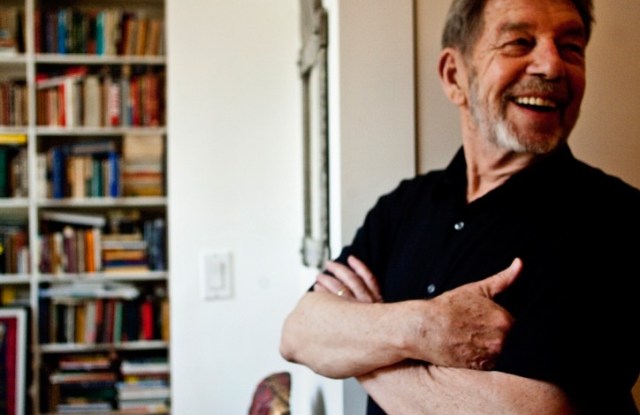 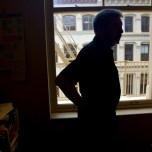 Pete Hamill isn’t much of a believer in the afterlife, but his hypothetical version of heaven looks something like a city room. “There’s going to be guys smoking everywhere and yelling obscenities at each other as the deadline comes,” Hamill told me. “That’s what it should be like. Who wants to be sitting around with Jerry Falwell? I’m sure if there’s a God, he’s sitting around with Lenny Bruce.”

It’s about what you would expect from a man for whom newspapers are religion. He actually looked a little like a priest, in a black short-sleeve shirt, black pants and black, slightly geriatric sneakers, when I met him at his apartment in TriBeCa, where his lives with his wife, Japanese journalist Fukiko Aoki. It was two days after his 76th birthday, or “my 50th anniversary of my 26th,” as Hamill preferred it. I found him in front of the TV, watching coverage of Michele Bachmann’s announcement of her presidential bid, with the New York Daily News on the coffee table and the walls lined with full bookcases. Hamill appeared to be a fan of Mexican art, some collected, some his own, including two unfinished paintings, one featuring a mermaid, “La Sirena,” which, as he told me, is a common motif on Mexican fortune-telling cards. What does it symbolize? “Probably fatalism, since it’s Mexico.” I was prepared to be enlightened.

Pete Hamill started as a high school dropout from Brooklyn, who went to work for the New York Post when it was owned by Dorothy Schiff and was New York’s most liberal paper. “But we also had William Buckley,” said Hamill.

He got his first byline in 1960 when someone called into the city desk to report a man sitting outside in the rain. Hamill was dispatched to the scene to find the man had been evicted from his apartment with his wife and kids. “By noon that day, there were three jobs offers for him, offers for apartments, et cetera, from the readers,” said Hamill. “In the history of the planet it’s a very tiny thing, but it changed the guy’s life. I used to get Christmas cards from his daughters 10 years later. That’s just a small example of what I learned early by what they mean by the power of the press. You can help people.”

That was a long time ago. Pete Hamill is old school. In newspaper terms he may define it. His brand of journalism was dignified; with it he wielded power and led a sexy life, traveling the world, covering wars in Vietnam, Lebanon and Northern Ireland, and ended up in plenty of glamour spots. “I went to work in Europe in 1963, and one night I found myself at a table with movie producer Joe Levine, who was a wonderful, insane guy, and Marcello Mastroianni, Federico Fellini, who was talking with me about comics, and Claudia Cardinale,” he said. “I remember sitting there one moment and thinking, ‘They’re paying me to do this?’ ”

He was one of the Post’s prized columnists when it was the home of columnists, and later went on to edit the paper — when it had the electric clappers on its chest and was being alternately killed and resuscitated — as he did the Daily News, all the while writing books. His 11th novel, “Tabloid City,” has just come out. As the title suggests, the story revolves around a New York City tabloid in 2009 and a double homicide. There are socialites, a hedge-fund scandal, terrorism and, of course, what you might call the changing landscape of print journalism. Hamill made a point to tell me it’s a novel, not an essay.

He said he didn’t want to come off as hopeless, not when he sees the passion of some of his students at New York University, where he teaches journalism. Besides, he believes journalism will flourish — he cited The New York Times’ hyper-local project, which is concentrated on a few blocks in the East Village and forces reporters to interact with their immediate surroundings. This is the kind of thing he feels the digital age threatened most, the human interaction of the city room, which hasn’t been the same since photographers stopped coming in to develop their film and tell someone what they had seen.

“They often cover three to four stories a day and know what’s going on out there in a way that the editor from Larchmont doesn’t.” I told him that my editor lives in Larchmont. “So quote me on that,” Hamill said.

As for the New York Post, “I root for it — it gave me my life,” said Hamill. As for what story he would like to be covering right now: Afghanistan. As for baseball, Hamill has lost interest since steroids changed the game.

Baseball isn’t the only game that he has let drift by him. Dominique Strauss-Kahn has been staying around the corner from Hamill’s apartment, and he’s actually met Anthony Weiner a few times casually, yet he found neither story line consuming. “Nothing surprises me, particularly men and their propensity to be fools,” said Hamill. “I’ve done it myself at different points; people do it all the time. What would Chaucer have written about if men were perfect? Why would we have ever invented the blues in this country if men were perfect?

“Gabriel García Márquez was a newspaperman originally in Colombia,” he said. “He talked about, and I agree, how everybody has a public life, a private life and a secret life. The public life, what he meant was if you take Lady Gaga to Elaine’s, you’re fair game. The private life is by invitation only. You can’t go hanging over a tree limb to photograph someone in the shower of their own home. The secret life, until very recently, has been nobody’s business. The secrets of what happens in a marriage, what is withheld and what is by mutual agreement not discussed.

“What would have been permissible last month would never have happened with Franklin Roosevelt,” said Hamill. “Even though he had mistresses here and there, even though Eleanor had a couple of lovers — gay or otherwise — doesn’t matter. Because there was a common agreement that this isn’t good for the country, it doesn’t affect his performance as president. What the hell is the difference?” Like I said, Pete Hamill is old school.

“Someone called me the day the Weiner thing was confirmed, and I said the only possible headline was ‘Schmuck.’ ” In his novel, he would have been right.