Chock-full of inspiration, the designer'sstudio packs a one-two punch. 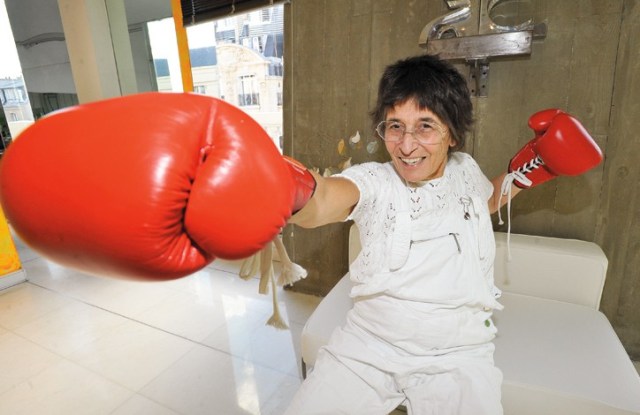 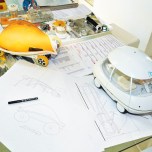 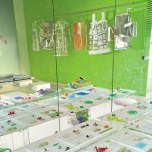 Overlooking the rooftops of Avenue Montaigne, Coqueline Courrèges’ vast white-tiled studio resembles a science lab–cum–art gallery more than a typical clothing atelier. As the longtime wife and creative partner of André Courrèges, the legendary designer and father of Space Age fashion, she has been deftly manning the ship since her husband retired from fashion in the late Nineties to focus on art projects.

A sloped concrete wall flanks the entrance to her light-filled office, which carries a series of abstract Plexiglas showcases, while a fun installation on a neon pink wall across the way traces the typical thinking process behind a Courrèges dress, going from a rack of silver CDs to a white shift sporting spangly circles. An exacting colorist, piles of industrial bits and bobs animate Courrèges’ central desk, grouped into eye-popping neon hues, while elsewhere a series of clinical white trays—bearing the likes of plastic tubes, knitting swatches and mini bottles of colored beads—serve as mood boards for future collections. Today the brand’s clothes, based on archive Courrèges designs, are sold in the Paris flagship and in 80 sales points across Japan.

“My office is a space for liberty and energy on which I impose an intention, a color, a material that I will rest my eyes on a thousand times a day. It looks like a monumental mess, but in reality, everything is programmed, organized,” says Courrèges, dressed in a pair of white dungarees and one of the house’s white knits. In late November, the 73-year-old dynamo released the first tome on her husband written by Erik Orsenna, which took 12 years to prepare.

A series of miniature bubble cars in one corner of the workspace, meanwhile, point to another of Courrèges’ enduring passions since 1969: the electric automobile. Having developed La Bulle (or The Bubble) in 2002, followed by La EXE in 2004 and La Zooop in 2006, Courrèges regularly drives to work in one of her prototypes. “I like setting off detonators that spark off ideas. My aim is to develop technologies adapted to green energies. Man’s main responsibility today is to develop new energy sources and respect the planet,” says the designer. “I continue to search and to [take on such challenges] because, since its creation, Courrèges has been interested in humans and the world.”

NEXT: “Winter Fashion, Art and Music” >>