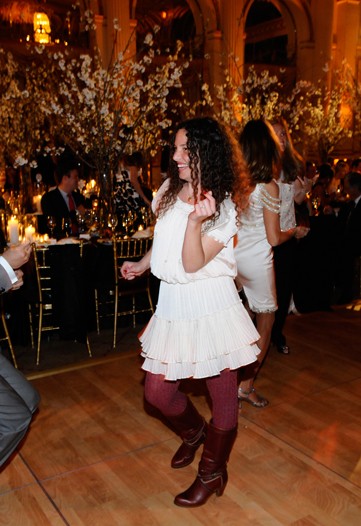 It’s not easy throwing a dressy fund-raiser these days (even if it is for a good cause), but the crowd at the Henry Street Settlement’s Dinner Dance, held on Wednesday in the Plaza’s Grand Ballroom, seemed more than game.

During cocktails, guests like Muffie Potter Aston, Gigi Mortimer and Dayssi Olarte de Kanavos hit up the silent auction. “I’m doing my part to keep spirits up,” said Jamee Gregory, as she made a beeline for a Canyon Ranch package.

The goodwill reached even higher levels during the seated dinner, when Jacqueline and Mortimer Sackler doubled the live auction’s offerings, donating a week-long stay at their four-bedroom villa in the Turks and Caicos just 20 minutes before bidding began. The whole thing went for a whopping $40,000.

Even Mayor Michael Bloomberg pitched in. “We talk about Main Street, we talk about Wall Street, maybe we should talk about Henry Street,” he said, before introducing Tatiana von Furstenberg, the night’s honoree. “I’ve never met her before but I know her mother well. And she takes right after her: she’s glamorous, elegant and philanthropic.”

Von Furstenberg, for her part, kept things short and sweet. “I’m not a very good public speaker,” she admitted.