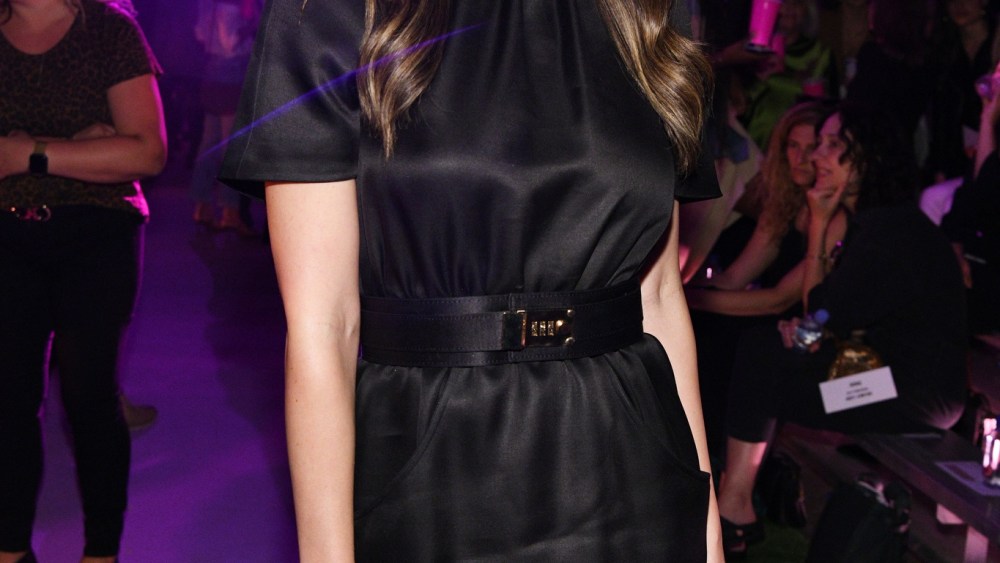 At 7:45 on Saturday night, Brandon Maxwell’s runway show, scheduled for 7 p.m., had yet to start. There were whispers of a model delay — someone walking in the show was late. Could it have been Bella Hadid or Irina Shayk, both of whom appeared on the runway? Whatever the case, guests such as Bretman Rock, Lily Aldridge, Rickey Thompson and Nicola Formichetti didn’t seem to mind the late start. (It’s possible the adjacent bar serving free cocktails in red cups and waiters circling with platters of cookies helped the situation.)

All eyes — and cameras — were on Thompson and Rock, who complimented each other on their respective looks with fervor.

“I’m giving you cold shoulder,” Rock said, showing off his pink Andriy Volkov shirt. “No, it’s not Brandon [Maxwell]. I wish it was. Miss Brandon, if you’re listening to this, hit me up.”

Asked whether he is a fan of the Brandon Maxwell brand, Rock replied, “B—h, duh, b—h. I just found out that [he] just recently won the CFDA award for Womenswear Designer. And this is [his] first show ever since winning that. So high expectations for you, Miss Brandon.”

Rock, who attended Christian Siriano’s show earlier that day, had since added rhinestone embellishment to his white-lined eyes. The inspiration behind his beauty look?

“Honestly, you know damn well the inspiration was ‘Euphoria,’” Rock said. “Miss Jules herself. People say I look like Zendaya, so I was just like, ‘You know what? Let me just give the “Euphoria” fantasy and give it all.’”

Aldridge is also making her own push into beauty, with the launch of her perfume Lily Aldridge Parfums, which released on Sept. 1. She said having a fragrance is something of a bucket list item for her career, and that she’s a beauty lover. Taking cues from other celebrities like Kylie Jenner and Rihanna, who have established wildly successful beauty brands themselves, Aldridge said she could see herself releasing a full beauty line.

“I would absolutely love to,” she said. “If somebody buys my perfume, maybe I can.”

Then, house staff started ushering stragglers off the runway. The show was finally about to start.