Dmitriy Tanner is one of the extremely few and proud: a top male model who is also an active-duty Marine. 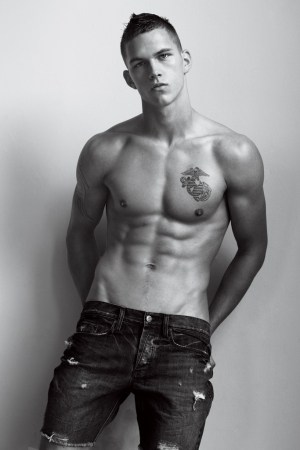 Dmitriy Tanner is one of the extremely few and proud: a top male model who is also an active-duty Marine.

Tanner, a 20-year-old lance corporal based at Fort Pendleton in Southern California, appears in the Calvin Klein Collection fall 2011 ad campaign and will feature in the Dsquared2 and Diesel spring 2012 campaigns. He got his start last January, walking the Givenchy show in Paris. That was followed by a spot opening the Calvin Klein show — a mere month after being discovered by a scout in a shopping mall.

“This kind of success is unique,” says Jason Kanner, founder of Soul Artist Management, which represents Tanner and a slew of other top faces, such as Simon Nessman, Arthur Sales and River Viiperi. “It usually takes a year for a model to pay his dues before anything takes off. Because of his active-duty schedule, he’s only working once a month. If he was in New York, he’d be working three to four days a week.”

Tanner’s story is pure Horatio Alger material. He was born in a small town outside of Moscow, to a single mother who left him and his older brother in the care of an orphanage. At the age of 12, Tanner, along with his brother, was adopted by an American couple and brought to Mechanicsville, Md. After graduating from high school, Tanner immediately enlisted with the Marines.

“When I was a kid, I didn’t have too much… When I came to the U.S., everything changed and my parents really gave me a great life. I wanted to pay my dues to my parents — and respect to the country — that gave me this life,” Tanner says of his decision to enlist.

While off duty in December 2010, Tanner was discovered by a model scout named Will Thomas, in a shopping mall. He was then signed by Soul Artist and immediately booked by Givenchy for its fall 2011 show.

“I had never done a runway show before. I didn’t really know that Givenchy was such a big brand in fashion,” says Tanner of that trip to Paris, his first ever to the City of Light. “I was really nervous. But everyone at Givenchy was really nice. And the food and catering were amazing. Definitely better than Marine food.”

At Fort Pendleton, Tanner sometimes has to wake for 5 a.m. shooting practice, whereas on modeling gigs the hardest part is putting up with hair and makeup. “When they had to bleach my hair and dye my eyebrows, it was a little weird,” he says.

Landing the Calvin Klein ad campaign, lensed by Mert Alas and Marcus Piggott, was “just a shock,” he says of the job that propelled him into the big leagues.

“Dmitriy’s confidence and strong, masculine appeal are perfect for Calvin Klein Collection. His build, posture and walk are elegant and manly,” says Italo Zucchelli, men’s creative director at the label.

As for his fellow Marines, they provide Tanner with plenty of ribbing about his side gig. “They joke that they have to roll out a red carpet for me,” says Tanner. “My higher-up officers are impressed and tell me this is great for me. But they tell me not to get affected by it and [let it] make me become a bad Marine. They don’t want it to go to my head.”