Tamron Hall, an Emmy and Season One Under Her Belt, Looks Ahead

The journalist, preparing for season two of her talk show, on how she plans to navigate the election, Black Lives Matter and the ongoing pandemic through daytime TV.

After landing her own talk show, some 30 years into her career as a journalist, Tamron Hall’s first season didn’t exactly go as expected. Some good surprises — she won a daytime Emmy in late July for Outstanding Informative Talk Show Host for the first season — and then there was the whole being shut down and having to pivot to shooting from home due to the coronavirus pandemic, a less welcome interruption.

The show is back for a second season, and Hall is more energized than ever to bring her audiences honest conversations about big topics.

“We just want to have this space where people can talk about the difficult things, and also the things that will bring a smile, surprisingly, to our faces,” Hall says. “We’ll give you a fast dance when it’s necessary, but we also know how to slow dance, and slow it down, and dig into storytelling. Because at the end of the day you have a story, I have a story, and it’s not always right there on the surface.”

She’s just gotten home from the studio, where the team is back at work ahead of kicking off season two on Monday, in time to spend a few hours with her young son, born in April 2019.

“I wanted to get in to see him because I only saw him for a few minutes this morning, and so we rushed from the studio,” she says, settled in and logged onto Zoom.

Hall sees being back in the studio as offering the American public a glimmer of hope, as so much of public life remains drastically different from how we knew things to be at the top of the year.

“I think we’re all relieved to be back in studio. Much like sports, getting back in the studio and having the show live again, it’s inching toward us trying to regain our lives,” Hall, who is 49, says. “‘There’s so much uncertainty, but there are bellwethers for people to feel confident that better days are ahead. So, if it’s watching an NBA game or our show being back online, these are the bellwethers that show you that, ‘OK, COVID-19: we’re not out of it yet, it’s not behind us, but we are inching forward to hopefully better days ahead.’”

Hall and her team began preparing for the second season immediately after they wrapped the first, which ended June 24 from home.

“We focused in on big conversations. We know from the response to our season in my home that people are ready to talk about things, talk about not only just COVID-19, but life. And we went after some big gets, some guests that were highly sought-after, and we have an incredible week, I think,” Hall says. 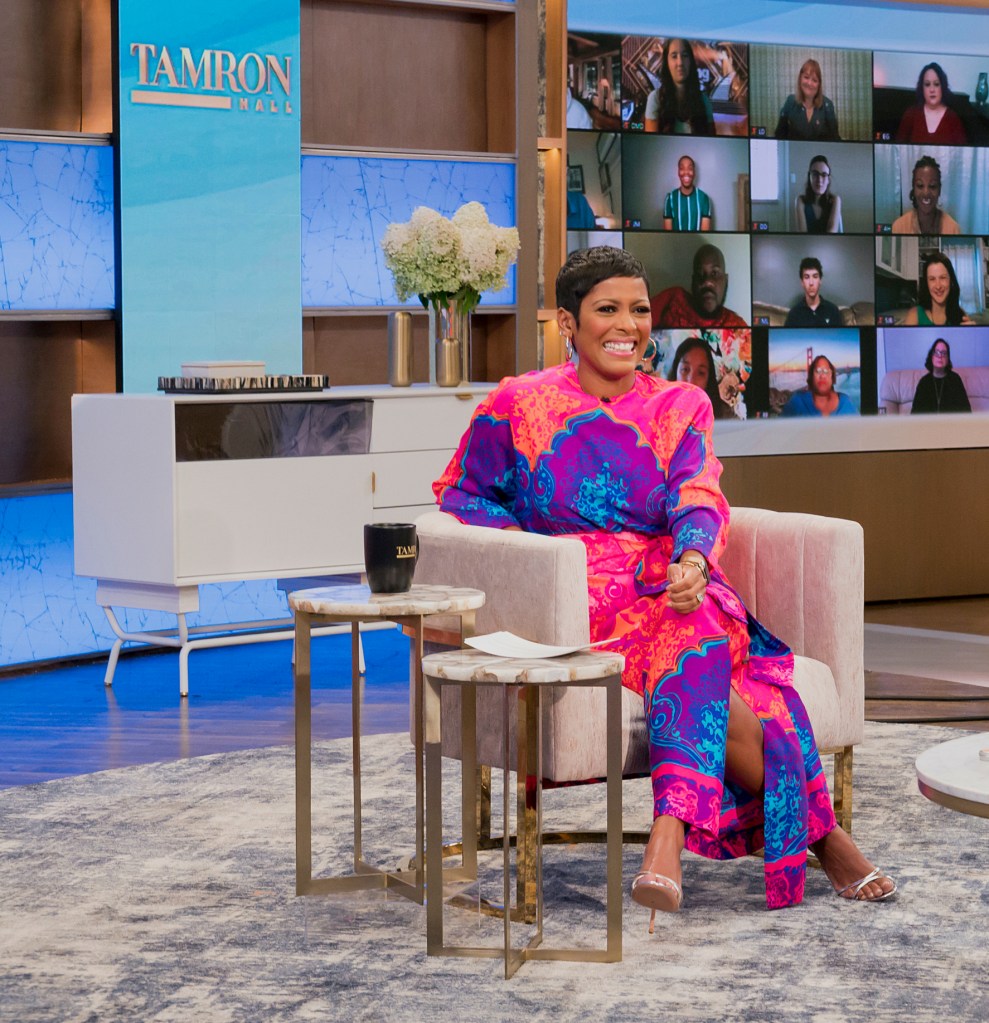 Her first week includes an exclusive sit-down with former Tallahassee mayor Andrew Gillum, his first interview since the scandal in March, when he was found inebriated in a hotel room in Miami Beach with suspected crystal meth present; Naomi Campbell, who recently turned 50 and launched a new book about her career; Chris Evans and Samuel L. Jackson, who will speak about their loss of their friend Chadwick Boseman, and Stassi Schroeder, who was fired from “Vanderpump Rules” after controversial statements related to race and the #MeToo movement surfaced.

“It’s a long week of big conversations that I think will further cement who we are as a daytime talk show, which is conversation,” Hall says.

It drives in on Hall’s consistent goal for her show since launching last September.

“I’ve always said, to be honest with you, that I don’t have a dream guest, I have a dream feeling,” Hall says. “We can see the end of the story and say, ‘Oh wow. This person turned into this huge, successful individual,’ but what did it take for them to get there?”

She points to upcoming guest Melissa Etheridge as an embodiment of such a conversation. Etheridge, whose 21-year-old son died of an opioid overdose earlier this year, will talk with Hall about her grief and how her pain can help other parents.

“Think about the number of kids who are spiraling into depression and drug abuse in this uncertain time. If you feel lonely before the pandemic, now you are feeling really alone, and you had your struggles prior to now. What do those demons sound like and feel like now?” Hall says. “I think she can offer other parents great perspective in the midst of the storms that may be brewing in their own homes. So it is a lot, but we laugh together, we cry together, we find inspiration, and that’s the show that it always was, that’s the show that I pitched, and it’s only gotten better.”

With that approach in mind, Hall says she intends to show the human side of politicians as she covers the upcoming election this fall.

“I think that the difference in our show versus really what I did on MSNBC or any other job that I’ve had as a journalist for 30 years, is that there are so many other people doing it. I think that cable news, for example, wasn’t around in the Oprah years and the Phil Donahue years. To be getting a steady diet of it all the time, based on a lot of strong personalities and strong opinions, how we would like to do it is really, who are these people?” Hall says. “Kamala Harris and her husband Doug are an interracial couple. We don’t talk a lot about that. There are bigger things to talk about. We’re in the middle of a pandemic, and I’d like to know when we’re going to get a vaccine. But the layers to their story is one that is fascinating given that I’m in an interracial relationship. And interracial marriage wasn’t legal in this country until nearly the late Sixties. These are textured conversations that we can have on our show that aren’t being had. Not because people are doing a bad job, but we all have our lanes, in some respect, but with a daytime audience, you can have multiple lanes, which include ‘Who are you?’ Because so much of the policy that is decided is based on who you are. Look at how many lawmakers have been against same-sex marriage until their child comes out. Policy often starts right under the roof of your home or how you were raised. Getting to know these layers of our politicians sometimes escapes the frenzy of how it’s covered today.”

Hall was born in Luling, Tex., to a single 19-year-old mother; her grandfather, born in 1901, was a sharecropper and could not read.

“I have seen the very difficult days of being a Black woman in this country, and that shapes my perspective,” she says of her upbringing.

“COVID-19, none of us saw coming. The one thing that is equal is none of us know what’s going to happen to us. But how we go through this, for me, is based upon my childhood and how I was raised, and hopefully having empathy and understanding and curiosity about others and looking for a communal way to get through it. That’s how it shaped me this summer,” she continues. “I’m going day by day, and hopefully our show will serve as a platform where people can have this real conversation, whether it’s COVID-19, Black Lives Matter, or just wanting a respite to try to put together an Adirondack chair” — something she did earlier this summer — “and knowing that that might be the biggest success you have in six months. That’s how I feel about it.”