The New York party circuit can get spicy at times…A spooky talk with an author of “The Halloween Handbook: Dress-Up for Grownups.” 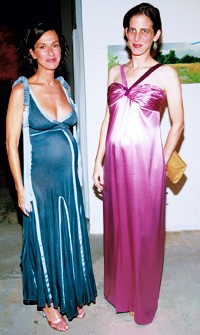 Aside from the fact that guests are paying more attention to being seen than what they’re seeing, one of the more absurd elements of the Society of Memorial Sloan-Kettering’s preview party for the International Fine Art and Antique Dealers Show is the finger food, which is the same season after season. Here are the tippy top of New York society strolling the aisles of the fanciest home furnishings in the world and they’re being fed pigs in a blanket and volcanically spicy salami, neither of which do wonders for the breath or the bum.

“I told a friend I was going to get food and she turned and looked at me in horror,” said one socialite, who added that she always carries Altoids with her anyway.

There last Thursday not eating the hors d’oeuvres were Joan Rivers, who was on her way out by 6:45 p.m.; Jamee Gregory; Mercedes Bass, and Coco Kopelman, the only co-chair who chose Chanel over Bill Blass, the evening’s sponsor, with Graff. “I like to say I’m the only non-Blass lass,” Kopelman chuckled.

Downtown, a trio of pregnant ladies — Jazz Johnson, Cynthia Rowley and Eliza Bolen — may have eaten their supper at the Night of Olana, underwritten by Oscar de la Renta, but they abstained from the vodka shots served with dinner. Others, including artists such as Hope Atherton and Rebecca Chamberlain, whose work, inspired by Olana, was up for auction, Amy Fine Collins, Allison Sarofim, Patrick Robinson and Beth Blake, were better equipped to indulge.

Though the party was celebrating a house in Rhinebeck, N.Y., Johnson asked the crowd to drink their Grey Goose the Soviet way: in unison.

The crowd participation continued. “Can I get a show of hands of those here who have not been to Olana?” asked Sara Griffen, Olana’s president. Most of the partygoers raised their hands.

Johnson is due in January, and Coralie Charriol greeted her with: “You look amazing, momma.” Still, the pregnant jewelry designer wasn’t convinced. She said de la Renta sent her a sample in a size 8. “They had a big one,” she explained. “But I barely squeezed into the top.”