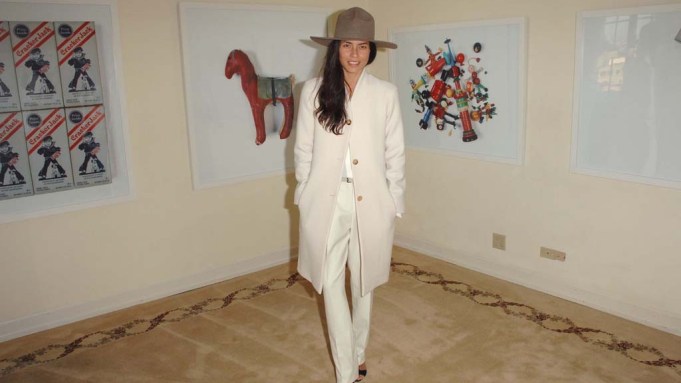 From Hawaii-raised surfer to downtown girl to toy collector, photographer Tasya van Ree is living up to the maxim that change is good.

The proof is her latest exhibition, titled “A State of Mind & the Affairs of its Games,” for which she filled 3-by-4-foot frames with images of trucks, Cracker Jack boxes, alarm clocks, clowns and other vivid reminders of youthful pastimes. Her favorite piece is a quintet of dolls arranged in descending size that she said doubled as a treatise on humanity.

“It’s a whole evolution of mankind,” she said. It also allowed her to turn people’s perception of her work on its head, if only somewhat. “Everyone expects black-and-white portraits of nude women from me,” she said. “It’s nude kewpie dolls instead — in color.”

At Thursday’s one-night-only showing at the Chateau Marmont in West Hollywood, van Ree embodied the show’s color palette — the lissome brunette traded her all-black wardrobe for a cream ensemble that layered a coat and blouse and a chestnut-colored hat by Gladys Tamez — one of the 50 toppers she’s collected over 15 years.

The fashion and art crowd — André Saraiva, Langley Fox, Brian Bowen Smith, Mattia Biagi and Valerj Pobega — took in van Ree’s 21 digital photographs over an old-timey jazz soundtrack the photographer selected herself. Nina Clemente, Francesco’s daughter, took a tour while carrying her one-year-old daughter, Indigo, whose floral dress mirrored the palette in the photos. “She’s excited by all the color,” Clemente said of the toddler.

Van Ree will have yet another opportunity to talk about her work in a documentary about her by Mark Cancelliere. The only thing that viewers won’t see is her personal life, which was tracked in the tabloids when she dated actress Amber Heard, who’s now engaged to Johnny Depp.

“In this context, it’s not a reality TV show,” van Ree said. “It’s hard to separate the two and keep it based on the creativity and inspiration. You start judging the person on their life and it’s not about that. It’s the art.”