Taylor Schilling and costar Judith Godrèche were at the Smyth downtown to promote “The Overnight,” showing at the TriBeCa Film Festival. 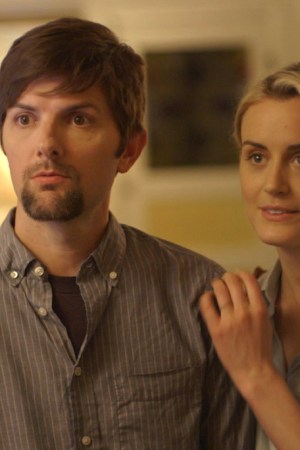 “Girl…I’ve been taped in securely. It’s a whole situation,” Taylor Schilling is talking about her boobs, which anyone who’s a fan of “Orange Is the New Black” has already seen many times over.

The actress is at the Smyth downtown in a hotel room that has been cleared of its contents and staged with directors’ chairs and a TriBeCa Film Festival-branded step and repeat. Schilling is there along with her costar Judith Godrèche to promote “The Overnight,” showing at the festival. The film first made its rounds in January at Sundance, where it sparked a minor bidding war among six buyers including Netflix and Lionsgate (The Orchard ended up paying $4 million for it.)

In the film, Adam Scott and Schilling play Alex and Emily, a couple hoping to recruit new friends having just relocated to east Los Angeles from Seattle. They meet Kurt — a suave and self-assured hipster played expertly by Jason Schwartzman — when their sons share a bag of gummy worms at a local playground. After a few minutes of chit-chat, Kurt invites the couple over for pizza later that night, a nighttime playdate for the boys and a get-to-know-you meal for the grown-ups (consummately L.A., the pizza isn’t ordered in, but rather prepared in the host’s wood-burning oven).

Alex and Emily arrive at the gated manse of Kurt and his wife, Charlotte [Godrèche], cheap wine in hand. The pizza had and the wine guzzled, Alex and Emily get ready to head home when Kurt suggests they put the kids to bed upstairs and keep the good times rolling. After the boys are tucked in, the booze-fueled mirth continues, as the couples polish off a few more bottles and take hits off Kurt’s glass bong. From there, the topics of marriage and sex ultimately come up and take the night in an unexpected trajectory.

Alex and Emily are a couple with which most audience members will have at least some degree of familiarity — 30-ish, together-since-college, etc. They embody a specific phase of life: where one knows, cognitively, they’re an adult but the house, the kids, the responsibility still haven’t quite sunken in. Suffice it to say, they’re up for some spontaneity.

We infer that while Alex and Emily have been together forever and, therefore, have had a relatively limited number of sexual experiences, Kurt and Charlotte have been in some racier situations. But the flirtation is so nuanced and ethereal, it makes the viewer question if it’s all in their head. Midway through the film, the audience has a moment of, “Wait, wait, wait…are they swingers?” As the film progresses, a will-they-or-won’t-they tension crescendos, prompting an expected dose of jealousies, miscommunication and complications.

But the label “sex comedy” is all too limiting for “The Overnight.” Yes, it’s funny and, yes, it deals with sex quite a lot. But whereas the term “sex comedy” conjures up the raunchy movies of yore what with pimply faced actors and ejaculate-related jokes, “The Overnight” is very adult and sophisticated. It never skews broad, this despite the fact that one of the major plotlines involves penis size. The film was directed by Patrick Brice, who handles some of the more bizarre scenarios (who skinny dips after a dinner party with a couple they just met?) with such a sense of naturalism that the audience is never taken out of the immersion.

Shockingly, this is only Brice’s second feature film. “Well…yeah!” Schilling laughs when asked if there was any hesitation about working with a director who barely has an IMDB page. “Well, I was a little bit uneasy about the project just because the material, reading it on the page, it could go a totally different way,” Schilling says. “But I met with Patrick and he had such a clear vision. He was like, ‘we’re going to take the raunch and wildness of the situation and see it through this real and authentic and kind lens, where you’re really rooting for these characters.”

Brice also wrote the script, and the dialogue — with touches of Mumblecore and improvisation — is reminiscent of the Duplass brothers’ brand of offbeat, imperfect realism (they were executive producers on the film). “He was discovered by Mark Duplass. He’s going to be huge,” Godrèche says of Brice. “Watch, five years from now people will beg to work with him.”

The movie is ultimately exploring intimacy, with each character asking themselves the same question: what does it mean to be a couple? Schilling plays something of a straight man, trying to negotiate — not only with her husband but also with herself — how far to take the night, her impulses and common sense at odds. Judith, all breathy and French and feline, is tough to read and deliberately so. Her energy and, yes, her provenance, lend itself to the fuzzy, sexual dynamism of the film. Is she flirting or just French? Is it normal in France to hold hands with another woman’s husband?

Schwartzman is kinetic and captivating as Kurt, who despite having nauseatingly hipster, somewhat superficial interests (he brags early on about building a water system in his house), is tender and generous. Scott as Alex, Schilling’s soft, sensitive husband, is consumed by his insecurities and shortcomings. “Each person has a really clear thing about themselves that they’re trying to come to terms with and accept,” Schilling says. “They all happen to have to do with sex, but it’s not really about the sex. There’s a real honesty to it that grounds all the, you know, penises.”