Parties at film festival heat up over weekend. 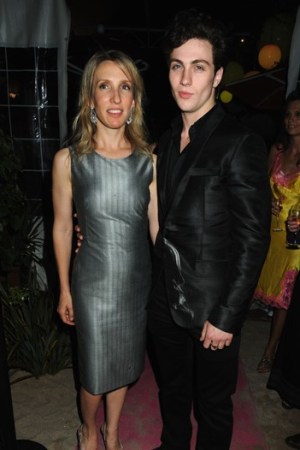 Dressed in an edgy Alexander McQueen suit, the British actor brimmed with star quality at a bash feting the completion of Taylor-Wood’s first feature film Sunday night in which he plays the role of the young John Lennon.

As the likes of Harvey Weinstein, Georgina Chapman, Diane Kruger and Ralph Fiennes flowed into the event — hosted by Quintessentially at the Vitaminwater beach — Johnson said he hoped he’d managed to capture the essence and spirit of the late Beatle. “I tried not to think about how big the role is,” he said.

Perched on a wooden stump to avoid getting sand in her heels, Taylor-Wood disclosed that “Atonement” director Joe Wright had placed the film’s script in her lap after “stealing it from a desk. He was determined this was the film for me to direct and I had an immediate affinity with the story; the whole thing felt serendipitous,” she said. “I remember getting into my car, turning on the engine and hearing Lennon’s ‘Starting Over’ blaring over the radio — completely by chance.”

News of a performance by Deborah Harry Friday night at the Belvedere Vodka party drew hoards of festival hipsters to the Le Baron club, including Delfina Delettrez Fendi, Robin Wright Penn and Colette’s Sarah Lerfel. Many more clamored to get in.

“Is it hot enough? No, it could get a little hotter, right?” purred Harry, who took to the stage at 2 a.m. “This one’s called ‘French Kissing in the USA.’ Anyone from Paris?” continued Harry, before going on to croon over a tinny PA system, karaoke style.

Meanwhile a manic Rosanna Arquette dashed about the room dragging ladies in front of a rolling camera to pose with hip hop singer Postman. “Out of the way, I’m working; I’m filming a music video,” she yelled.

On Saturday night, hundreds of revelers headed to Soho House at the Château de la Napoule for the Art of Elysium hosted by Cartier, Relativity Media and Grey Goose. The likes of Quentin Tarantino, Paula Patton and Kevin Pollack mingled under trees hung with lanterns.

“For me Cannes, is the film Olympics,” declared Tarantino, turning bashful when asked if the spelling of his latest flick,  “Inglourious Basterds,” which premieres here Wednesday, is down to typos. “Aww, don’t ask me to explain that. It’s just about taking the (mickey),” he demurred.

Down at the old port, Mariah Carey, who plays a dowdy Harlem social worker in the film “Precious” which premiered Friday, channeled her glamorous diva side, partying late into the night on the Cavalli boat. Host Eva Cavalli had scattered jewelry and orchids across the dining table and served fish under the stars. “I like to use personal things (as decoration), ” she said.

Diehard soccer fan Roberto Cavalli was missing in action due to an important match in Florence Sunday morning. But the designer surfaced the next night for a party in Chopard’s suite on the top floor of the hotel Martinez, attended by Eva Herzigova.

Asked if she had been aboard the Cavalli boat, Peaches Geldof, who wore flowers in her hair, whispered: “The thing is, I’ve already been invited on the Dolce & Gabbana boat and I don’t want to start boat wars. Having said that, I’ll probably end up in a dingy!” she giggled as a merry Cavalli boogied to a live band, quaffing Champagne. So who won the match? “Firenze!” yelled the designer, punching the air in victory.