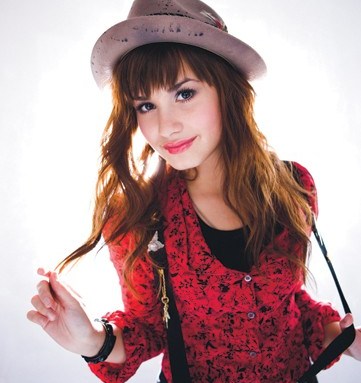 A new crop of teen starlets is following in the footsteps of Hilary Duff and Miley Cyrus, aiming to use their tween appeal in movies, pop albums and television shows (often via the Disney Channel) to boost them into mainstream stardom. The teenybopper tunes may not appeal to those old enough to vote just yet — “There is a party on down the street but nobody invited me and I got a gig babysitting my uncle’s kids,” squeak the Clique Girlz in a peppy ditty called “Then I Woke Up.” But, as future fashion and marketing icons go, these are the ones to watch.

Demi Lovato, 16
Hometown: Dallas
The Scoop: After singing her way to fame in the Disney TV movie “Camp Rock” with the Jonas Brothers, she will drop her debut album this fall. Next year, she not only will morph into a  princess hiding from kidnappers in the TV movie “Princess Protection Program” co-starring best friend Selena Gomez, but she also will head her own TV series, “Welcome to Mollywood,” about a teen named Molly who wins a talent search. The budding rock chick often pairs billowing tops with skinny jeans tucked into boots.

Ali Lohan, 14
Hometown: New York
The Scoop: It’s common to do a double take with blue-eyed Lohan because of similarities to her big sister, Lindsay. The younger Lohan received her share of attention on mom-ager Dina’s reality TV show, “Living Lohan.” Her first R&B single, “All the Way Around,” climbed  up to iTunes’ Top 100 list following its July 14 release.

Miranda Cosgrove, 15
Hometown: Los Angeles
The Scoop: The star of the TV series “iCarly” on Nickelodeon, Cosgrove fi rst caught moviegoers’ attention by appearing with Jack Black in the comedy “School of Rock.” In addition to singing four tunes on the “iCarly” soundtrack, released in June, she’s also working on her first solo album. A true rocker, Cosgrove confesses on MySpace.com, “My favorite color is purple because it rocks.”

Aly & AJ: Aly Michalka, 19, and Amanda “AJ” Michalka, 17
Hometown: Torrance, Calif.
The Scoop: These California girls followed up their 2005 platinum-selling debut album “Into the Rush” with July’s “Insomniatic.” Sanrio, the maker of Hello Kitty, will sponsor their headlining tour. The sisters also plan to unleash a barrage of licensed products, ranging from clothes by FEA Merchandising and backpacks by Accessory Network to jewelry and hair accessories by IMT and cosmetics by Townley Girl.

Selena Gomez, 16
Hometown: Grand Prairie, Tex.
The Scoop: Best known for portraying a sassy sorceress in Disney’s “Wizards of Waverly Place,” Gomez will transform into a princess donning colorful dresses in “Another Cinderella Story,” which will be released on DVD this month. She’s also forming a band to record an album that will be released on Hollywood Records. Gomez favors ladylike looks from BCBG, Michael Kors, Forever 21 and Urban Outfitters. “I’ll take [a band T-shirt] and wear it with a high-waisted skirt,” Gomez says. “My mom is like, ‘You’re becoming an old woman, Selena.’”

Tiffany Giardina, 14
Hometown: Waccabuc, N.Y.
The Scoop: Resembling a young Kristin Davis, Giardina will launch her fi rst album, “No Average Angel,” next February via 785 Records. Prior to that, she’ll get plenty of radio airplay for two songs that she sang on the soundtrack for “Another Cinderella Story,” starring Selena Gomez. Though she can still fit into a children’s size 12, Giardina likes fashion and beauty brands ranging from Catherine Malandrino, Juicy Couture and Kitson to MAC  Cosmetics, Tiffany & Co. and Burberry.

Jordan Pruitt, 17
Hometown: Loganville, Ga.
The Scoop: The rising high school senior just signed the first artist — 10-year-old
pop-country singer Jessie Kirk — to her new music production company, Jordan Pruitt Enterprises. Aiming to appeal to an older audience, Pruitt added R&B and Forties-era jazz to  the pop repertoire in her second album, “Permission to Fly,” which Hollywood Records will release worldwide on Tuesday. A spokeswoman for Limited Too, she also soon plans to introduce her own branded merchandise at the tween retail chain. Pruitt loves J Brand jeans as well as girly frocks from Alice + Olivia and Rebecca Taylor. She is also a fan of headbands, saying, “When your hair is wet, you can just put one on and you’re ready to go.”

Taylor Swift, 18
Hometown: Reading, Pa.
The Scoop: Evoking the glamorous country singer Faith Hill, Swift cuts a striking figure with her blue eyes, blonde curls and statuesque height of 5 feet, 11 inches. The recent high  school graduate is also mega-successful, having sold more than three million copies of her namesake debut album. As a spokeswoman for L.E.I., Swift is designing sundresses that will be sold at Wal-Mart. As Swift tells her MySpace.com fans, “My ideal outfit is a sundress and  cowboy boots.”