Tenille Townes has an old soul.

Although the rising country music artist is only 26 years old, the depth of emotion she reveals in her songwriting would suggest someone who has lived a much longer life.

Take “Jersey on the Wall (I’m Just Asking)” for example. At first glance, the song sounds like a typical ode to a star high school athlete whose jersey is hanging on the wall in a gym. But the chorus goes much deeper, asking questions of God such as how a snowflake is made, how the Earth keeps spinning and how a car couldn’t be stopped from crashing — and killing that star athlete.

Her first hit, “Somebody’s Daughter,” is about a homeless woman Townes sees on the side of the road who prompts her to speculate about the woman’s history: “Bet she was somebody’s best friend laughing back when she was somebody’s sister,” she sings. “Now this light’ll turn green and I’ll hand her a couple dollars and wonder if she got lost or they forgot her. She’s somebody’s daughter.”

Townes also takes on other deep issues in “When I Meet My Maker,” that explores what eternity will look like.

All of these songs are cuts on her first full-length album that dropped on June 26. Called “The Lemonade Stand,” the 12-piece project is the culmination of nine years of work since the 17-year-old from Alberta, Canada, and her father jumped in her Tacoma truck and made the 45-hour drive to Nashville to chase her dream of being a singer-songwriter in country music. 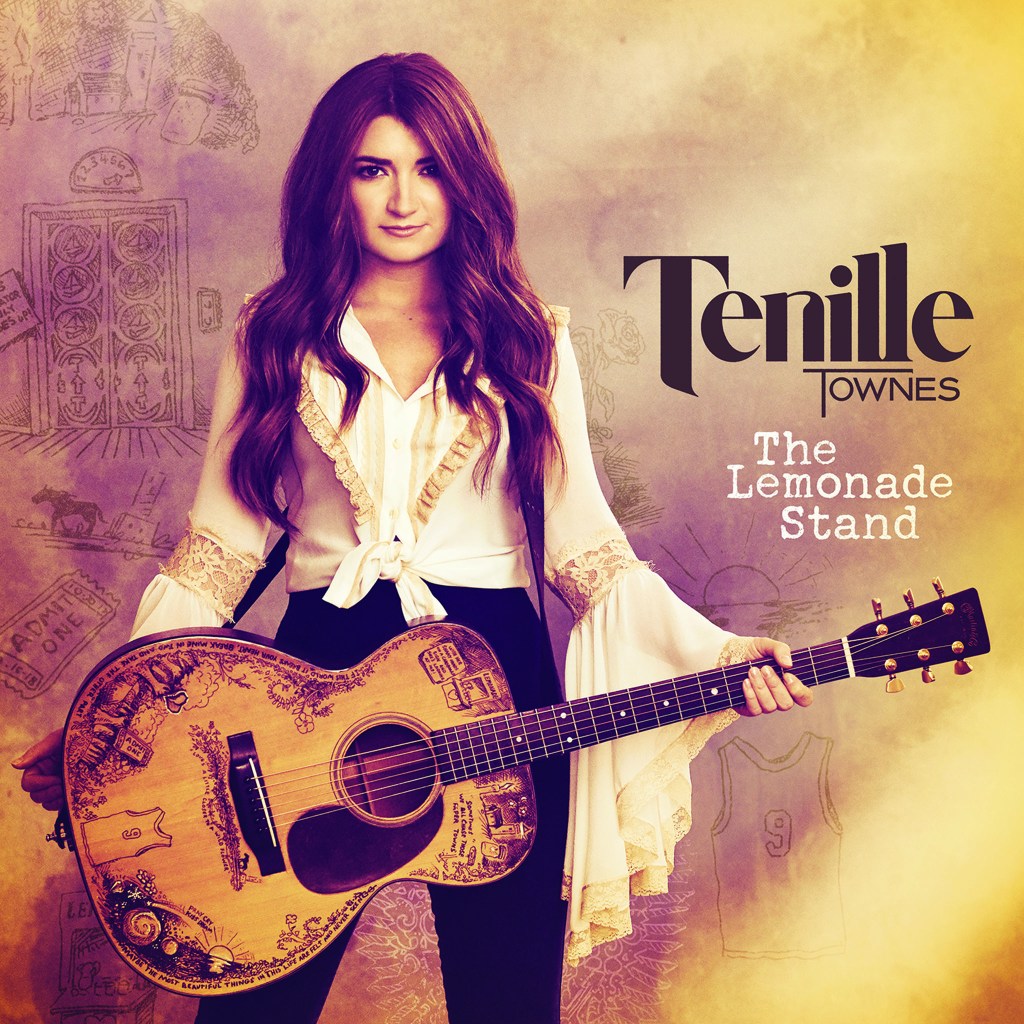 The album cover of Tenille Townes’ album, “The Lemonade Stand.”

“My favorite place to write is as the observer who has a bird’s-eye view of a story or a situation,” Townes tells WWD in a Zoom interview from her Nashville home. “It helps me process how I feel about something and how I emotionally belong by stepping back and writing about it. To me, music is a place to talk about things that are hard or are questions. Seeing a homeless girl on the side of the road makes me feel something. So I think, ‘how do I channel that feeling?’ Music is my safe place to do that.”

Townes, who is signed to Columbia Nashville, cowrote all the cuts on the album and the music clearly comes from the heart, providing what she describes as “emotional moments that are anchors for me.”

“Jersey on the Wall,” for example, “was inspired by people I met. I really did see that girl’s jersey hanging on a wall and had this moment of thinking about the questions I have for God.

“And ‘When I Meet My Maker’ is another sacred moment,” she continues. “That song was written thinking about my great-grandma who I was blessed to know for 20 years of my life. She was so incredible, such a strong-hearted woman, so loving — like a human teddy bear. We really miss her a lot so this song brought me peace thinking about where she is now. The day we recorded that song, I wore her earrings to the studio and I really felt her with me. It was a very raw and vulnerable moment for me and I’m grateful for how we captured it.”

Townes and her producer, Jay Joyce, spent eight weeks prior to the pandemic recording the album in a former church in East Nashville. While the way the album turned out exceeded her expectations, the pandemic brought the marketing plans to a screeching halt. But Townes — who is nominated for two awards at the Academy of Country Music Awards, set for Sept. 30 — has made her peace with that.

“The way I feel definitely depends on the hour of the day, but I’m just grateful. This is a project I’ve been dreaming of my whole life. It’s been such a wonderful ride the last few years leading up to this moment, feeling these songs come to life and then having the space to be able to take them on the road and introduce this music a little at a time to people. It feels like there’s a community out there for them.”

So while she’s unable to tour to support the album launch, the pandemic “has given me a lot of space and time to appreciate it and do journaling about it and soak it in in a different way than I would have otherwise — and I’m really grateful for feeling that community now.” 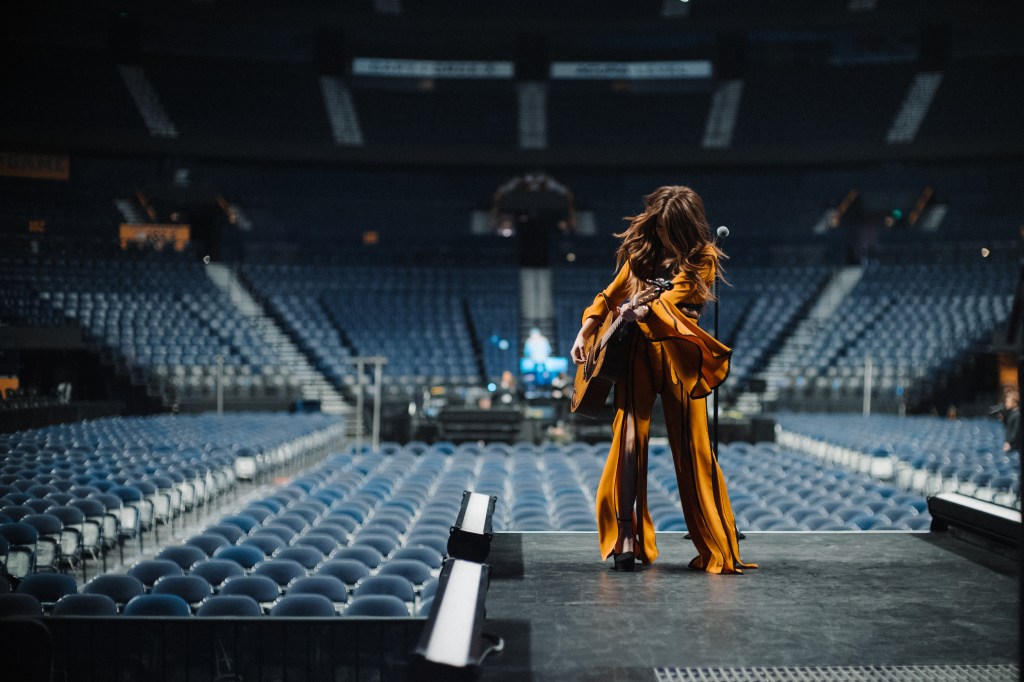 Tenille Townes has a propensity for bell-bottoms and flowing sleeves.

She’s also pivoted from performing in front of an audience to performing virtual sets. She admits it’s “strange playing to a screen,” but it has brought her to the realization that there’s nothing like singing in front of a crowd. The pandemic has also given her time to work on new music for upcoming projects.

“It took me a bit to find my creative place,” she admits. “I was feeling so overwhelmed in this time, I was lost for a bit and then writing has definitely helped me find my way and again has been that safe place for me to let out how I feel. I’ve been writing on Zoom with people I’ve never met before. I have some friends in L.A. who I’ve written a lot of songs with over the past two months and a couple of friends in the U.K. who I don’t know I would have had the opportunity to write with if it hadn’t been for this. So it’s been exciting in a way to work on new songs and be dreaming about the next steps after this album.”

In the 10 years since she started the fund-raiser, it has raised more than $1.9 million for Sunrise House, a local youth shelter in Townes’ hometown of Grande Prairie. Proceeds from this year’s event also benefited the Girl Scouts of Middle Tennessee’s Troop 6000, which supports girls without permanent housing.

“I heard about the Sunrise House when I was 15, and was shocked to hear about kids’ my age, in my own hometown, who needed a safe place to sleep at night. It made me want to do something, and the only way I know how to bring people together is through music,” Townes says. “It’s been incredible watching my community come together every year to wrap their arms around the kids turning to this shelter, to ensure they continue to receive the love and guidance they need to take the next steps forward toward the rest of their stories.” 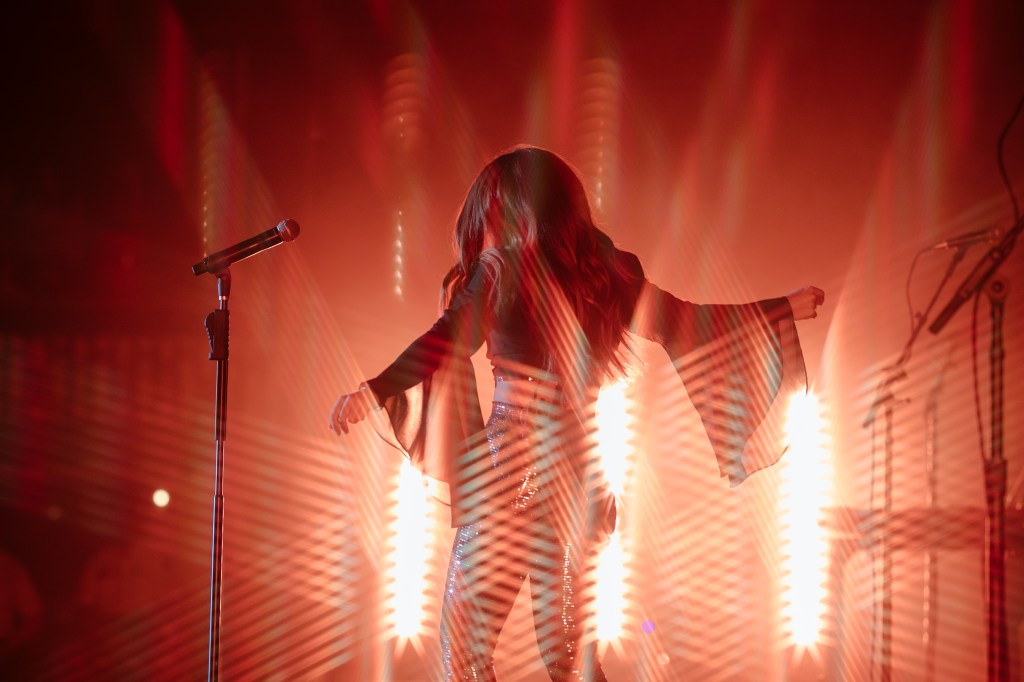 Tenille Townes is hoping to start touring again this fall.

While virtual performances have their advantages, Townes is still eager to head back out on the road. “Crossing fingers, we have some acoustic headlining dates on the books for this fall, but truly, it depends on what I’m told on a weekly basis if that’s something I’m going to be able to do. I’m dying to be on the road right now but whenever that is, it’ll be sacred and awesome.”

When she does get back out on the road, Townes will also be able to showcase her style.

“I love to wear things that make me feel confident and brave,” she says. “Stepping on stage is kind of like putting on armor in a way. I love a Seventies’ throwback vibe, I love wearing my bell-bottom pants and holding my guitar and being anchored in what feels like roots to me. And then I love the Stevie Nicks vibe — sleeves that have a dramatic movement on stage that can be an extension of the music. I love anything that sparkles and anything with fringe.”