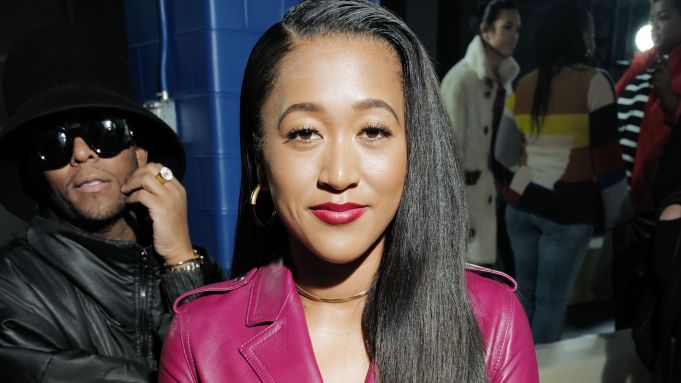 Tennis player Naomi Osaka has been taking in her first New York Fashion Week, but she hasn’t just been a spectator. In addition to sitting front row at Coach on Tuesday, she also debuted designs of her own, in collaboration with Adeam designer Hanako Maeda.

“I’ve always loved Coach and I heard that they always put on really good shows, so I wanted to come here and see what the vibe was,” Osaka said ahead of the show.

Although she’s known for her rising profile in the tennis world, Osaka has found a creative outlet through sketching her own fashion design ideas.

“I’ve always been interested in fashion,” she said. “As an athlete you don’t really get to wear casual clothes or what you want to wear that often. You always have to wear athletic gear, so for me I’ve always drawn what I want to wear, or what I thought would look good on other people.

“Designing things is super fun,” she added. “I don’t know how to make my designs, but I do love drawing them.”

On Monday, Osaka got to see some of those ideas in action.

“It was very fun, but I was nervous, especially when my designs came down the runway,” she said of sitting front row the day before. “I was like uh, do they like it, do they not? So today I’m more enjoying as a spectator.”

After fashion week, Osaka will head back to Los Angeles to continue training for her next tournament, the Indian Wells Masters in California.

“I’m honestly taking it by the hour,” she said of her plans for the rest of fashion week. “I really don’t know what’s going on and it’s kind of a hectic whirlwind. It’s really fun, though.”

“I’m so excited for the show. It’s the first time for me being here, so it’s such an honor,” said Palitchoke, who’s in town until heading to L.A. this weekend to film a show. “I love [Coach] so much, I love fashion, so I’m happy to be here.”

Nearby, Larsen Thompson was posing for photos. “What’s up! So good to see you,” said Thompson, greeting Quincy Brown and pulling him in for the shot.

Right before the show started, Coach campaign star Michael B. Jordan came out to take his seat in the front row. (Sadly, Coach’s other campaign star — J.Lo — didn’t attend.)

The show had an extra surprise VIP emerge ahead of the finale: Debbie Harry, wearing a coat from Coach’s collaboration with the Estate of Jean-Michel Basquiat, walked down the runway and joined the live band for a song. After the last model walked by, the drummer finished with a final flourish: she tossed both of her drumsticks into the air behind her before the band traded high-fives.

The effect seemed to leave a mark. As one suited guest remarked afterward, making his way out of the show space, “it’s taking me right back to my youth.”