Conran, who believed in the power of design to make people's lives better, died at home in London a few weeks shy of his 89th birthday.

Image Courtesy of the Design Museum in London

LONDON — Sir Terence Conran, the designer, retailer, restaurateur and lifestyle pioneer who changed the way post-war Britons furnished their homes, has died at 88, according to the London Design Museum, which Conran founded in 1989.

Conran, who believed in design as a life enhancer, died Sept. 12 — a few weeks shy of his 89th birthday — at home in west London, following a career that began in the late Forties and spanned more than half a century.

“He was a visionary who enjoyed an extraordinary life and career that revolutionized the way we live in Britain. He promoted the best of British design, culture and the arts around the world and at the heart of everything he did was a very simple belief that good design improves the quality of people’s lives,” Conran’s family said in a statement.

The family added that Conran remained a “relentless champion” of the importance of education to young people in the creative industries, and was an “adored” father, husband and friend. 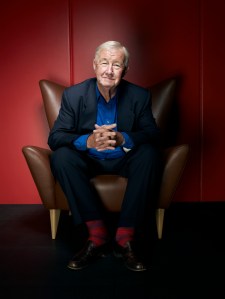 Born on Oct. 4, 1931, Conran studied textile design at London’s Central School of Art. He left school in 1948 and set up a workshop with his tutor, the artist and print-maker Eduardo Paolozzi where he concentrated his skills on furniture design, ceramics and fabrics. In the early Fifties, he worked on the Festival of Britain alongside the architect Dennis Lennon.

He founded the furniture company Habitat in 1964, which became an international chain, and set an early template for the modern interiors — and lifestyle — store, inspiring the likes of Ikea, Crate & Barrel, Pottery Barn and Restoration Hardware. His style was unfussy, minimal, modern and functional done in earth tones such as mustard, sage, cobalt and teal.

He would later build restaurants into his shops, and the latter became famous in their own right, such as Bibendum in South Kensington, Bluebird in Chelsea and Le Pont de la Tour in southeast London.

He opened his first restaurant, The Soup Kitchen, in 1953 and his interests extended to Paris, New York, Copenhagen and Tokyo. Last year, he opened his 52nd restaurant, Wilder, in the basement of the Boundary Hotel in London. It focuses on seasonal, local foods.

Habitat led him to found the Storehouse Group, which acquired the Heal’s furniture business; set up the high street fast-fashion and interiors chain Next, and ran the retailers British Home Stores and Mothercare. He opened the first Conran Shop in 1972, selling furniture and design items. But while Storehouse was successful for a time, its sprawling interests proved too much for Conran to manage and he lost control of the group in 1990. Storehouse eventually was dismantled as its various operations were sold or spun off into separate entities, including The Conran Shop. Habitat, the foundation of Conran’s impact, also lost its cache in the Nineties as rivals sprouted, and its stores eventually – and ironically – were acquired by Ikea.

“He still wants to design. He doesn’t care about the money, he wants to continue designing and creating beautiful things. It’s part of Conran’s DNA. He cares that the business is sustainable long-term, and this is the commitment we gave him,” Marandi told WWD in an interview earlier this year.

On Saturday Marandi said: “We will miss him greatly. It has been an honor and a pleasure to work with him, and I am so grateful to him that he stayed involved until the end. It continues to be a unique privilege to propagate Sir Terence’s incredible contribution and we will do everything in our power to ensure his work and guiding principles endure for generations to come. Our thoughts and deepest condolences are with his family at this difficult time.”
Hugh Wahla, chief executive officer of The Conran Shop, said the retailer “will proudly continue his legacy, whilst missing his wonderful insight, unique talent, transformative leadership and flamboyant personality.”

Conran also founded The Conran Design Group, which specialized in designing hotel and restaurant interiors, graphics, products and homeware. He would also go on to establish an architectural practice with Fred Lloyd Roche called Conran Roche. It eventually became Conran and Partners.

He founded the Design Museum in Shad Thames, southeast London, in 1989 and it hosted more than 100 shows, including the blockbuster “Hello, My Name is Paul Smith,” and “Women Fashion Power,” and has showcased the works of Paul Smith, Zaha Hadid and Frank Gehry.

In 2016, the Design Museum relocated to Kensington, to a modernist building — the former Commonwealth Institute in Holland Park — which was redesigned by John Pawson. It is triple the size of the old space on the Thames and filled with a variety of 20th-century objects including a Burberry trenchcoat, Christian Louboutin Pigalle heels and punk creations by Vivienne Westwood.

The Design Museum has always taken fashion to heart, hosting the The Loewe Craft Prize, and staging “Azzedine Alaïa: The Couturier,” the first display of the late designer’s work in London.

The Design Museum said Saturday it will celebrate Conran’s life, career and contribution to the museum with a commemorative display and memory book for the public to sign.

Deyan Sudjic, director emeritus of the Design Museum, said Saturday that “no one has done more to create modern Britain than Terence Conran. He spent his whole career looking for ways to make life better for everyone.”

Conran won a medal for Arts Philanthropy in 2012, while in 2017 Queen Elizabeth awarded him the Order of the Companions of Honour for his contribution to the arts. He was the subject of a monographic exhibition “The Way We Live Now” at the Design Museum in 2011 to coincide with his 80th birthday.

Last year, Conran was the subject of a show at London’s Fashion and Textile Museum along with Mary Quant, who was a close collaborator and friend. Called “Swinging London: A Lifestyle Revolution,” the show featured their work displayed together in lifestyle settings such as a living room and a shop.

Also in the exhibition was Conran’s Cone Chair from the Fifties, a host of commercially produced furniture made for open-plan living and an innovative open-shelf display from the first Habitat shop on Fulham Road from 1960.

Dennis Nothdruft, head of exhibitions at the museum and curator of this exhibition, said the show was meant to mark the achievements of Quant, Conran and many others who, through commercial success, brought clothes, furniture — and a modern lifestyle — into people’s lives in post-war Britain.

Conran always seemed to have a twinkle in his eye and a wry smile, as if he were sharing a private joke. At times temperamental and demanding, he also was the epitome of the bon vivant, sitting in his restaurants smoking a cigar, his pale face flushed after a fine lunch or dinner – either from too much sun while on holiday or, more likely, an enjoyment of claret. He rarely suffered fools gladly, and could be scathing in talking about poor design in everything from buildings and furniture to fashion, or bad food. But he also was intensely curious about those subjects, as well as fashion and retailing.

In 2007, when WWD asked him about any unmet challenges, Conran was blunt.

“I’m quite eager to see what dying is like — the final exit,” he said. “I’m 76 years old next week. When you have a back as bad as mine, you have to think, ‘It can’t be that long now.’ It makes you think of so many things that you want to achieve. I’m not in any way in a despondent state. I want to cram in as much as I can before the inevitable happens. I’ve got a very interesting solution to the final goodbye to my friends. It’s to give a great party in all my restaurants along the Thames and to have the most fantastic fireworks display with my ashes going up inside the biggest, noisiest fireworks.”

Conran is survived by his five children and his fourth wife, Vicki. His son, Jasper Conran, is a fashion and homeware designer based in London.