Terror Jr. gained fame with their identities concealed. Who knew revealing themselves would be the most rewarding part of it all?

The last thing Terror Jr. expected to do as a pop band was meet-and-greets. For their first year and a half making music as a duo, David Singer-Vine and Lisa Vitale hid their identities — covering their faces with their hands in photographs, not doing interviews; for a long while, there was a theory circling the Internet that this enigmatic group had Kylie Jenner as its lead singer, after their song “Three Strikes” was featured in her “Glosses” video commercial. While Jenner’s involvement was debunked, it did serve to raise the duo’s profile. From 2015 to 2018, they released three separate LP-length projects, each called “Bop City,” a mysterious, made-up place with an album cover that revealed little else than the color purple and clusters of grapes.

But here they are, on a recent Thursday, performing at the Warsaw concert venue in Brooklyn’s Greenpoint neighborhood as part of their headlining tour — and they’ve got a meet-and-greet planned. They’ve just released their first full-length album, “Unfortunately,” and have adopted a newfound approach to being Terror Jr. They’re stepping into the light, making themselves known and shaking hands with the fans who stayed with them through all the riddles, secrets and dead-end clues to who they really were posted on social media for three years. 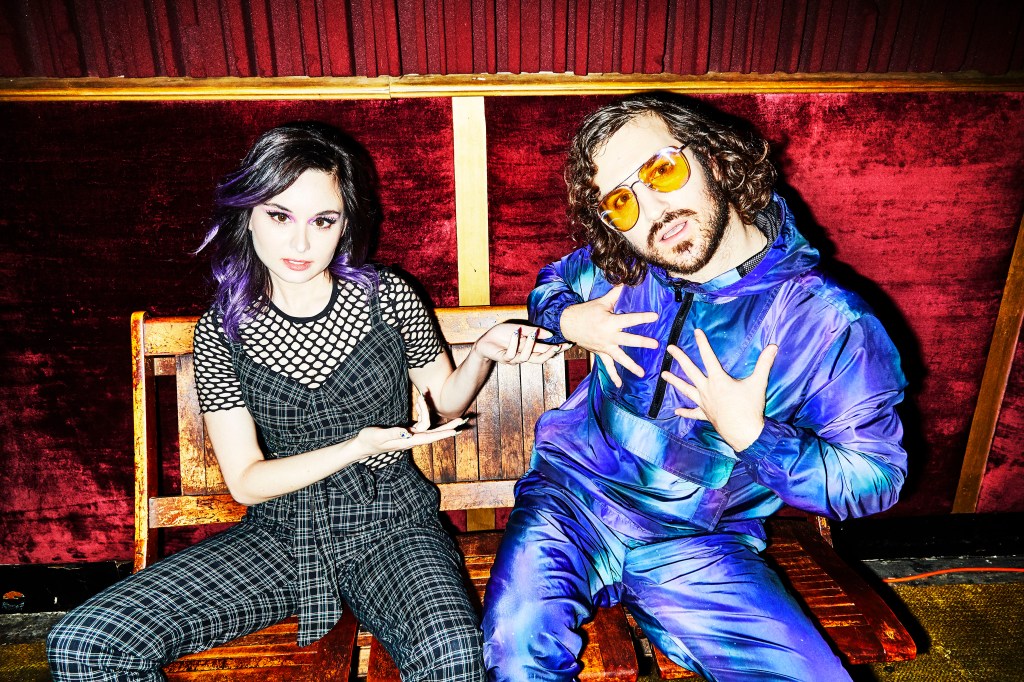 “For the first tour that we did in 2017, I wore a cape,” Vitale explains from their green room at the venue. “It was kind of protection for me, because I was not sure how people would respond to seeing me when we had kept that so separate from the group. Even on that tour, we kept everything very moody, you couldn’t fully see my face, it was still very mysterious. We were trying to keep people guessing.

“On this tour, the nerves of wondering how people would react to finding out who I was have dissipated because the fans that are around now support us as we are, with both of our faces out there.” 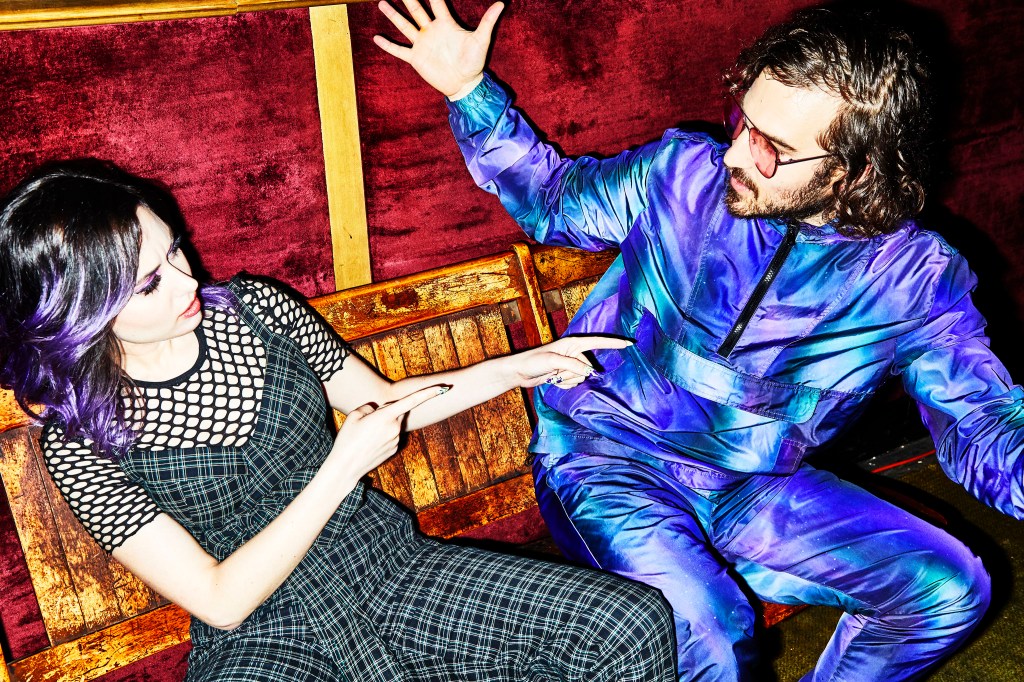 Vitale is a small 28-year-old with purple streaks in her hair, a toothy smile and tiny, slender hands. She hails from the Metro Detroit area — a town called Sterling Heights that she jokes has been nicknamed “Sterling Whites” for its primarily Caucasian demographic. Singer-Vine, a long-haired guy from Berkeley, Calif., who has a joke just goofy enough to be hilarious lined up at every moment, has worked in music for more than 10 years. Under the moniker Campa, he made music with the pop-rap group The Cataracs alongside Niles Hollowell-Dhar, who now DJs with the stage name Kshmr (Singer-Vine wrote their number-one hit, “Like a G6″). But with Terror Jr., Singer-Vine and Vitale have the chance to write pop songs that send more serious messages. Music publications have labeled Terror Jr.’s music — which contain song lyrics like “white women voted for Trump” — as political. But Vitale insists it isn’t limited to just that.

“It makes me imagine something different than what we are,” she says. “I actually prefer when people say ‘sugary pop group’ and then they’re sort of surprised by the lyrics. If they’re drawn to the sound and the music first, then they slowly realize that we are entering their minds with these other messages strewn in there. I like when people approach it that way. They’re drawn in by the pop and then maybe they stay because of the underlying message.” 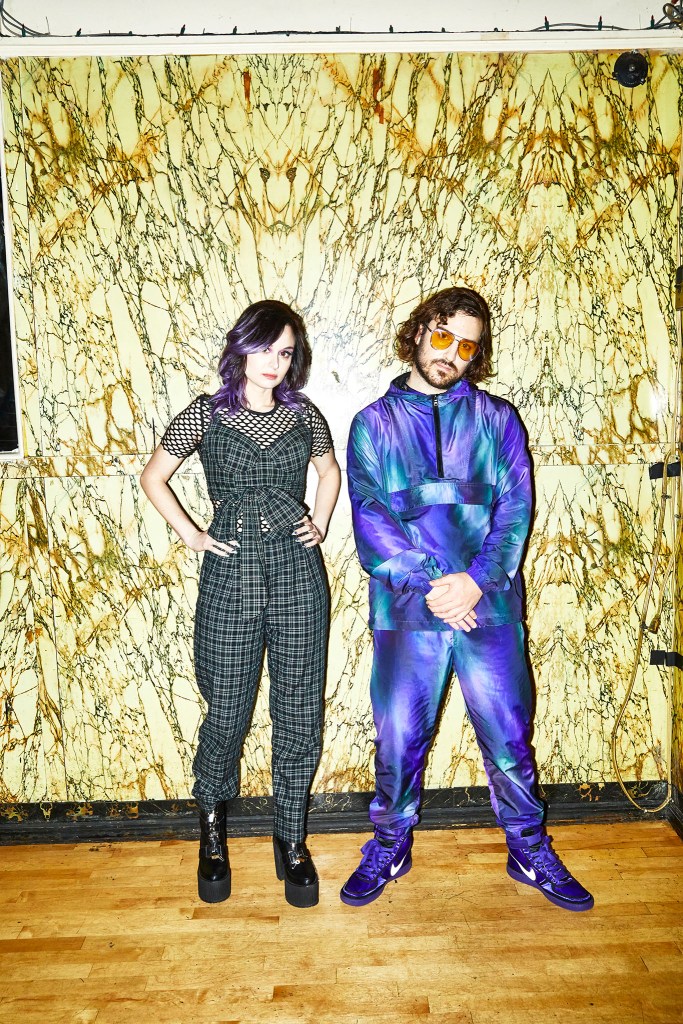 The fans, which are cult-like in their love for Terror Jr., do feel a sense of connection to the band. Singer-Vine and Vitale say they’ve noticed this during their live shows and at the meet-and-greets.

“We’re always at a loss for words because we just can’t believe they want to meet us — because we’re like, ‘Prepare to be disappointed.’ I mean, Lisa used to be a dog trainer and I’m just a schmuck,” Singer-Vine laughs. “After meeting these people, you realize there is a massive audience out there who’s actually looking for that brutal, almost awkward truth, and not lyrics about flamboyant or lavish lifestyles.”

Creating the album “Unfortunately,” required an entirely different process from that of the three “Bop Cities.” In the latter’s case, the band finished the songs quickly, releasing them within a couple of weeks or months to keep their listener’s interests piqued. “Unfortunately,” on the other hand, called for hours of listening and relistening to the production and each line of every song.

There’s one lyric in particular that changed the entire trajectory of the writing for “Unfortunately.” According to Singer-Vine, it shifted the template for the whole album. On “Bop City 2,” there’s a line in the song “Caramel” that, although too risqué for print here, suggests a person upset or perturbed by an LGBTQ person’s lifestyle and sexual orientation might themselves be gay or lesbian.

“It was a song we wrote for months, sending lines back and forth, trying to get them perfect,” Singer-Vine recalls. “It changed the entire group, it changed what we were doing. I remember when we played our first show in San Francisco, we opened with ‘Caramel’ and I saw a few people in the front row were crying. That moment was a revelation, and my proudest. I was like, ‘Dude, just say something, and mean it.’”

It was then that Terror Jr. went hard to incorporate themes in their music that questioned white privilege, religion, homophobia and people cast out by mainstream society. It draws in a listener base that’s felt misunderstood historically, but can connect with each other through the music.

“I want to find all the angry, trampled-upon people. I seek them out so I can speak for them. And, I want to get on our own heads first,” Singer-Vine says. “Especially our fans of color and different cultures, I want them to hold us accountable. Like, let us do what we can. Make us do what we can.” 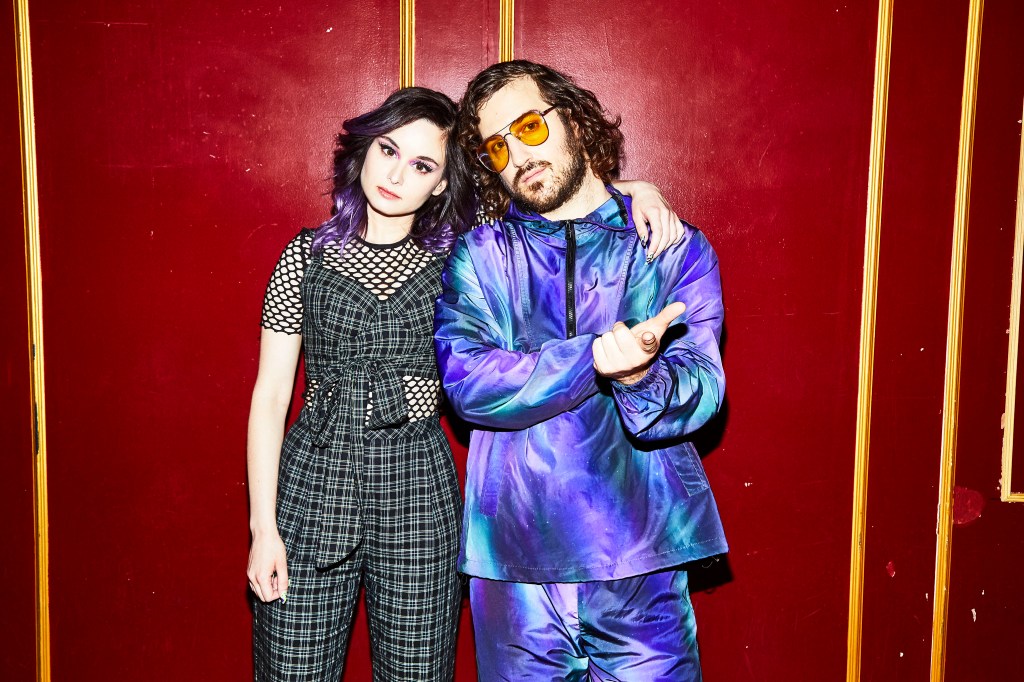 “The line that means a lot to me when I stand up there and sing ‘Caramel’ is, ‘If my skin was any darker, they’d be spilling my blood,’” Vitale adds. “We’re two white people who get to make music and we’ve gotten very lucky with what’s brought us to this point. I want to acknowledge that privilege.”

At the concert that same evening, Singer-Vine and Vitale do yet another meet-and-greet, as they’ve done throughout the tour. They hug their fans, some of whom say they’re shaking as they nervously take pictures with the band. But in those moments, there’s no separation between Terror Jr. and their listeners. And when the lights in the Warsaw go down at the start of the show, they stay that way for the first song. Vitale and Singer-Vine emerge on stage with a drummer and keyboardist, and a backup singer. They belt out “Maker,” the opening song on the album, completely in the dark. But then the soft, purple and blue lights turn a shade of white, and suddenly, you can see them — their smiling faces, their joy, everything about them.

Saweetie Watches the Critics Argue While She Goes to Work