Known as the rock’n’roll cobbler, de Havilland’s glamorous, extravagant designs have been worn by men and women from David Bowie and Cher to Kate Moss.

LONDON — Terry de Havilland, a British footwear pioneer whose skyscraper shoes were bright, outrageous and full of attitude, has died at age 81.

Known as the rock ’n’ roll cobbler, the London-based de Havilland treated shoes like small, spectacular works of art at a time when footwear was largely conservative, discreet and functional.

He worked silver sparkle, metallic leathers, shiny reptile skins  and transparent plastic into platform heels, wedges, stilettos, lace-ups and cowboy boots, designs that were all about adding height, glamour and a wild beauty to the already extravagant clothing of the late Sixties and the Seventies.

“He put the rock-star quality into footwear. Before Terry de Havilland, people didn’t look down at shoes. He made them look down. And I think he really connected celebrity culture with footwear, which of course now we take for granted,” said Darla-Jane Gilroy, who heads the Craft Program at London College of Fashion, UAL.

In 2006, de Havilland told The Guardian newspaper: “I’ve learnt about women from the feet up; I love legs, I’m always looking at them. I’ve done lots of shoes for burlesque (and trannies), and I love those curvy, sexy ladies who know how to walk.”

Katie Grand, editor in chief of Love magazine, called de Havilland “one of the best shoe designers there has ever been. He was hugely influential and also made some of the most comfortable skyscraper shoes imaginable. He had a great sense of proportion and color.”

He created the shoes for Tim Curry in “The Rocky Horror Picture Show” in 1975, and for Angelina Jolie in “Lara Croft: Tomb Raider” in 2001, among other films. His designs are part of the Victoria and Albert’s fashion collection, and have become collectors’ items. 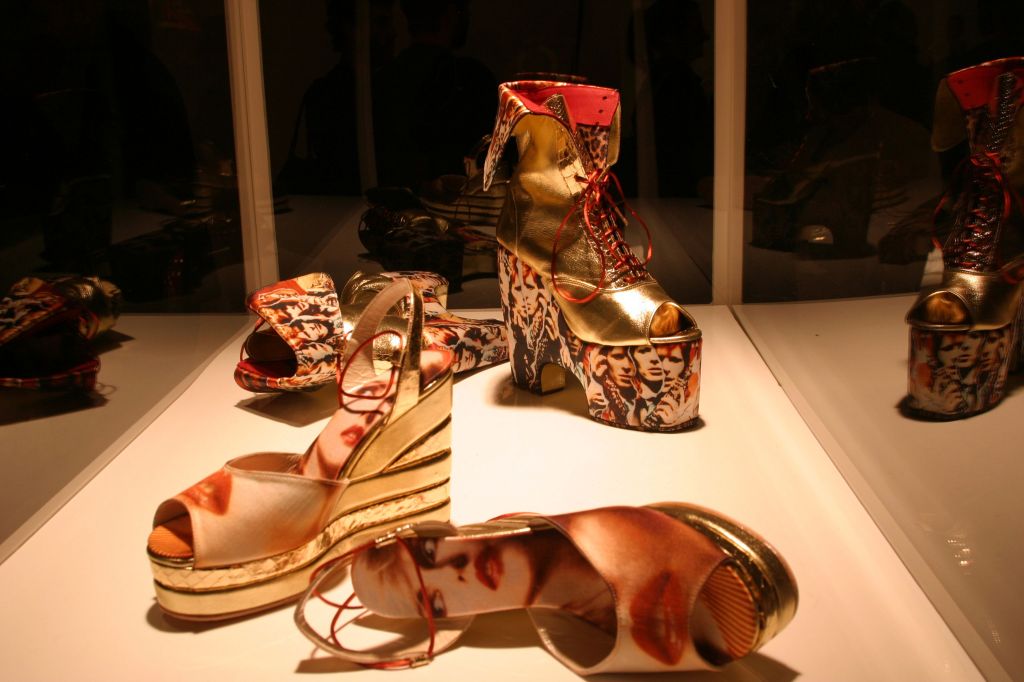 “In the Sixties, they were the standard party shoe — high, impractical, dangerous, colorful. You put them on and suddenly you were seven inches higher, long and skinny,” said Bates, adding that before de Havilland came along, British women wore “boring court shoes, what our mums were wearing in the Fifties and early Sixties.”

Jan de Villeneuve said, “as an American girl who had worked in Paris for a couple years, I loved the eccentricity of Terry’s shoes.” She pointed to a picture of herself in the January 1971 edition of British Vogue wearing a pair of de Havilland’s striped wedge heels. “Another favorite pair is purple crocodile/alligator from 1973. I may still have those.”

In many ways, de Havilland was the Mary Quant of footwear, giving young women the chance to stop dressing like their mothers and unleash their inner dancing queen, cover model, pop star or party girl.

De Havilland was a larger-than-life figure himself, admitting to The Guardian newspaper that he designed most of his shoes “on acid. The opening party for my shop in the King’s Road was famous for the three Cs — Champagne, cocaine and caviar. God knows who was there — everybody.”

Born in Barking in East London, de Havilland worked at Waverley Shoes, his father’s business, making shoes for the showgirls of London’s Soho as well as for the wealthy patrons of West End theaters. While his shoes may have been flamboyant, he took quality and construction seriously, always designing directly onto shoe lasts.

De Havilland would later become a visiting professor at London College of Fashion, and a member of the Cordwainers Advisory Panel. Cordwainers is a school within LCF that teaches footwear design and technology.

A famously sparkling raconteur with an infectious laugh, de Havilland opened his first store, Cobblers to the World, on the Kings Road in 1972.

Over the years he channeled glam rock, punk and cyber-goth aesthetics into his designs, which employed studs, spikes and Latex. His brands included Kamikaze Shoes and The Magic Shoe Company.

More recently, he designed a couture range from his studio in Dalston. In 2013, he opened a pop-up shop, his first on the King’s Road since Cobblers to the World shut its doors in 1979.

At the time of his death, he had lost the ownership rights to his name and archive after a deal that went sour with a footwear industry figure and family member.

Gilroy of London College of Fashion said it was de Havilland who inspired her to design shoes when she was a student at Central Saint Martins, although her love of his style started long before. 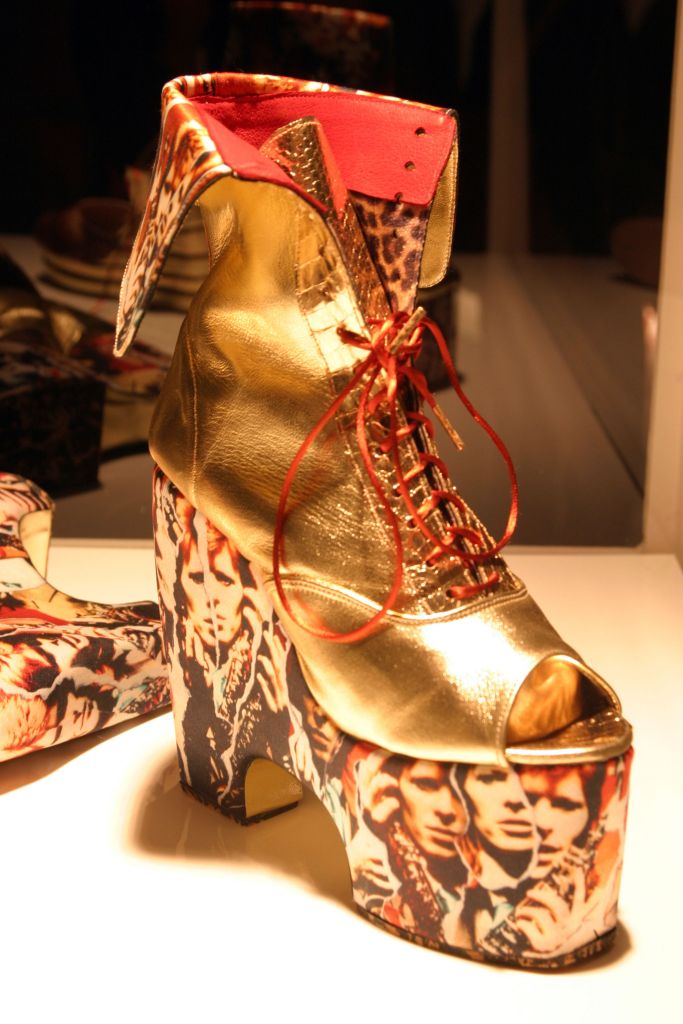 “When I was a teenager in the Seventies and Eighties, he was the king of shoes. I can remember at the age of 15 begging my mother to buy me a pair of silver, snakeskin, ankle-strap shoes from Terry de Havilland, which she very kindly did.”

“They respected him, they knew him, his reputation came before him. He was very generous with his time, one of those people who always stayed behind and spoke with students and inspired several generations of shoe designers and shoemakers who came after him,” she said, pointing to the likes of Charlotte Olympia Dellal and Sophia Webster.

Sarah Day, course leader of Cordwainers’ B.A. (Hons) footwear product design and innovation program, said de Havilland’s designs “have wowed, bought joy to shoe lovers everywhere, and set the pace for future generations of shoe designers. His talents will be fondly remembered and many of our students will continue to aspire to his success. He will be a much missed character of the shoe trade.”

Designer Rupert Sanderson said he and his team were referencing de Havilland’s work earlier this week. “He was unique in our world in telling a very personal story without compromise. The out-and-out showmanship, his double platforms and insane wedges are a benchmark of glitter-ball glam,” said Sanderson.

Actress, designer and founder of the new yoga and activewear brand Frost, Sadie Frost said she has always loved de Havilland’s shoes. “They are easy to walk in and I’m glad of the extra height with the Terry platform.” She said that de Havilland designed shoes for her former label FrostFrench.

“We had a glam-rock show, so his shoes were perfect: They were acid and emerald and had huge platforms. Lily Cole and Daisy Lowe wore them and they were super sexy,” Frost recalled.

It wasn’t only students and a younger generation of designers who loved de Havilland’s style — and personality. Retailers loved his energy and aesthetic.

In 2011, following his 50th anniversary, Selfridges honored de Havilland with a monthlong exhibition in its shoe galleries, while Ed Burstell, former managing director of Liberty, recalls getting a history lesson at the designer’s elbow.

“We spent hours in his ‘time travel’ studio — an explosion of the last 50 years of his work and life. What makes him so important was his constant design aesthetic over a long period of time. And as talented as he was, what you always came away with was just how fun he was. And the stories — he had the scoop on everyone! He’ll be so missed,” said Burstell.

De Havilland is survived by his wife and business partner Liz; sons Jason and Caesar; and grandchildren Joseph, Leila, Jamie, India and Kai.