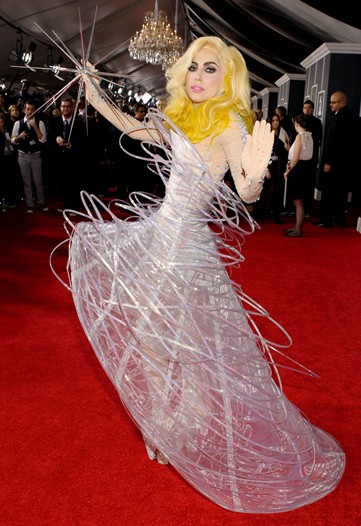 There was no shortage of sparkle for the 52nd Annual Grammy Awards, held Sunday night at Los Angeles’ Staples Center, where designers sent out their most bejeweled, revealing frocks.

But even before the show began, Lady Gaga stole the show in no less than three Giorgio Armani Privé looks, part of a collection that had been specially designed for her.

Best New Artist nominee Keri Hilson, who walked the red carpet in a Dolce & Gabbana gown, said she was pulling for Lady Gaga at the awards, and applauded her fellow nominee’s flair for the theatrical when it comes to fashion. “I’ve got to give it to Lady Gaga, her style is just amazing, she’s really got every element going,” said Hilson.

In the end, Taylor Swift and Beyonce swept the awards with Album of the Year and a record-breaking six Grammys, respectively, but Gaga went home with two golden gramophones and an A for effort in envelope-pushing fashion.

“I can’t wait for the next outfit,” said Stephen Colbert, who won a Grammy for the soundtrack to his holiday special. “They’re just gonna spread glue on her and run her through a build-a-bear workshop.”