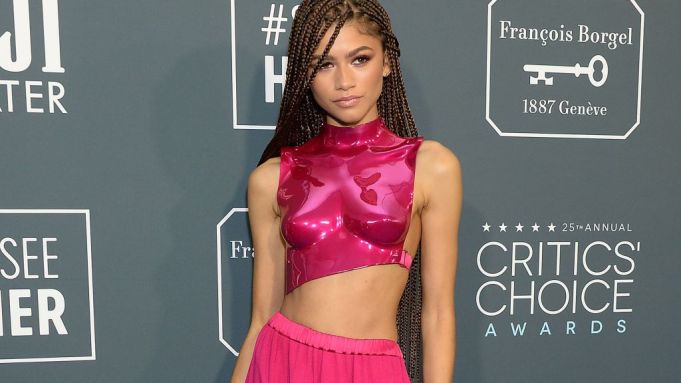 2:02 p.m.: “It’s fun seeing her go through the process again,” says Lauren Ash of “Superstore” costar America Ferrera, who’s pregnant with baby number two. “She’s the hardest-working woman. I don’t know how she does it all.”

2:07 p.m.: Icelandic musician Hildur Guðnadóttir, who became the first solo woman composer to win a Golden Globe for Best Original Score for “The Joker,” shares that it’s her first time meeting much of the cast and crew of the film. “As a composer, I don’t leave my studio much,” she says. Of being a trailblazing figure for women in her industry, she adds: “It’s really important for young women starting out that they see it’s a possibility.”

2:10 p.m.: “It’s my first Critics’ Choice,” says AJ Michalka of ABC’s “Schooled” and “She-Ra and the Princesses of Power,” nominated for Best Animated Series. The actress is also one half of musical duo Aly and AJ with sister Aly Michalka. “We have a platform that has been gifted to us,” says AJ, in an Elisabetta Franchi gown, of their willingness to share their political views. “If we don’t use that for what we believe in, then why even have a platform? I really feel like it’s important to speak what you believe in, enforce ideas that you truly believe in and see if other people can get on board. And with young fans, it’s important to guide them.”

2:16 p.m.: “Well, it’s earlier in the day,” says “The Marvelous Mrs. Maisel” actor Tony Shalhoub of what sets the Critics’ Choice Awards apart from other award shows. “That means that we all won’t be completely run out by the end of the day.” He’s been on countless red carpets and has a routine at this point, when it comes to getting ready. “I turn on my iron,” he says in his Canali suit. “I like to press the shirt. I like to take control of those things and now I’ve got it down to a system. It’s more efficient and less time-consuming.”

2:27 p.m.: “Double polyester in the heat is not your friend,” shares costume designer Ruth E. Carter of working on “Dolemite Is My Name,” the Seventies-era biographical comedy starring Eddie Murphy. “We had to navigate that every day.” Carter would end up taking home Best Costume Design, while Murphy received the coveted lifetime achievement honor.

2:32 p.m.: “Patsy & Loretta” costars Megan Hilty and Jessie Mueller are nominated in the same category, Best Actress in a Movie/Miniseries. “Oh, my God, but that’s the joy,” says Mueller. “I was teasing Megan. I was like, ‘Wait, so we get to go to this together.’ I was like, ‘I’m in.’ As long as I get to buddy up with her, I’m happy.” The winner was Michelle Williams for “Fosse/Verdon,” though the actress was MIA. On stage, presenter Bradley Whitford joked Williams ‘didn’t care enough’ to attend and accept the award.

2:37 p.m.: “It’s Tadashi Shoji,” says D’Arcy Carden of her dress. “I work with stylist Erica Cloud. She’s incredible. She also dresses Awkwafina. She’s just cool as hell. She knows the cool designers. I’m like, ‘That’s pretty. That’s pretty.’ But she knows what she’s doing.” The actress and comedian, who works on NBC’s “The Good Place,” is expected to appear in Amazon’s upcoming series “A League of Their Own,” based on the 1992 film by director Penny Marshall.

2:52 p.m.: “I miss acting her writing,” says “Fleabag” actor Brett Gelman of the show’s creator Phoebe Waller-Bridge, who received Best Actress in a Comedy Series. “This is a bit of a random shout-out, but you have no idea how you can accidentally inspire people just by doing your work, and somebody inspired this show in a way that you’ll never know,” Waller-Bridge said when accepting the award. “And that’s J.Lo. I don’t know where she is, but I decided that the priest’s favorite song was ‘Jenny From the Block,’ and it opened the entire character up for me. So, I don’t know where she is, but that’s really genuine, so thank you, thank you J.Lo.” Jennifer Lopez was long gone by then. She had sneaked off not long after her category, Best Supporting Actress, was announced. The award had gone to Laura Dern for “Marriage Story.”

3:01 p.m.: 18-year-old “When They See Us” actor Asante Blackk, wearing Prada, shares he’s hoping to meet his “favorite actor of all time,” Joaquin Phoenix, who was one of the first to take the stage when he accepted Best Actor for “The Joker.” “First, I’d like to thank the awards for going plant-based, trying to offset our carbon footprint,” said Phoenix during his speech. “It sends an amazing message.” The vegan menu came courtesy of chains Baja Fresh and The Counter with a starter of vegetables, followed by veggie burritos and Impossible burgers. Tables were filled with sides of waffle and tortilla chips, breadsticks and overflowing Champagne, and later came dessert from Pinkberry and Cold Stone Creamery, offering the option of rosé and lemon sorbet or fudge truffle with rainbow sprinkles. Also on hand was Pixi Beauty, which provided guests with makeup touch-ups throughout the ceremony.

3:12 p.m.: “My name is Julie Hagerty,” the “Marriage Story” actress tells Chrissy Metz of “This Is Us.” “I’m a huge fan.” The two hug. “I know who you are,” responds Metz. “I love that she just introduced herself,” she adds turning to her publicist. Nearby, costar Mandy Moore rushes by in a black Elie Saab jumpsuit.

3:16 p.m.: Fourteen-year-old English actor and Young Performer nominee Noah Jupe, who acts opposite Shia LaBeouf in “Honey Boy,” had nothing but praise for his costar. “I have to say, once you let Shia into your heart, you can’t get him out,” he says, in a Gucci suit, donning a silver, lightening-shaped earring that he found “at an antique store in Buffalo, N.Y.” He’ll next appear in John Krasinski’s “A Quiet Place: Part II.” “I’m looking forward to that,” he says, adding that he’s also been busy balancing school in London.

3:18 p.m.: “I wanted to drip,” shares Mj Rodriguez, nominated for Best Actress in a Drama Series for “Pose,” of her beaded Moschino gown by Jeremy Scott. “I saw it from afar when my stylist came in with it. I was like, ‘Girl, that’s what I want.’” Of the recognition, she got emotional, adding: “The fact that they’re seeing me as a leading actress, it’s beautiful. I never thought that that would happen for a girl like myself. It feels good. That means it’s not just a stigma. That means people aren’t looking at me as that trans girl. They’re looking at me as a leading actress of a show.”

3:25 p.m.: “Show her your shoes,” “The Marvelous Mrs. Maisel” actress Alex Borstein tells her date, her 85-year-old father. His sneakers were marked with the name of the show. When Borstein wins for Best Supporting Actress in a Comedy Series, she thanks him and her mother: “You are the greatest critics in the world…You made me funny.”

3:28 p.m.: A look down the red carpet (which is in actuality, blue) press line shows Florence Pugh of “Little Women” standing alongside Sarah Snook of “Succession” and Andrew Scott of “Fleabag,” who won Best Supporting Actor in a Comedy Series. “If I catch the light right, everyone gets blinded,” says Pugh, shimmying for cameras in her rhinestone-covered Prada dress. Though the English actress didn’t win in her category (the award went to Dern), she now has the Oscars to look forward to; she’s nominated for Best Supporting Actress.

3:43 p.m.: Adam Sandler dodges reporters but stops to say hi to “Uncut Gems” directors, brothers Josh and Benny Safdie. Soon thereafter, he shares a high five with actress Margaret Qualley of “Once Upon a Time in Hollywood” and “Fosse/Verdon.”

3:45 p.m.: “The Marvelous Mrs. Maisel” actress Rachel Brosnahan, wearing Carolina Herrera, is eating Hanukkah-themed cookies out of a ziplock bag, a snack courtesy of a reporter friend. At the Golden Globes, the two had shared Cheetos. It’s a tradition she seems delighted to engage in.

3:46 p.m.: Jennifer Lopez, wearing a Georges Hobeika gown, makes her entrance in a flash, sans Alex Rodriguez. “OK, J.Lo,” exclaims an onlooker. The star is surrounded by an entourage of five as she darts inside.

3:47 p.m.: “We’re going to have cocktails later,” Billy Porter tells Brosnahan, as the two share a moment admiring each other’s looks. Porter, donning a minty green jumpsuit by Hogan McLaughlin, has temporary butterfly tattoos on his chest and arms. “It’s a representation of the transgender community,” he later shares immediately following the ceremony. “They start as one thing and then transform into another.”

3:49 p.m.: The live award show, airing on CW, is 11 minutes away from starting with host Taye Diggs. “Schitt’s Creek” actors Eugene Levy and Catherine O’Hara hurry by. Five minutes later, it’s Nicole Kidman. “We love you, Canada,” she tells a Canadian camera crew that’s been yelling her name. She blows them kisses.

3:54 p.m.: The next — and last — to cause excitement is Zendaya, who arrives in a show-stopping ensemble. “Why does that look familiar?” a reporter asks of her hot pink, molded and metallic Tom Ford creation. Gwyneth Paltrow recently appeared on the February cover of Harper’s Bazaar in the same top, though that clearly didn’t stop the “Euphoria” star and her stylist Law Roach from opting for the garment. Paltrow took to Instagram — via a post by Man Repeller, a photograph of Zendaya in the look — writing: “Thank god I can say I have something in common with Zendaya.”