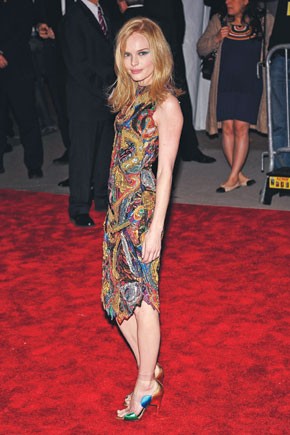 A as in Armani, Anna and almost every A-list star you can imagine. They all stormed the Metropolitan Museum’s Costume Institute Gala for the opening of the “Superheroes: Fashion and Fantasy” exhibition.

A as in Armani. A as in Anna. A as in almost every A-list star you can imagine from George Clooney and Julia Roberts to Katie Holmes and Tom Cruise, David and Victoria Beckham, Beyoncé Knowles and Jennifer Connelly. They all stormed the Metropolitan Museum’s Costume Institute Gala for the opening of the exhibition “Superheroes: Fashion and Fantasy.”

As guests walked through the Metropolitan Museum’s lobby and saw the huge statues of Batman, Superman and Wonder Woman, they each pondered which one was them. Christina Ricci was wishing she had a superpower herself. “I would want to read minds. It would be so fun.” Meanwhile, Tom Brady, referring to girlfriend Gisele Bündchen, said, “She’s telepathic. She reads my mind — it’s a problem.” Other powers guests were wishing for ranged from invisibility to flying to creating world peace, and oddly enough, being Peter Pan. Some partygoers were just happy to be themselves. When asked which superheroes they looked up to, both Donatella Versace and Karl Lagerfeld replied “Myself.” Marc Jacobs even went so far as to don Superman underwear. But Amanda Peet said, “I would make all of my friends and myself have thinner thighs.”