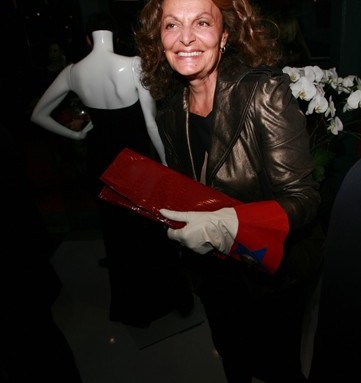 In case there was any question as to her belief in female empowerment, Diane von Furstenberg sent a loud and clear message Tuesday night when she celebrated the launch of her new Wonder Woman-inspired clothing collection and limited edition comic series “The Adventures of Diva, Viva & Fifa” at her Washington Street headquarters.

And the designer proved her own best example: fresh off (as in an hour earlier) co-hosting duties at the CFDA/Vogue Fashion Fund event, von Furstenberg was busy signing copies of her limited edition books and comic strip emblazoned bags (a portion of the evening’s sales benefited the women’s charity Vital Voices). All this before hopping a jet to Europe, where she will speak at a women’s conference in Deauville, France and then fete a store opening in Tokyo’s Roppongi district. Von Furstenberg has had a busy week. On Monday, she opened up her studio to Kim Hastreiter, the Paper magazine editor and author of a book on Geoffrey Beene, along with Narciso Rodriguez, Isabel and Ruben Toledo and Agnes Gund. How does she manage such feats?

“I’m a Wonder Woman!” she declared.

Others in the crowd seemed to agree.

Guests like Becki Newton, Georgina Chapman, Keren Craig (who once dressed up as the superheroine as a child) and Rachel Roy sipped Champagne and nibbled on mini burgers while DVF employee and reality star Whitney Port was trailed by a TV crew for her “Hills” spinoff “The City.”

A more reticent Ziyi Zhang arrived on the arm of beau Vivi Nevo and was rather modest about her own Wonder Woman side.

As the party wound down, the hostess seemed unconcerned about missing her 10 p.m. Europe-bound flight: an hour before her take off time, she discreetly changed from her slinky party dress into pants and flat boots, no phone booth required.