At the Whitney Gala on Tuesday night, this year celebrating a project by Richard Tuttle, the invitation called for women to wear PMS Blue 630 (that's Pantone Matching System blue number 630, in case you didn't get it). 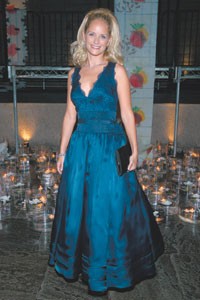 NEW YORK — Ladies, get your party frocks ready for the real social swirl has begun. At the Whitney Gala on Tuesday night, this year celebrating a project by Richard Tuttle, the invitation called for women to wear PMS Blue 630 (that’s Pantone Matching System blue number 630, in case you didn’t get it).

Chloë Sevigny complied with a midnight blue minidress paired ever so chicly with knee-high wedge boots. “They are Tara Subkoff for Easy Spirit,” said the actress, giving her pal a plug. “And they are sooo comfortable.”

Gala chair Heather Mnuchin opted for a navy lace number from Carolina Herrera. “I had one day to shop and I walked in there and they had this wedding dress that was already dyed blue, so I thought it was perfect,” enthused the blond mother of three. Peggy Siegal, Beth Rudin deWoody and Evelyn Lauder followed suit in navy hues, while other guests eschewed the dress code with aplomb, including Dayssi Olarte de Kanavos, Muffie Potter Aston, Anne Bass and Rachel Feinstein.

As guests supped on lobster potpie and heirloom tomatoes upstairs, the younger generation of socials (and those who like to hang with them) filed in for the museum’s after-party, which was held in the red-light and carpet-bedecked, lower-level gallery.

Things were decidedly calmer at the Frick Museum’s Annual Autumn Dinner on Monday night, where it felt like a flashback to the Kennedy era amid the bouffant hairstyles and Jackie O silhouettes. A genteel crowd of New York names like Phipps and Clay ventured out to honor the 12th Duke of Devonshire, whose daytime moniker is Peregrine Andrew Morny Cavendish. His noble presence certainly impressed the other guests, who obediently filed into a receiving line to greet him.

“I’ve been commuting back and forth,” explained the art-collecting duke, who had just flown into town from London to attend his big bash, “and I will be for the next month or two. It’s not so bad,” he joked. But what he really wanted to do was sing the praises of his niece, the supermodel Stella Tennant, especially in light of Kate Moss‘ fall from grace. “Stella’s very grounded,” he bragged. “Even though she’s surrounded by all of that stuff, she’s doing quite well.”

The surroundings at the Luca Luca luncheon at Christie’s last week were just as stunning as those of the Frick: The event was in honor of the auction house’s Magnificent Jewels sale, and several million dollars’ worth of bijoux were being passed around to play with. It was a good reward, considering everyone, including Jennifer Creel, Serena Boardman and Ulla Parker, had trekked through a torrential downpour, for which hostess Nathalie Kaplan was exuberantly grateful.

As a Luca Luca fashion show was staged in the midst of the Cobb salads, Helen Schifter mused about what to wear to Samantha Boardman‘s wedding celebration this weekend. “She said we should all wear something fun — and no black,” Schifter said, casting a glance at a plunging red dress hanging off a waifish model. “What am I going to do?”