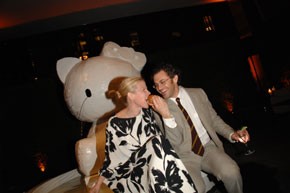 He’s poked fun at the fashion crowd with a Chanel guillotine and turned a Prada box into a blue print for a Nazi death camp, but the fashion world showed up in force Thursday night to the opening of the Tom Sachs bronze collection at Lever House, which featured massive bronze sculptures of the artist’s favorite muse: Hello Kitty. To install the largest of them, a crew used a giant crane and flew in the piece, which was too tall to fit underneath the atrium. “It was out control,” said Sachs’ friend Cecilia Dean, who runs Visionaire and witnessed the set up while passing by. “All of Park Avenue was shut down, and there was steel on the ground [anchoring the crane] to prevent it from crashing into the subway.” (Apparently, Kitty is very heavy.)

In the front of the room, Sachs had installed two fountains with crying Kittys, the message of which has something to do with the current economic downturn. Earlier in the week, Sachs told The New York Times, “It’s an important symbol of how there is respect and integrity to be had by everyone along the chain of the consumer cycle, even at the end.”

Did this mean the artist was taking a certain pleasure in the recession? “Oh no,” he told WWD, looking as if he’d been asked the world’s stupidest question. “The recession is horrible. It’s hard for a lot of people.” Then he ran off, without elaborating.