Riley Keough held down the fort of star power at Monday’s New Yorkers For Children gala. 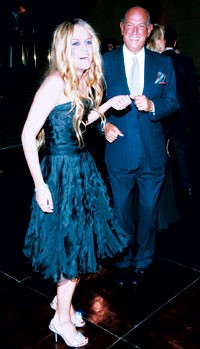 Riley Keough, Elvis Presley’s 15-year-old granddaughter, had to hold down the fort of star power at Monday’s New Yorkers For Children gala while her mother, Lisa Marie, was reportedly lending a hand to the family of Johnny Ramone, who died last week of cancer.

Keough, who tends to the yes-no genre of conversation, said she chose her black Oscar de la Renta on the Internet. “I went online and looked at all the dresses,” she explained. “And they sent this one to my hotel room.” She was spending the entire week in New York. “Shopping” is what she offered as the agenda.

Though Keough added that she wears de la Renta on a regular basis as well as Dolce & Gabbana, Missoni and Dior (she will appear in ads for the house’s new jacket line), she said her friends don’t get jealous of her fashion tastes. “We share clothes a lot,” Keough explained. But what about something more age-appropriate, say Wet Seal? The budding model dismissed the question with a finger gesture that said, “Shame on you.”

Because of the involvement of Oscar de la Renta and Anna Wintour, the gala is generally thought to be a fashion highlight of the fall — and the women feel the pressure. “Of course you get nervous choosing what you’re going to wear,” said Anne Grauso, who went with a black Calvin Klein gown and vintage Chanel jewelry. “It’s the beginning of the season, we’ve all got our new fall clothes, a lot of the chair people are in the fashion industry.” But while the night drew such guests as Eliza Reed Bolen, Lauren du Pont, Jessica Seinfeld and Dayssi Olarte de Kanavos (in a gown Alvin Valley whipped up in 48 hours), there were few fashion sparks.

Maybe that’s why Jennifer Creel, Tory Burch and Carlos Souza defected early to Scott Currie’s 40th birthday party at Doubles. The bash drew the likes of Nina Griscom, Marjorie Raein and Bettina Zilkha, as well as Currie’s boss, Susan Magrino. Joan Rivers toasted the birthday boy: “Life’s been good to you, Scott. Life’s been better to Tom Cruise, but what can you do?”