Last week showed the first semblance of social movement in a particularly frosty January. On Wednesday, Claire Bernard, Jackie Sackler and Tinsley Mortimer headed to the Chloé store on Madison... 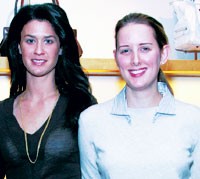 Last week showed the first semblance of social movement in a particularly frosty January. On Wednesday, Claire Bernard, Jackie Sackler and Tinsley Mortimer headed to the Chloé store on Madison Avenue to kick off the Winter Dance for the Museum of Natural History for which the Phoebe Philo-designed label is a sponsor. The next night, Bernard, BJ Topol Blum, Serena Altschul, Charles Rockefeller and Reed Krakoff were just some of the notables hoping to gussy up their (probably already very nice) apartments at the 51st Annual Winter Antiques Show’s Young Collector’s Night. Meanwhile, a few blocks away at the H. Stern store, Diane von Furstenberg helped Alex Kramer, Rachel Peters and Jennifer Creel shop from her spring line of jewelry. “I have known most of these girls since they were in kindergarten,” noted von Furstenberg. “I saw them grow up and become women. They have always known me, as Tatiana’s or Alex’s mom. They wrote down what they loved, and I’ll be writing to their husbands and boyfriends to help them out on Valentine’s Day.”