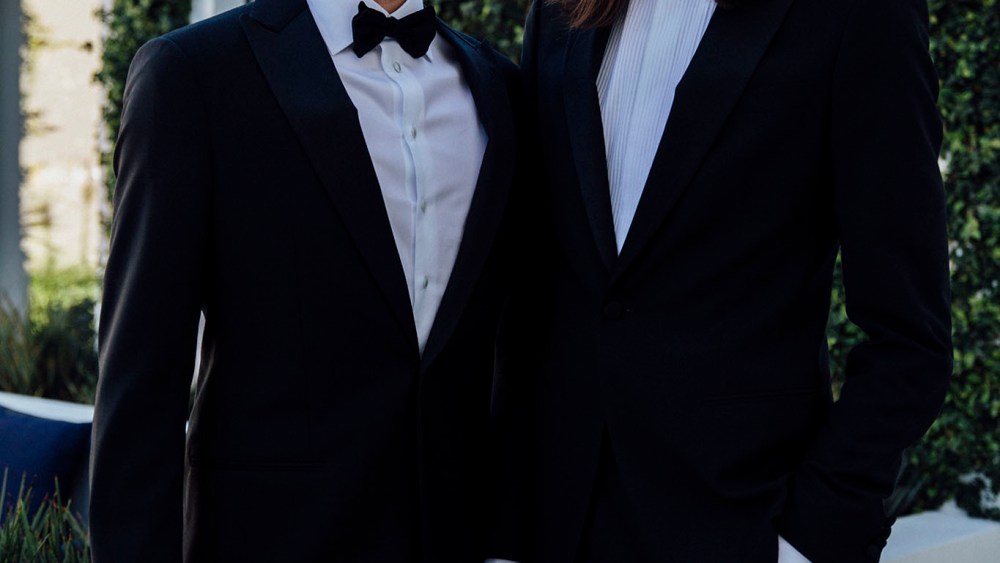 For the first time, two brothers shared the title of Golden Globe Ambassadors, a role given to a celebrity offspring who assists in presenting trophies to winners during the awards show.

“I wasn’t sure for the longest time if I was going to get to wield a Globe,” said 18-year-old Paris Brosnan.

“Wield a Globe,” repeated his older sibling, 22-year-old Dylan, in amusement. Their father, actor Pierce Brosnan, stood nearby, smiling proudly with his phone in hand as he captured his sons inside The Beverly Hilton, where the show took place on Sunday. The brothers — and Pierce, there in support — spent much of the weekend at the hotel preparing for the ceremony, which is now in its 77th year.

“I now know that I’m going to get to, in fact, pass one off,” Paris continued. “It’s going to be hard to say goodbye to it.”

“There’s going to be many,” Dylan said. “You’re going to have to say goodbye every time.”

“I might take a selfie with it,” added Paris. “I probably will take a couple selfies with it, hold it.”

They had just finished a press conference and were now fitted in their looks for the big day, tailored tuxedos courtesy of Giorgio Armani.

“They’ve dressed our dad a lot in the past, and so we are lucky we have that connection,” shared Dylan of the Italian fashion house.

Paris nodded. “They didn’t hesitate when they heard we needed suits,” he said. “They dressed us in really comfortable, beautiful suits that will last us a lifetime. I’m very grateful for the opportunity to wear Armani.” He paused before adding: “Maybe there’s an advertising campaign coming my way soon.”

Paris is playful, happy to lighten the mood. As the more sun-kissed of the two, it’s no surprise he surfs. They grew up in Malibu, Calif., after all. Dylan, who has shoulder-length hair, is more reserved, but warm and friendly. Tall and thin, they both model and are signed to Next Management. Paris, at 6 feet, 1 inch, has been on the cover of Numéro Berlin and GQ Korea, and walked the runway for Ralph Lauren, Moschino and Balmain. Dylan, who’s even taller at 6 feet, 5 inches (and who’s gotten paparazzi attention), has been on the cover of GQ Germany and in campaigns for Saint Laurent and Burberry Prorsum.

It seemed fitting when Paris described his brother’s style as “classic, very vintage…minimalistic, sharp. It’s leather boots with the Wranglers, then there’d be a jacket that you found at a thrift store that looks expensive, but it’s not. It’s 20 bucks.” Dylan explained that Wrangler trousers are the only ones that fit his frame. Levi Strauss & Co., too, is a favorite.

For his part, Dylan said Paris’ style is “low key, fashionable, but at the same time, it’s comfortable. It’s like luxury streetwear.” One of Paris’ favored brands is Bleusalt, a Malibu-based label by Lyndie Benson, a friend of his mother’s, journalist and filmmaker Keely Shaye Brosnan. “It’s sustainable,” he said. “They make their clothing out of beechwood, which is a really soft fabric. I love it for just lying on the couch, lounging. And then for nice, quality tailoring, I love Acne Studios. They’re amazing.”

Items he treasures are his Saint Laurent and Ralph Lauren leather jackets, he said (“You make memories in them, and they get beat up and have all your energy and stories”). Dylan, who’s in the band Raspberry Blonde, chose his guitars. He lit up explaining that his favorite one is a model from the Fifties. Music, it turns out, is his first love.

“I do my own music and write, play guitar and sing,” Dylan said. “And then I play with a few guys, and we kind of all sing and do harmony stuff and covers and play gigs around town.”

He’s also in film school. In fact, they both are. Dylan has one more semester left at the University of Southern California, while Paris is in his first year at Loyola Marymount University.

“I want to do documentary style involving a bunch of people in a cool place with an element of giving back, because I know so many famous, young kids who are doing such cool stuff, but they all want to be able to give back and help the less fortunate,” Paris said.

One way the two are giving back is through their involvement with Feed, the Lauren Bush-founded organization that sells goods, from bags to accessories, to provide meals for underserved children around the world. As part of their role as Golden Globe Ambassadors, the brothers have used their platform to shed a light on the cause.

“I think the Hollywood Foreign Press [Association] made a really generous donation to Feed, which is amazing,” Dylan said.

Paris saw Feed’s efforts of providing meals to kids in schools, as part of a collaboration with French skin-care and cosmetics company Clarins, firsthand when he was invited to Sri Lanka to document the initiative.

It’s a contrast to the Hollywood scene they’d encounter come Sunday, a day they were anticipating. They weren’t nervous, though, just excited. Any advice from their parents?

“Just to be present and enjoy it and not worry too much,” Dylan said. “I’m so happy to be doing it with my brother. I’m so happy I’m not doing it alone, that I have family here, and he has my back.”

Paris agreed: “It’s comforting knowing that big brother is there, keeping everything in order, showing me the way.”