The actors of the series, out May 15, were outfitted by costume designer Emma Fryer.

Elle Fanning as Catherine the Great in the fourth episode of the series. The wardrobe showcases a color palette of "jewel tones" and "winter fruit" hues, shares costume designer Emma Fryer.

“The Great,” Hulu’s new series starring Elle Fanning and Nicholas Hoult, is another of Australian screenwriter Tony McNamara’s takes on the 18th century.

Similar to “The Favourite” — the Oscar-nominated 2018 film on Britain’s Queen Anne, also created by McNamara and featuring Hoult — “The Great” is an offbeat, comedic dive into the period. The setting, however, is in Russia and title refers to another infamous member of the nobility: Catherine the Great.

“We had a lot of fun fittings,” says English costume designer Emma Fryer of working with the lead cast. She’s calling from London, where she’s been in quarantine. “I remember when Nick had his fitting for his skirt, and we had such fun with that skirt and him trying it on. We started off thinking about it as being sort of still using the underpinnings that you would use with a lady’s skirt. And we put panties on him, and we talked about it, whether he felt it was right or too much.”

Panties, as in pantyhose. “It’s so important that the cast is comfortable in those costumes,” she goes on. “It enables them to feel who the character is. For me, it’s really important that it is a collaboration. It was just so lovely working with Elle and Nick.”

Hoult, 30, took on the role of Peter III of Russia, while Fanning, 22, plays Catherine, Russia’s longest reigning female ruler. Out May 15, the show incorporates historical facts, while exploring a fictionalized account of the empress’ rise.

“When you have an amazing script to work with, you can easily embrace what’s written on the pages,” Fryer says. “It’s the beauty of the job, really.” And it was a collaborative effort with the entire team, she adds. “Tony was great at embracing thoughts and ideas.” 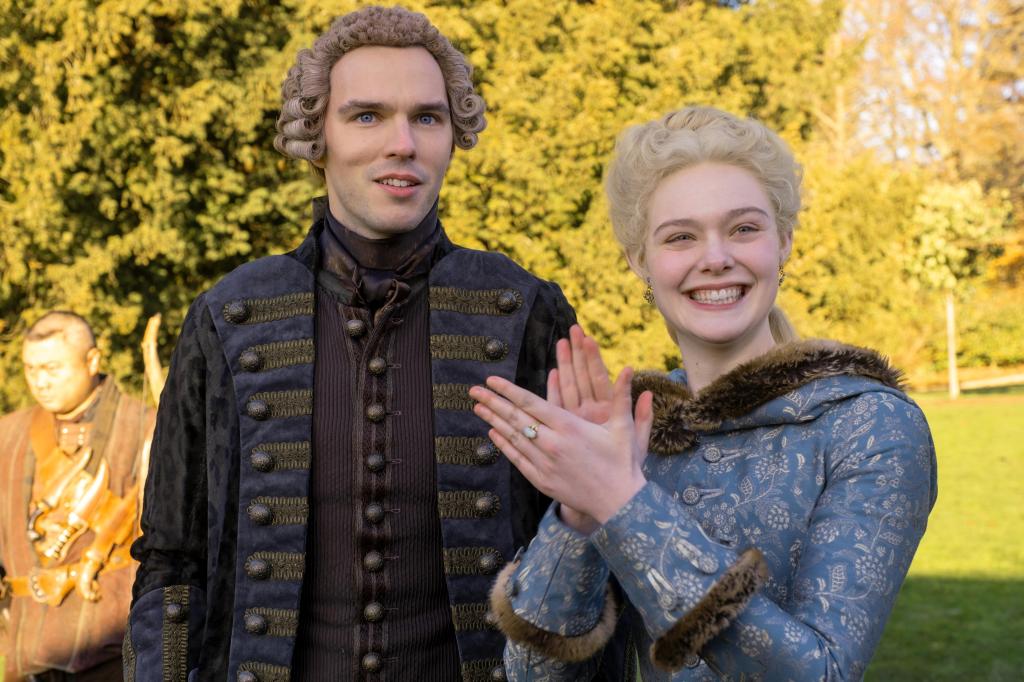 Nicholas Hoult and Elle Fanning as Peter III of Russia and Catherine the Great.  Courtesy

Fryer’s first job in costume design involved making jewelry and headdresses for a movie in the early Nineties. For a few years, she worked at The Royal Opera House in London, and her big break came when she was hired as costume buyer on 1998’s “Shakespeare in Love.”

“In the last few years, I’ve done a mix of period and contemporary projects,” she says. Before taking on “The Great,” she was working in France on the Julia Stiles-led series “Riviera,” which showcases a high-end contemporary wardrobe.

“Jumping from that to the 18th-century world, my job is still to help, in a collaborative way, actors find their characters through their clothes,” she adds. She began shooting “The Great” in August 2019 and wrapped in February. “That doesn’t change, whether it’s a period job or modern job, but [there] is a slight difference when you’re making costumes.”

Most of the looks in “The Great,” including all those worn by the main cast, were made. “Jewel tones and winter fruit colors” was the color palette of the Russian court, which historically dressed “in a European way.” 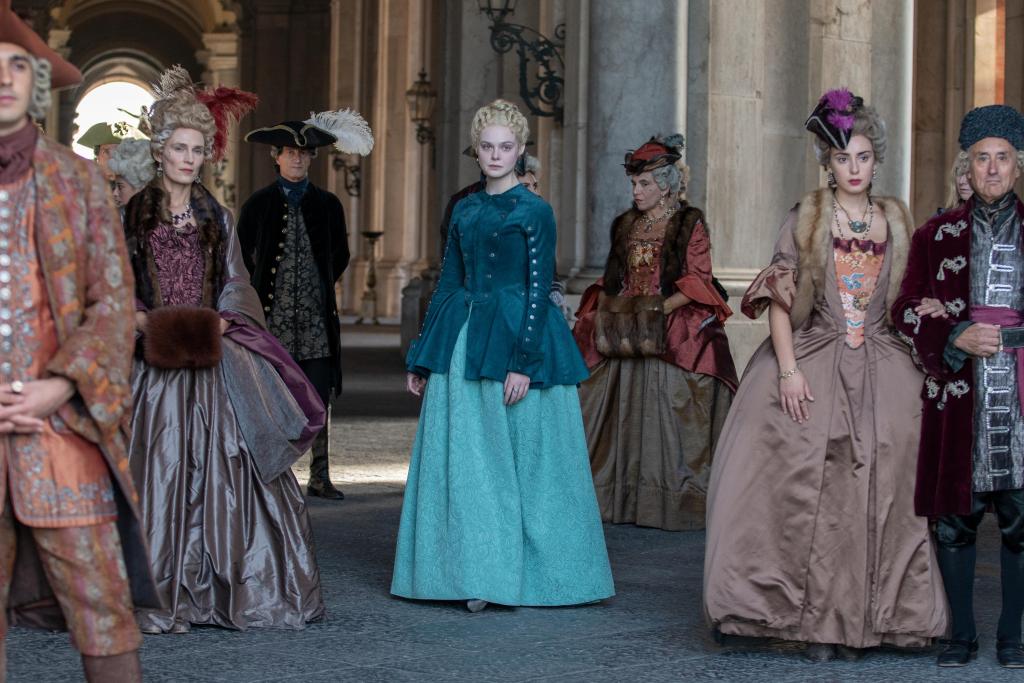 “It’s so important that the cast is comfortable in those costumes,” Fryer says. “It enables them to feel who the character is.”  Courtesy

Fryer introduces a modern feel by incorporating fabrics that weren’t necessarily of the period, she says, and found inspiration while, for example, strolling the shop floor at Harrods in London.

“It was the small things, the shape of a sleeve, the decorations done on dresses,” she continues. While studying historical paintings of the royals, she also took a look at contemporary brands such as Versace, Alexander McQueen and Dior. “It was all put on mood boards.…It could be a pattern on a fabric or a piece of jewelry, but somehow you hit upon something and find the character.”

The very first item created for Fanning as Catherine the Great was a corset to ensure the silhouette was correct.

“She starts off as a young woman who arrives in this unsavory court,” explains Fryer. Most striking throughout the show is the way the costume designer reflects the character’s journey in the color palette of the clothes she wears. “The light colors in the beginning is how she’s portrayed, an idealistic, romantic, whimsical young woman arriving in Russia [from Poland] for this arranged marriage.

“She’s just full of love and sunshine and that slowly disappears as she realizes she’s in this crazy, mad court,” she continues. “Her palette changes a bit as Leo is introduced into her world.”

Leo, played by actor Sebastian de Souza, is an aristocrat who falls in love with Catherine. “He’s this sort of charming, witty, happy-go-lucky kind of guy,” she adds. “He brings that element of joy back into her life. I wanted to pull them together as a couple, and she ended up having more green in her wardrobe at that point. And then slowly, as the coup [d’état] starts and we realize she’s this intelligent woman — we see glimpses of that — led by the script, the palette changes.”

In the end, Catherine is seen in strong, bold colors. “That huge splash of color was an ode to what she can do,” Fryer says. “It gives the audience a sense of her greatness.” 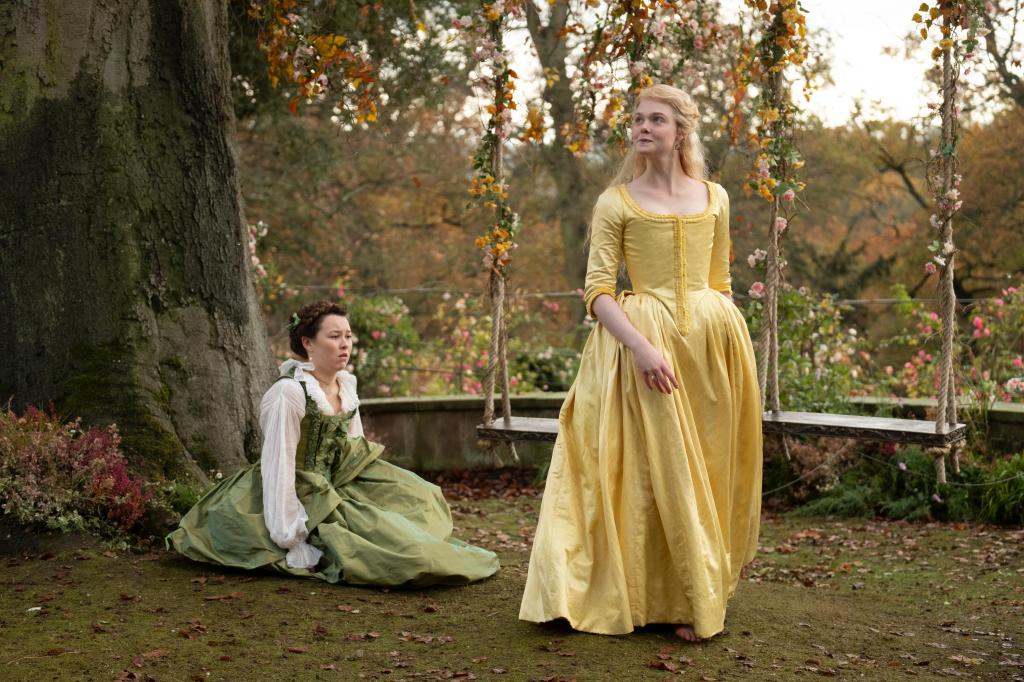 Elle Fanning as Catherine the Great early on in the show. “The light colors in the beginning is how she’s portrayed, an idealistic, romantic, whimsical young woman arriving in Russia for this arranged marriage,” shares Fryer.  Courtesy