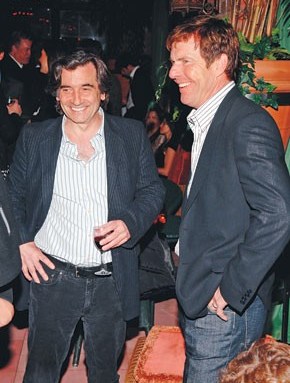 No one sung “Kumbaya” at Tuesday night’s Natural Resources Defense Council “Forces for Nature” bash, but the event was as organic as a party held at Cipriani 42nd Street could get. The vegetarian lasagna was cooked with sustainably harvested ingredients; the program was made from recycled paper; the tulips were sourced from within 100 miles of the city, and organizers purchased renewable energy credits to offset the global warming emissions associated with guests’ travel to the dinner. (Too bad there wasn’t enough air-conditioning to offset the global warming occurring in the dining room.)

Bank of America chief Ken Lewis and Mayor Michael Bloomberg were honored by the crowd, which included Laurie David, Dixon and Arriana Boardman, Tom and Kathy Freston and Chevy Chase. Christopher Mason serenaded Bloomberg with a slightly awkward medley on a portable keyboard, turning tunes like the Jackson 5’s “ABC” into “PlaNYC” after the mayor’s environmental initiative. The mayor and his girlfriend, Diana Taylor, then made a quick exit to catch the Yankees’ season-opening game. “And for the record,” he said, “we’re taking IRT.”

A few blocks away, Blythe Danner, Patricia Clarkson and Parker Posey filed into MoMA for a screening of Thomas McCarthy’s sophomore directorial effort “The Visitor.” “You will never guess where I bought these earrings,” bragged Clarkson clad in a Dolce & Gabbana dress. “Sears! They came free with a washer and dryer.”

Nearby, Tina Brown and Vicky Ward cohosted a party for Susan Nagel’s book, “Marie Therese: Child of Terror,” a biography of Marie Antoinette’s daughter, who spent years in prison, was never told how her father died, and married Louis Antoine, who served as the king of France for exactly 20 minutes. (It was the middle of another revolution in France.) “It was just a horrifying life,” said Brown. “And I think people must have just been different back then. You couldn’t complain. It wasn’t like now where you can go on Oprah.”

On Monday, the film “Smart People,” was screened by the Cinema Society and Allure’s Linda Wells at the Landmark Sunshine Theater. As the title suggests, the movie depicts a slew of brainy folks, including a Carnegie Mellon professor (Dennis Quaid) and his ne’er-do-well brother (Thomas Haden Church) partaking in some less-than-genius antics. Post-screening, co-star Sarah Jessica Parker and hubby Matthew Broderick headed to the Bowery Hotel with Eva Amurri, Jane Fonda, Jessica Seinfeld, Rocco DiSpirito, Isla Fisher and Cynthia Nixon. Quaid, accompanied by his teenage son Jack, was uncertain he’d been appropriately cast. “I’m not really all that smart,” he said.

In Los Angeles, stylists Britt Bardo and Jewels threw a rooftop luncheon at the Roosevelt Hotel on Tuesday to celebrate the launch of their new line, Rose. In attendance were Elizabeth Banks, Sarah Chalke and Eva Mendes, fresh from shooting the latest Calvin Klein perfume and underwear ads and wearing a floor-length Rose gown. She may have been a bit overdressed for the casual affair, but Mendes has a rule to not leave the house without looking put together. “These days, you never know,” she said. “The paparazzi jump out of the bushes at you.”