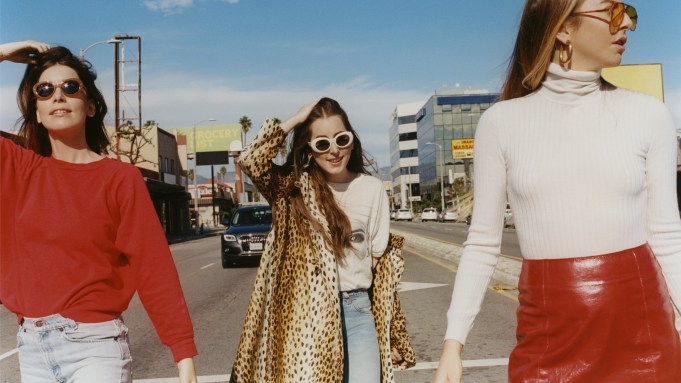 “Why don’t we just throw a party this weekend?”

A few weekends ahead of the release of their sophomore album, the Haim sisters (Alana, Este and Danielle) surprised a few hundred people with a pop-up show that included a cover of Shania Twain’s “Man! I Feel Like a Woman,” limited edition merch, and donations to Planned Parenthood.

The Los Angeles trio might be on their way to proving their worth past a buzzy debut record (the second effort “Something to Tell You” is out today), but they’re still having as much fun as ever.

“We would like to say that they are kind of like sisters,” Alana says of the two albums. “But we always kind of write songs one way. I think we kind of continue that vibe with this record.”

Their breakout debut, 2013’s “Days Are Gone,” catapulted them to global success, with invites to the Met Gala (in 2016, dressed fittingly by the Rodarte sisters), the CFDA awards (this year alongside Diane von Furstenberg in her namesake label), and a well-Instagrammed friendship with one Taylor Swift. Today, though, it’s coming back to the music. 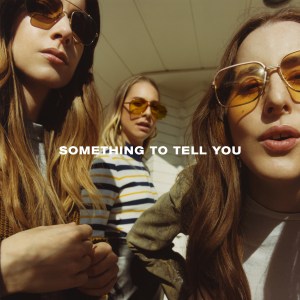 “We toured for three years, and when we came home, we were excited to get the ball rolling,” Alana says. “We parked and immediately went to our parents’ house. It took us a little bit to gear up to writing good songs. Writing songs is like a muscle, and we were on tour for three years… I mean, you don’t lose it, but you have to gear up for it. You have to keep writing every day.”

The record then is their response to processing the success (and fame) that came from the first. “This record was really just us decompressing after so much touring,” Alana continues. “We love touring, but when you get home, you go from 100 to zero. We spent time decompressing and realizing what we had just done for three years – traveling the world and playing shows. We went through a lot of things – and now they are on the record.”

The learning curve over the last three years has been no short of steep. “I had hardly ever even left the United States,” Alana says. “I never really traveled, and all of a sudden, I wake up and I’m in Iceland or Australia or Japan. I remember being in Mr. Ensler’s class opening up my history book and thinking, ‘I hope one day I get to see these places.’”

Betty Who on the Rise