The Hills Are Alive

A brigade of foreigners hit Los Angeles over the last week for a series of fashion events that had the bubbly flowing. 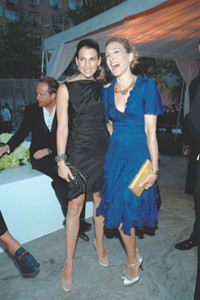 A brigade of foreigners hit Los Angeles over the last week for a series of fashion events that had the bubbly flowing. First, locals filled a Hollywood Hills mansion for the official unveiling of Karl Lagerfeld‘s second collaboration with Dom Pérignon — an ad campaign for Rosé Vintage 1996 photographed by Lagerfeld himself and starring Eva Herzigova. “I never do the same thing twice so we came to Hollywood, which I love this time of year,” the designer said. “The air. The sun. I love driving around in a convertible, especially because spring in Europe was so unpleasant this year.”

Despite a feuding Lindsay Lohan, Paris Hilton and Brandon Davis circulating throughout the party, it went off without a hitch. Devendra Banhart performed “Diamonds Are Forever,” while guests, including Brittany Murphy and a svelte-again Jared Leto looked on. Though the likes of Courtney Love, Maria Bello and Jessica Simpson had come to air-kiss Lagerfeld, others had ulterior motives. “When I saw on the invitation that they’d be serving free Dom all night,” explained Thora Birch, “I knew it would be worth getting dressed for even if I end up on another worst-dressed list.”

Then on Monday, Kelly Lynch drew a crowd to her midcentury aerie in Los Feliz for a Vogue-hosted lunch honoring James Ferragamo. The dashing scion basked in the company of actresses Anjelica Huston, Ever Carradine, Lake Bell, Michele Hicks and Samaire Armstrong while the women set about choosing swatches of python, satin and leather to customize their own pair of shoes. “I really should be a designer,” mused Shiva Rose McDermott. “Sometimes the acting thing is so heart-wrenching, whereas fashion is always fun.”

Meanwhile, across town at a nine-acre Brentwood estate, another Italian was discovering the joys of showing off her wares. Nicola Maramotti of Max Mara breezed into town to act as honorary chair for the Colleague Helpers luncheon, and then was toasted at a dinner later that night. “What great taste everyone in Los Angeles has,” Maramotti marveled. “I had no idea.” To be sure, her first Los Angeles experience skewed toward the glamorous. The next night, she presented Bello with the Max Mara award at the Women in Film gala, then watched Jennifer Lopez, Geena Davis and Edie Falco accept awards in her dresses.

Meanwhile in New York, a scant 24 hours after the CFDA Awards, the swells were out again Tuesday night to honor Joan Tisch and Sarah Jessica Parker at the MoMA’s annual Party in the Garden. Angelenos Steve and Jamie Tisch and Mike Ovitz joined guests including Mayor Michael Bloomberg, Marie-Josée Kravis, Barry Diller, Clarissa and Edgar Bronfman, Veronica Hearst, Aerin and Jane Lauder, Samantha Boardman and Jeff Koons for the Gucci-sponsored affair. Parker swanned in wearing a frock designed specially for her by Frida Giannini. “I usually can’t wear Gucci because I’m short, you know their long dresses with big slits,” she said. Her pal, Jessica Seinfeld, also lamented her height as she showed off her Giambattista Valli number. “It was big and I made it small,” she said. “It wasn’t made for a short Jewish girl like me.”