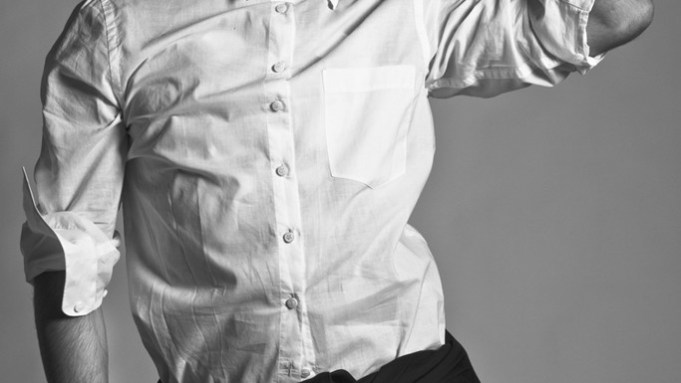 Nicola Formichetti is known far and wide as Thierry Mugler’s creative director and Lady Gaga’s stylist, but on Feb. 9, he will be among Christopher Makos’ featured subjects. Formichetti is expected to be in the crowd and photos of him that appeared in Interview magazine’s Russian edition will be on the walls at the “The Hilton Brothers: Tyrants + Lederhosen” at the Christopher Henry Gallery in Manhattan.

Makos (who, along with his partner, Paul Solberg, collaborate as the Hilton Brothers) said he wasn’t up to speed about Formichetti’s fashion credits, so he did what he always does when starting a new project. “We spoke on the phone and I said to him, ‘Not to be snotty, but I would like to meet you before the shoot,’” Makos said. “He had never really shot with an art photographer. We’ve been friends ever since. We did enough pictures for a book.”

Several of those portraits will be on display when Formichetti opens a pop-up store in Tokyo this spring. In Makos’ photo studio, Gaga’s go-to guy only needed one accomplice, makeup artist Maki Ryoke, for a full transformation. Formichetti is expected at the opening at the Christopher Henry Gallery, where unseen photos of Jean-Michel Basquiat, Debbie Harry and others will be on display.

In addition to the Tyrants + Lederhosen exhibition, the Hilton Brothers have a new book by the same name. The self-described “photo-anthropologists” have packed their artistic travelogue with shots from their globe-trotting travels over the past eight years. Their pal Lou Reed penned an opening essay. Solberg’s 2008 shot of the Chinese artist Ai Weiwei in his Beijing studio is among the more indelible images in the Tyrants + Lederhosen show and book.

Weiwei was detained by Chinese officials for three months last year, and his other work studio in Shanghai was destroyed. Solberg knows firsthand how controversial the artist is considered to be. Twenty-five Chinese artists who were approached to be part of an ongoing Hilton Brothers’ project had one question — “Will Ai Weiwei be in it?” Solberg said, “Once they found out he was, they said ‘no.’ They didn’t want to have any association with him. That’s how isolated he is from the art community.”

Weiwei’s father, Ai Qing, was a Chinese poet who suffered a similar fate during the 1958 Anti-Rightist Movement, and was shipped to a labor camp, Solberg said.

This and other back stories will be shared by the photographers when their show hits the Karl Hutter Fine Art gallery in Beverly Hills on Feb. 18. Their “Lady Warhol” exhibit will make its debut at the Faena Arts Center in Buenos Aires later in November, and the Hilton Brothers will have a solo show in April of 2013 at the Warhol Museum. “We have a lot of work — and a lot of fun,” Solberg said.