Christy Turlington may have just gotten back from a yoga retreat at Parrot Cay with husband Ed Burns and their kids, but all that stretching didn't prepare her for the onslaught of reporters... 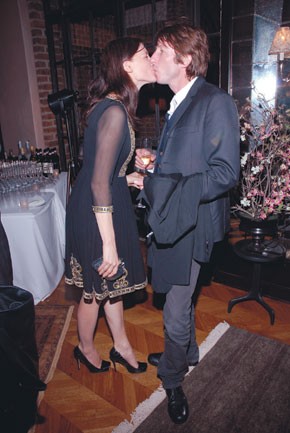 Christy Turlington may have just gotten back from a yoga retreat at Parrot Cay with husband Ed Burns and their kids, but all that stretching didn’t prepare her for the onslaught of reporters before the dinner that Chanel hosted to celebrate the artist program of New York’s Tribeca Film Festival. “I feel like I’m at a junket,” said the supermodel, laughing, surveying a room, which was packed with scribes and photographers. “But I’m just happy that I didn’t have to go uptown.” Other guests, like Natasha Richardson, sought refuge in the lobby, or opted for the patio, like Mary-Kate Olsen, who slipped out and started drinking Amstel Light.

Meanwhile, Mamie Gummer came to support dad Don Gummer, one of the artists tapped for this year’s program, which supplies the prizes for the film festival. “We came in the family Volvo,” she said. “We live just around the corner.” The actress, daughter of Meryl Streep, is currently making her Broadway debut in the Roundabout Theatre’s production of “Les Liaison Dangereuses,” which opens tonight. “I don’t have that big of a part,” she demurred. “There’s a lot of downtime, so I go on Facebook and Google.”

As for “Gossip Girl” Blake Lively, she was living out the part of the budding starlet to a T: She arrived late with on-screen boyfriend (and rumored offscreen squeeze) Penn Badgley, and left through Ago’s side door, paparazzi in hot pursuit.

Nearby, Robert Downey Jr. was calling the Cinema Society and Michael Kors’ showing of “Iron Man” on Monday night “the tastemakers screening.” But the audience was whooping so loud throughout it you thought you were seeing it right in Times Square. “It was the best antiwar action movie I’ve ever seen,” said Tracey Ullman, who mingled with Downey’s co-star Gwyneth Paltrow as well as Terrence Howard, Diana Ross, Aerin Lauder, Liv Tyler and Leelee Sobieski at the after party at Odeon.

Jon Favreau, who directed the film about a weapons manufacturer who turns on his own company to destroy weapons his employer has sold to terrorists in the Middle East, was happy people liked the movie, but thought its message was secondary at best. “I made the movie because my last one [“Zathura”] was a flop and I wanted to make something people would actually see,” he explained.

On Tuesday, The New York City Ballet kicked off its season-long Jerome Robbins Celebration at its annual spring gala. Balletomanes including Ethan Hawke, Michael J. Fox and Lauren Bacall filed into Lincoln Center for the three-part performance, the finale of which included a tribute to Robbins’ “West Side Story.” “Now we’re going to be singing all the way through dinner,” said Hawke afterward. Valentino, Fé Fendi, and Nina Griscom all declared “The Four Seasons” — Robbins’ contemporary choreography set to the classical stylings of Verdi — their favorite. “I’m not a Broadway person,” Griscom explained.

“Yes, Nina hates the West Side,” her husband, real estate broker Leonel Piraino, chimed in. “Oh, wait, I thought you were talking about neighborhoods.”