No. 11: The Kardashians Have Arrived

This was the year the Kardashians defied all rational expectations by becoming even more famous than they already were. 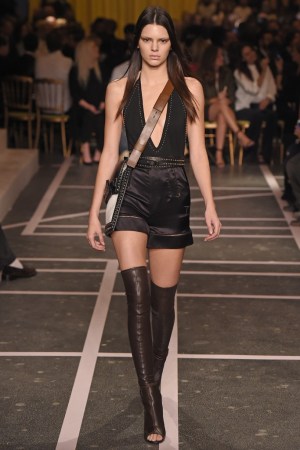 This was the year the Kardashians defied all rational expectations by becoming even more famous than they already were.

Perhaps “more famous” isn’t the way to put it, given the fixed status of the Kardashian-Jenner family — Kourtney, Kim, Khloé and Rob Kardashian and Kris, Kendall, Kylie and Bruce Jenner — in the broad pop culture stratosphere. Rather, they raised their profile, elevating it considerably by way of landmark magazine covers, big business deals and one very exclusive prestige beauty contract. After seven years spent with their noses pressed against the glass of high fashion, the stars of “Keeping Up With the Kardashians” finally wore down the gatekeepers of elite taste, who issued the clan — namely Kim, Kendall and their mom Kris — an engraved invitation to the party.

It started in February when stylist Katie Grand cast Kendall Jenner, the 19-year-old half-sister of Kim, Kourtney and Khloé, in Marc Jacobs’ fall 2014 show. Kendall drew a sizable reaction in look 18, a sheer, breast-baring shirt and jodhpurs. She went on to walk in Giles Deacon’s show as well as Givenchy and Chanel that season.

A month later, Kim appeared on the April cover of Vogue in anticipation of her nuptials to Kanye West. Until then, the rumor had long held that Kim would sooner see her name on the ballot for public office than her face on the cover of American Vogue. Anna Wintour wouldn’t have it. Cracks in that story began to break when Wintour invited Kim to the 2013 Costume Institute Gala, for which Riccardo Tisci, a close collaborator of West’s, was a host. Alas, Kim didn’t land a solo cover, sharing it with West, who stood behind her in a prom pose embrace. According to the Alliance for Audited Media, the issue sold 264,421 issues at the newsstand, which was less than the previous year’s April issue featuring Michelle Obama on the cover.

The couple went on to dominate tabloid coverage the world over with their May wedding in Florence with a trousseau by Tisci and a pre-wedding hosted by Valentino Garavani at the Château de Wideville. They occupied Paris Fashion Week in March with a paparazzi frenzy at Balenciaga and Balmain. It was a wonder why Alexander Wang would even want them there: Once Kanye and Kim, who held their one-year-old daughter North on her lap, were noticed in Balenciaga’s front row, it was almost impossible to pay attention to the collection. Then there was Givenchy, where North had her own seat complete with calligraphed placard. All the better to see her Aunt Kendall walk the runway.

Barring a spectacular scandal or change in career direction, Kendall is poised to be the improbable family member who truly breaks out of the reality TV fame-and-shame game. Fashion has embraced her as a bona fide model, cast on the most elite runways, including Chanel’s July couture and recent Métiers d’Arts in Austria.

If Wintour obliged Kim in April, she’s received Kendall with a bear hug, devoting a 13-page spread to her in Vogue’s December issue timed to the news of her Estée Lauder contract. Typically reserved for the highest tier of celebrity beauties and models, such as Elizabeth Hurley, Gwyneth Paltrow and Joan Smalls, the Lauder deal legitimizes Kendall at another level. In turn, the beauty giant reaps the benefits of Kendall’s network of more than 17 million Instagram followers, 9.26 million on Twitter and 7.4 million Facebook “likes.” The media has dubbed her an “Instagirl.”

Central to the family’s newfound ascension is Tisci, whom the Kardashians can thank and the cynics can blame for extending their celebrity half-life by god knows how much. There is arguably no hotter designer than Tisci working in fashion right now. His vision is as much about creating an image as it is making clothes, and he has made a habit of associating with things widely considered transgressive or vulgar or even ugly and anointing them as chic, whether transgender model Lea T or a reality TV outlier with a sex tape. There’s something artistic about sanctioning such a transformation. Remember, Jeff Koons’ first wife was a professional porn star.

Tisci came to the Kardashians by way of West. Mutual admiration of each other’s lines of work led to a friendship that dates back several years. West and Jay Z asked Tisci to art-direct their collaborative 2011 album “Watch the Throne.”

A few years ago, West was ubiquitous at fashion shows as a fan, not a paid celebrity, sometimes even sitting second row alongside the market editors. A spread from a 2012 feature in Vogue titled “Riccardo Tisci’s Time” featured an improbably topless West seated next to Tisci and surrounded by Liv Tyler, Florence Welch, Karolina Kurkova and Liya Kebede, members of his “gang.” Tisci frequently hashtags the word “gang” on his Instagram account to distinguish his inner circle of friends and muses, including Marina Abramovic, Mariacarla Boscono, Jamie Bochert, Ciara and now Kim Kardashian.

It was Tisci who convinced Carine Roitfeld to put a then-pregnant Kim on the cover of CR Fashion Book last year in a shoot he art-directed and Karl Lagerfeld photographed. Kendall has walked in the past two Givenchy shows and the designer cast her in his fall campaign with Bochert, Boscono, Julia Nobis and Peter Brant Jr.

If the answer to the existential question of why the Kardashians continue to fascinate eludes, the extraordinary numerical data to quantify it is there. With more than 23 million followers, Kim is the third-most-followed account on Instagram. Kendall, Khloé and Kylie are in the top 10, with Kourtney trailing at 14.

It was widely reported that the Kardashians netted $65 million in 2010 for the E! reality show. A renewal in 2012 reportedly earned the family another $40 million. Then there are the spin-offs, promotional tweets, endorsement deals, appearance fees, clothing stores and fashion brand, which had retail sales of $600 million in 2013. Kim’s iPhone game Kim Kardashian: Hollywood by Glu Mobile was projected to earn $200 million in revenue this year.

Now, the level of access and work they’re getting is catching up. When the editors of Paper magazine, a niche publication with a miniscule circulation, enlisted Kim to “Break the Internet” with its November issue, the most remarkable thing was not Kim’s oiled-up bare butt and breasts, or her ability to balance a Champagne coup on her rear end or be a good sport about the numerous memes that resulted. It was the fact that legendary art director Jean-Paul Goude wanted to work with her.

Bloomberg Businessweek recently reported that Kylie, the youngest of the brood, is trending up, rating the highest of the sisters among teenagers. Kourtney and Khloé do their part by tending to the family’s stock and trade on E! with “Kourtney and Khloé Take the Hamptons.”

Kourtney, taking a page from Kim’s book, also recently appeared naked and pregnant on the cover of Du Jour. Meanwhile, as the Kardashian women thrive, the men of the family have all been in free-fall, with brother Rob reportedly suffering from weight problems and depression; Scott Disick, Kourtney’s boyfriend and the father of her children, repeatedly airing his alcohol issues on TV, and the family patriarch, former Olympian Bruce Jenner, now separated from Kris, the subject of sex-change rumors.

There’s still Kim and Kendall to drive up the family stock index.

How high will it go? Nobody knows. But to borrow from Scott Rudin, Kim and the majority of the family will likely remain “a camp event and a celebrity and that’s all.” But Kendall is a supermodel.