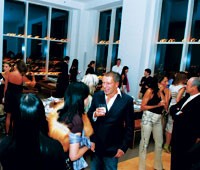 Parker wasn’t referring to the actual city, which was 89 floors below. (The view inspired Rufus Albemarle to declare it “perfect for making love. I would turn off the lights, put in nothing but a double bed and a bucket of champagne.”) She was referring to that fictional city of “Sex and the City,” since she and the Russian, Mikhail Baryshnikov, were reunited for the evening.

“He looks better, if that’s even possible!” she sighed. For the record, Baryshnikov was accompanied by his wife, Lisa Rinehart, and Parker arrived solo. (Matthew Broderick’s new movie, “The Last Shot,” was premiering uptown.)

The evening also honored the Baryshnikov Arts Center, which is scheduled to open on West 37th Street early next year. There for the occasion were Gucci top brass François Pinault, François-Henri Pinault, Serge Weinberg and Robert Polet, along with Vanessa and Billy Getty, Aerin Lauder, Anne Bass, Daphne Guinness, Lauren duPont, Jamie Tisch, Gigi Mortimer, Hope Atherton and Tom Sachs. Bottega Veneta is contributing to the new center by donating a portion of proceeds from five exclusive bags Maier designed for the flagship.

For his part, Maier was just pleased to have Parker as a supporter. “She’s so cute because she has so much personality,” he said. “She’s a good match for us: no labels, just personality.” (Hopefully, Maier is just as fond of Mary J. Blige’s personality even if, earlier in the evening, the singer arrived at the store opening toting a Fendi bag.)

When prompted, however, Parker eagerly ticked off her labels: Fred Leighton brooch, vintage outfit, and Bottega Veneta’s clutch and heels She also said, like the rest of the public, she wasn’t aware that she inspired Patrick Robinson’s spring 2005 collection for Perry Ellis. “I read it in The New York Times!” she squealed, turning to her handler. “All of the girls had really frizzy hair!”

Down in SoHo, the front-row celebs at the Calvin Klein show — Mandy Moore, Hilary Swank and Ashley Olsen — came to toast Francisco Costa and taste-test the sashimi at Lure Fishbar, a yacht-themed restaurant in the former Canteen space, which has just undergone a $2 million renovation by John McDonald and Josh Pickard of Lever House.

According to Swank, who stationed herself at a luxury-liner banquette, the Calvin collection felt like “three different shows.” After some pieces in beige, “it went into a beautiful gray and then an explosion of color,” she said. But her favorite piece of the designer she owns won’t be seen on any runway. “It’s my Sensual Support bra,” she squealed. “No, seriously! I love how sexy it makes me feel.” And it’s not just because she shills for them, Swank promised.

That other front-row fixture, Vincent Gallo, was sitting, somewhat improbably, with Helen Schifter. Gallo doesn’t know why he’s even asked to fashion week. “I keep saying all these nasty things, and yet I keep getting invited back,” he said.

A few blocks east, Narciso Rodriguez celebrated his collection in the construction site of a penthouse at the as-yet-unopened Hotel on Rivington. The crowd included Anna Paquin and Jason Patric, as well as Rodriguez’s front-row pals Rachel Weisz and Jessica Seinfeld, who smoked with the designer on the hotel roof until 1 a.m.

“I’m not that deeply into fashion,” Weisz said. “But I only wear Narciso when I go out at night.”

An even cooler crowd turned up at Frederick’s for a dinner in honor of Another Magazine’s latest covergirl, Natalie Portman, who was having trouble with her Derek Lam dress. “I guess I had it on wrong!” Portman told Zac Posen after a friend rushed up to adjust it.

Also in the crowd were editor Jefferson Hack, Lukas Haas, Helena Christensen, and Björk, in a pair of skinny braids that crisscrossed her heart-shaped face and what appeared to be a bird’s nest in her hair. Even Brooke Shields came by.

“I haven’t been able to go to anything for fashion week,” said Shields, who has been rehearsing her role in “Wonderful Town.” “Tonight I finally said, ‘All right, enough! I’m going out!’”