The Many Lives of Rosamond Bernier

The writer's latest, “Some of My Lives: A Scrapbook Memoir,” looks back at her encounters and friendships with major cultural figures of the 20th century. 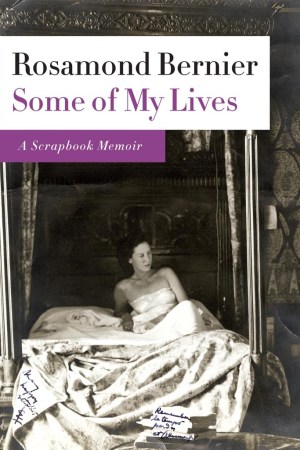 Most people would be satisfied with one good, fulfilling life. But with the variety of existences she has led, Rosamond Bernier seems to be emulating the proverbial cat.

With her first husband, Lewis A. Riley Jr., she lived in Acapulco, Mexico, when it was a quiet backwater and where she helped organize art exhibitions. Next, she became a writer for Vogue, then launched and edited a well-respected arts magazine, L’OEil, in Paris. In 1970, Bernier returned to the U.S. and began a unique career as a lecturer, speaking, usually without notes, about the great figures in the arts whom she had known.

Now she has written a book, “Some of My Lives” (Farrar, Straus & Giroux), about exactly that. How did she manage to encounter — and often befriend — seemingly all of the major cultural figures of the 20th century? “It was because I was interested in them,” she says.

She later adds, “I think luck has a lot to do with things — and timing. My mother died when I was only eight, and my father got a French governess. It was sheer chance that I happen to speak fluent French.”

It probably didn’t hurt that she was also a slender beauty with fine features who wore clothes well and possessed charm in abundance.

Bernier, who is 95, was born in Philadelphia to a Jewish father, Samuel Rosenbaum, a lawyer, and an Episcopalian mother, Rosamond Rawlins. While performing as a harpist in youth orchestras, she met Leopold Stokowski. During a summer break after her sophomore year at Sarah Lawrence, she went to Mexico, where she first met Aaron Copland, Frieda Kahlo and Diego Rivera. She also encountered her first husband and dropped out of college to marry him. She had a menagerie — an ocelot, a coatimundi, an anteater, two spider monkeys, a kinkajou with a drinking problem, a marmoset and two macaws — and learned to fly a plane. “Coatimundis are the cleverest animals, and they love perfume,” she says. “They would watch for a chance to knock a bottle over to sniff it.” They also sneaked eggs from the kitchen, which they ate with their shells on.

Bernier and Riley put together exhibitions of paintings, including a traveling one of North American works which was intended to help advance the Good Neighbor Policy.

The marriage didn’t last, although it ended without rancor. (In an amusing twist, Riley later married Dolores Del Rio.) Bernier was still living in Mexico when she loaned a small house she owned to Nada Patcevitch, the wife of a top Condé Nast honcho, Iva Patcevitch, who was trying to recover from a splintered love affair. When Bernier visited New York on what was meant to be a short trip, she was offered jobs at Vogue by Iva, editor in chief Edna Chase and features editor Allene Talmey. So she decided to stay. Beginning as a fashion editor, she supervised shoots, but she also tried to get involved in other areas of the magazine, overseeing portrait photographs for artists and the like. In 1947, Vogue sent her to Paris to find out what was going on in the arts there after the war.

One of the first ideas she came up with was to look up and document people and places that had been associated with Marcel Proust. Bernier went to interview them, with Erwin Blumenfeld as her photographer. One was Jean Cocteau, who described Proust as a fascinating talker who mesmerized his listeners. Late at night, in his dusty rooms (he thought cleaning aggravated his asthma), he would read from “Swann’s Way” for his friends, displaying a remarkable modesty. As Cocteau remembered it, “He would repeat, ‘It’s too silly.…I really can’t go on,’ and apologize for making [his guests] listen to such foolish stuff.”

She also approached Henri Matisse and Pablo Picasso for other articles, becoming sufficiently friendly with the latter that he gave her two important scoops, one about the paintings he was doing in Antibes at the time. (“I amused him,” she says.) Matisse gave her the first look at what he was doing at the chapel in Venice. But Bernier felt that these scoops were neither treated with sufficient respect by Vogue nor given the exposure they deserved. “They hardly gave me a byline,” she says. So, in 1955, she and her second husband, Georges Bernier, decided to launch their own monthly magazine of the arts, L’OEil.

Picasso gave her another scoop to jump-start their new publication by observing that there were a number of unheralded early paintings at his family’s place in Spain. Since he had vowed that he would not return to his homeland while Francisco Franco was in power, Bernier went there to see his relatives without him and had pictures taken of the work. The unknown paintings were allotted six pages in Life Magazine, and everything began with a bang.

L’OEil was well-received. But things didn’t always go so smoothly. At one point, Bernier had commissioned Andre Breton to write an article about Picabia. The deadline came and went, and there was no sign of Breton’s story. Finally, the photos were on the press, and Bernier called frantically requesting the copy. Then, as she writes, he responded: “‘Madame, in spite of my high regard for you, I regret to tell you that I cannot write your article.’ ‘Why not?’ I gasped. ‘Because I have been bewitched by an evil object.’” Entreaties to get rid of the object fell on deaf ears. Bernier had to substitute an article in the voice of the painter’s widow, Gabrielle Buffet Picabia, which Bernier had actually ghost-written, based on an interview with Gabrielle and on Picabia’s memoirs.

Bernier went with Miro to his native Barcelona for a story; he, like Picasso, appreciated the fact that she spoke Spanish. She interviewed Henry Moore, who told her about going to Buckingham Palace for a luncheon to meet Queen Elizabeth. After the repast, each guest got into a line and was meant to have a short time to talk with her. But the little man before him got into a very animated conversation with the monarch, leaving Moore only a few seconds. It turned out that the favored fellow was the Queen’s jockey. With Fernand Leger, Bernier developed a bond, because, whenever he asked her which were her favorite pictures of those currently in his studio, she would always choose the more difficult ones, which he liked himself. “You’re a good girl; you have a strong stomach,” he told her.

“After the war, European intellectuals were quite anti-American,” she notes. “They would often say, ‘We didn’t think you were American at all.’”

After 20 years, however, without warning, Bernier’s husband Georges suddenly let her know that their marriage was at an end. He sought to get — and eventually did get — all their major assets: the magazine, the place in Paris and the house in the country. Rosamond was at a loose end, and she decided to go to New York after her 1970 divorce. She had begun a relationship with the art critic John Russell, who had sometimes written for her at L’OEil and who, it turns out, had long been in love with her. He left his job at The Sunday Times of London to come with her.

Meanwhile, her longtime friend Michael Mahoney had heard Bernier speak articulately about art at social events, and he had recently become head of the art department of Trinity College in Hartford. He engaged her to do 14 lectures for him. Then Dominique de Menil got her to speak at Rice University in Houston. Before long, Bernier was lecturing at the Metropolitan Museum of Art — where she eventually appeared more than 240 times — and even in Paris. Since her initial Met engagements were in the evening, she decided to dress up, as if for a party, and she acquired a repertoire of stylish, striking looks for performances. In the meantime, Russell had found a position at The New York Times, and their old friend Philip Johnson insisted that they get married. “It was entirely engineered by Philip,” she says. He hosted the 1975 ceremony at his Glass House, and the guests included best man Pierre Matisse, Leo Castelli, John Ashbery, Virgil Thomson, Helen Frankethaler, Stephen Spender, Copland and Andy Warhol.

The pair were regarded by their friends as a great love match. “He always came to all my lectures at the Met and sent me flowers,” she says. The book is dedicated to him. Russell died in 2008. Bernier lives on in the apartment they shared on the Upper East Side, which has a continental look, with French furniture, fine fabrics and orchids. There are distinctive works of art everywhere, some made for the two of them, including Louise Bourgeois’ sculpture of the couple’s four hands with John’s foot.

And she has had the last laugh. How did her second husband manage to acquire everything from their marriage? “He was very unscrupulous,” Bernier says. “But I got it all back.”