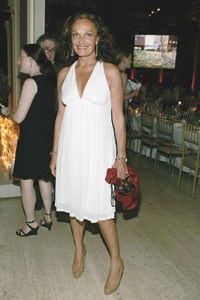 Fireworks, beach trips, summer reading and monumentally expensive airfares and hotel rooms. It’s another Fourth of July weekend. So where is the jet set headed to this year?

Nina Griscom: I’ll be in Southampton. I have a beach party one night, I’ll be seeing friends and playing tennis with Peggy Siegal, Gigi Mortimer, Tory Burch and Perri Peltz Ruttenberg. We’ve been e-mailing back and forth to set up the games. It’s insane.

Diane von Furstenberg : I will be on the boat with Barry [Diller] and two of my grandchildren. We will be going to Provincetown and Martha’s Vineyard….I am finishing “Snow” from Turkish writer Orhan Pamuk, and also have with me Ava Gardner’s biography, as well as the biography of Dominique Aury, the woman who wrote “The Story of O.” No hiking this weekend, but walks in the dunes and puzzles with the kids!

Helen Schifter: We just came back from Paris and Capri, so we’re going to plunk down in the potato fields in Sagaponack. We’re going to the fireworks in Southampton and a big beach barbecue that our friend Dana Hammond is having. I also have one day to learn how to drive a stick because we’re getting one of those Mini Coopers and Tim is going away and taking the other car. So it’s shift or bust.

Cecilia Dean: I will be going to Paris for the couture. My friend Giorgio Pace is having a dinner party for me and my friend Anne Christensen and that will be our little Fourth of July celebration.

Tinsley Mortimer: I’m going to Saint-Tropez with my husband, my brother-in-law and my sister. I really just want to relax, but I feel that’s not going to happen. I don’t think it’s really a town where you’re supposed to just relax.

Thelma Golden: I’m going to Miami. I’m staying at The Standard doing absolutely nothing. I’ll be out by the pool having a million treatments and reading 10 books. I’m reading the new Andrea Lee novel, I want to reread Salman Rushdie’s “Midnight’s Children” and I’m a hundred pages into the new Taylor Branch book. It’s not exactly beach reading, but I’m digging deep into that.

Samantha Gregory: I’ll be hibernating at my parents’ house in Southampton hiding from the crowds in town. I’m going to an ashram in California in two weeks, so I have to prepare. It’s 20 miles of hiking a day and two hours of yoga, and I have to give up caffeine this weekend.

Muffie Potter Aston: We’re heading out to Locust Valley on the north shore of Long Island. We’ll be going to the Piping Rock Country Club for the Fourth of July fireworks. It’s nothing fancy, but that’s what I like about it. It’s about hamburgers and grilled chicken and coleslaw, traditional picnic fare. About 12 years ago, I went to London for Wimbledon, and there was a feeling that I was just sort of missing something not being in America for what I think is the most important holiday for our country. Whether or not you’re mad about the current political situation here, I think you still miss the U.S. if you’re not here for the Fourth of July.