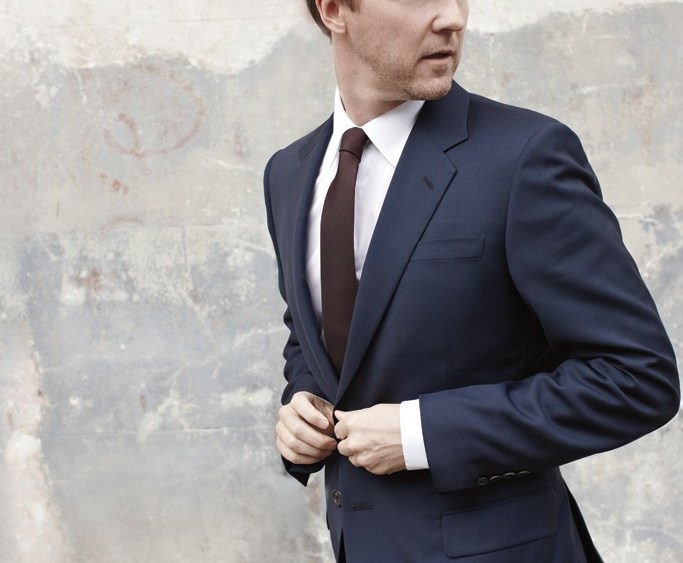 The Pershing Square Signature Center sits on a relatively quiet block of 42nd Street in Manhattan, on the westernmost edge of what could still conceivably be considered the Times Square Theater District. The ambitious new playhouse is all blond wood and glass. It is the kind of open space that inspires hushed tones from its inhabitants, which at 5 p.m. on a Wednesday in early May means all of six patrons. Seven if you add Edward Norton, distinguished alum of the Signature Theatre company and champion of its gleaming new space, who is sitting at a café table sipping a late-afternoon latte.

He’s got a two-day beard, and his black dress shirt is two buttons undone. He has the faintest of bags under his pale blue eyes, the ones that on-screen almost always seem to be somewhere between sad and intense but today just look a little tired.

It could be that he’s still recovering from his trip to the Met gala, and an ensuing late night, earlier in the week. “My girlfriend says I have a crush on Anna [Wintour],” he says with a laugh. “It’s possible.”

Or it could be that he handed in his years-in-the-works screen adaptation of Jonathan Lethem’s Motherless Brooklyn the week previous and is still in the post-file daze. “Sometimes a deadline actually helps,” he says.

Or maybe it’s just the weight of the building around him.

Norton has spent the last several years leading the capital campaign to raise the nearly $70 million in funds needed for the center. With its three stages, subsidized ticket prices, public café and bookstore, and mission to keep theatergoing from becoming a “rarefied experience,” the Signature Center is a shiny new Frank Gehry-designed jewel of the New York arts world. It has also been central to Norton’s recent midcareer turn as New York City civic crusader.

“This,” he says, considering the space around him, “in the last three years, represented a much, much more thrilling and terrifying and vital and crushing personal challenge to me than a lot of creative work at this point.”

Norton is 42 now and almost 20 years out from his first big off-Broadway break, when Signature founder James Houghton cast him in a 1993 production of Edward Albee’s Fragments. Three years later, he earned an Academy Award nomination for his screen debut in Primal Fear, a performance that presaged an unrivaled run of late Nineties and early Aughts prestige pieces: The People vs. Larry Flynt, American History X (another Academy Award nomination), Fight Club, 25th Hour.

In the last 10 years, though, his work has come in more concentrated bursts as he’s taken the time to pursue his interests outside of acting. He got his pilot’s license. He’s been an activist for causes as varied as solar energy and the Maasai Wilderness Conservation Trust. He earned an appointment to the President’s Committee on the Arts and the Humanities. Before he was selling donors on the Signature Center out of his downtown apartment, he was a very public advocate for Manhattan’s instantly beloved High Line park. In fact, Norton has had only two leading roles since 2008 and, before May’s Moonrise Kingdom, hadn’t been on-screen since 2010.

Sitting in the café, it’s suggested to him that perhaps such spectacular success so early meant that he’s had to work harder to stay interested in moviemaking, that maybe his more careful role selection and involvement in New York civic projects is an outgrowth of some sort of creative ennui. Norton responds with a long and pretty persuasive discourse, excerpted only briefly here, on the economics of Nineties filmmaking and the import of realizing your historical moment.

“In the last few years, I’ve worked harder on things, on different sorts of things, than [what] I was working really hard on when I was 26, 27,” he says. “I really was willing to prioritize finding things that I thought had something to say that were particular to my generation, what people I knew felt like. You only get a certain amount of time to do that. In the late Nineties, there was an opportunity; there was something going on in the film business….You could get American History X made at a studio. You could
get Fight Club made at a studio.”

Norton’s most impressive personality trait is his ability to craft these classroom-ready cultural narratives. He does it again when talking about his work with the Signature Center and the High Line, name-checking Joe Papp and Jane Jacobs and offering up asides like this: “I’ve become totally sure that all the best things we all look back on and go, ‘Wow, that’s amazing,’ felt completely half-baked for at the least the first quarter.…There’s a certain power in that.”

It’s as if the golden age of the Hollywood-backed “indie,” or the cultural landscape of post-9/11 New York, are chapters in an unfolding novel, and he knows exactly where to slot himself as a character. In an hour and change of talking to Norton, one gets the sense that had things broken another way, he might not have made a bad city-desk editor on a daily newspaper, or maybe an assistant professor of urban studies at a progressive liberal-arts college.

Norton’s family background sheds some light on all of this. His mother taught English; his father worked as a U.S. attorney under the Carter administration and was an early champion of the environmental movement. His maternal grandfather was James Rouse, the real estate executive and urban planner (who, in a nice little historical daisy chain, was an early patron of Gehry’s). Raised in Columbia, Md., Norton grew up in a town built by his grandfather.

Of course, his narrative confidence has also informed some of the more peculiar episodes in Norton’s acting career. American History X director Tony Kaye famously attempted to have his name taken off the film after complaining that Norton had too much of a hand in its final edit. More recently, after declining to have Norton back to play the Hulk in this summer’s Avengers film—despite his starring role in The Incredible Hulk in 2008—Marvel Studios took the extraordinary step of explicitly stating that it was looking for a more “collaborative” actor. (Norton posted a gracious, high-road response on his Facebook page.)

Norton is returning to acting this summer in two films from very singular directors. Last month he figured as an all-right-angles scoutmaster in the ensemble of Wes Anderson’s Moonrise Kingdom. In August, he’ll play a nefarious CIA handler in The Bourne Legacy, Tony Gilroy’s reboot of the series, starring Jeremy Renner. Both projects appealed to Norton, he says, in part because they are the product of directors with crystal-clear sensibilities.

“I think the very best filmmakers kind of make the same movie over and over again,” Norton says. “Wes’ movies all have young people trying to figure out who they are. They all have people who are hunting to feel that they belong. And he’s always got something in there about the paradox of family: that family makes you feel at home and also ruins your life….Tony Gilroy falls into that camp, too. I’m not sure that I would have at first blush said I’m going to [appear in] this series, but I’ve gotten off my own snobbery…because I had really fun experiences on things like Red Dragon.”

By now, Norton’s latte is all but downed and the pre-curtain rush is starting to pick up. The early idlers have multiplied sixfold. The room seems as populated by young actors, playwrights and theater techs as it is by the neighborhood’s rent-stabilized sixty- and seventysomethings, thesort of people who have exceedingly fewer public spaces to read a Sue Grafton book. It feels a bit like the midday rush in a particularly grandiose New York Public Library branch, which perhaps is the point.

“I’m not rushing to tackle more stuff like this,” Norton says of his to-do list now that the center is complete. He may direct Motherless Brooklyn, though he’s still a little unsure. Otherwise, he says, he’s ready to not have “so much left-brain-heavy obligation, high-pressure kind of stuff” on his plate.

“Part of the reason I thought it was worth anteing up that special effort is that I don’t expect to see that many things like the High Line, or many things like this,” he goes on. “They kind of show and you go, ‘OK, this is one of those moments. It’s worth rolling up the sleeves and doing something.’ ”

Norton is shortly off to meet a friend up the street, but before he goes, he recalls taking Barry Diller, who with Diane von Furstenberg eventually underwrote the center’s showpiece staircase, to see the space while it was still under construction.

“This place was literally poured concrete and electrical ductwork, and Barry walked around and said, ‘This is forever.’ ” Norton says. “It made me feel good, because if you can get a few things like this done, you know, that’s the way this city keeps remaking itself into the place you want to stay.”

At that instant, the café’s PA system happens to be pumping in Frank Sinatra singing “New York, New York.” If he notices it, Norton doesn’t let on.