A group of young French chefs is rocking the culinary world. 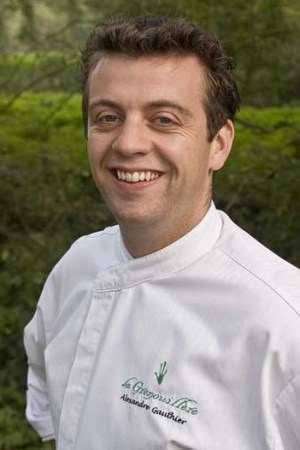 A group of young French chefs is rocking the culinary world.

Its adventurous flavors aside, the group of edgy and influential young French chefs known as Generations.C even has its own informal dress code. “Some call us the ravens,” chuckles chef Eric Guerin, 36, referring to the black shirts his peers tend to wear at their informal gatherings.

Founded three years ago by Paris chef Gilles Choukroun, the organization has swelled to more than 80 members who are rocking France’s staid culinary scene with their senses of humor, relaxed sensibility and outlandish personal styles—including everything from earrings to tattoos.

And because Generations.C’s motto is “united we stand,” as the perky Flora Mikula puts it, they thrive in groups in an industry otherwise known for its heated competition, motivated by ego and the drive for celebrity. “It’s more fun to do things as a group and to show different styles of cooking,” says Mikula, who owns an eponymous restaurant on Paris’ posh Avenue George V.

As most of the Generations.Cs are based in remote regions of France, members meet on a regular basis to share their experiences and recipes and to have a good time.

“It’s about communication and exchange. It’s an open-minded spirit. We are not in competition,” says Johann Leclerre, 30, who won the title of Meilleur Ouvrier de France 2007, which translates to “most skilled cook in 2007,” and who owns two restaurants located near La Rochelle on the Atlantic coast.

“We share and we are not afraid of unveiling what we do in our restaurants,” adds Laurent Trochain, 36, who got his first star three years ago at his restaurant in the Yvelines, west of Paris.

“We talk about everything,” Mikula agrees. “I wouldn’t say that we do better than the older generation, but they were not as open as we are.”

“At first, we were seen as revolutionaries,” notes David Zuddas, 41, who has boasted a Michelin star at his Auberge de la Charme in Prenois, near Dijon, since 1998 and is the current president of Generations.C.

“Some said we did not respect the older generation, but that’s not true,” says Guerin, 36, who earned a Michelin star at his Marre aux Oiseaux restaurant, in Saint Joachim, Southern Brittany, in 2000.

For most of these chefs, cooking is a way to express themselves in their own style and sensibility. And their kitchens deliver an innovative and, at times, astonishing cuisine. William Ledeuil, a discreet chef who just snatched a Michelin star this month, and whose world food cooking is inspired by his travels to Eastern Asia, calls it an author’s cuisine. “It’s like a story—it expresses feelings, desires, discoveries,” he explains from his ZeKitchen Galerie restaurant in Paris’ 6th arrondissement.

Over in the Drôme region, in the southeast of France, Cedric Denaux, 35, who has a passion for botany, includes roots and flowers in his recipes. “Eating violets with roots—that’s my future,” Denaux says at a recent gathering of foodies, where he was making dashi, a broth inspired by Japanese cooking made of acorn syrup, pine tree needles, violets, bears garlic—a special mountain garlic—and other weird roots he picks himself.

As for Guerin—who is infatuated with birds, flowers, Japan, Africa and looks like he just graduated from college—his cuisine is rich in regional flavors, from the Orient to the Occident. According to the season, his menu will feature yellow pollack with green lemon and Helianthus puree and tangerine emulsion or duck foie gras with caraway and ginger carrots.

Guerin explains that, thanks to the drive of the association, his collaborators are eager to discover what other chefs do. Out of their exchanges, new concepts sometimes see the light of day, such as Froggy’s Tavern, the convivial and conceptual rotisserie Alexandre Gauthier recently opened in the northwest of France, near le Touquet, where he also runs L’Auberge de la Grenoullière with his father.

“This opening totally came out of the exchange I had with the members of Generations.C,” stresses the 27-year-old chef, who was invited to prepare the food for the Louis Vuitton Beijing store opening in 2005.

The creation of Generations.C clearly has put all these young chefs in the spotlight, but while the media is hot on their story and their look, that doesn’t distract them from their central task. “Cooking is all my life,” says Romuald Royer, 27, who decided to become a chef after he attended an Hervé This conference while he was studying to become a pharmacist. According to Royer, the famous scientist—who specialized in molecular gastronomic science—put so much passion in his speech that it convinced the then-18-year-old Royer to put himself behind a stove.

Meanwhile, they also know how to take a break from their jobs. Royer loves to paint abstract paintings, Zuddas rides Harley-Davidson motorcycles and Guerin escapes to Africa to take photos and live among wild birds. Most of them hop on a plane to Japan any chance they get.

“We have to show we are happy. It’s our image and the image of our restaurants,” says Denaux.